By Jim Maltzman: Josh Warrington posted a big thank you to his fans that paid their hard-earned money to come to watch his fight last Saturday night against Mauricio Lara at the Headingley Stadium in Leeds, England. The fight was ruled a two round technical draw.

Lara, 23, suffered a terrible cut over his left eye in the second round when he had a clash of heads with Warrington. It was a case of Warrington lifting his head up after coming in low on the attack. It was purely accidental, and just an unfortunate circumstance.

What makes boxing fans suspect that it was intentional on Warrington’s part in the fight-ending clash of head was that he’d already banged into him several times before that.

Boxing fans are split on how they view what happened with the fight-ending head clash in the second.

While some fans believe it was an accidental head-clash, other fans believe Warrington intentionally head-butted Lara because he wanted to get out of the fight.

Some fans villainized Warrington for the way the fight ended, as they felt he lost his nerve and chose to take the easy way out by fouling Lara.

Fans say that Warrington was leading with his head when charging forward and the result was Lara suffered a terrible cut.

“Clash of heads. Maybe it was a little reckless as I dived in,” said Josh Warrington to iFL TV on his head clash with Lara last Saturday. “I feel responsible.

“I don’t know why. I wanted to deliver the win, and I didn’t deliver it. So I feel responsible for that. I know these things can happen. They paid a lot of money, and they wanted to see Josh’s arm get raised.

“You have to keep your head down, and heads come up. But he [Lara] had a little nick in the first round, that was a punch. I felt like if it had gone to the third round, I would have put it on him a little bit. I thought, ‘He can’t catch me unless I let him.’ I saw so many openings.

“I don’t know. It was written up nice,” said Warrington when asked if it was fate that the fight ended the way it did. “It was the first big show post-pandemic.

“It should have been this is where we have redemption and this is not what to do in the biggest show post-pandemic.

“This is where Josh gets his redemption. That is what it was meant to be. I wanted to get the win so I could sleep at night,” said Warrington. 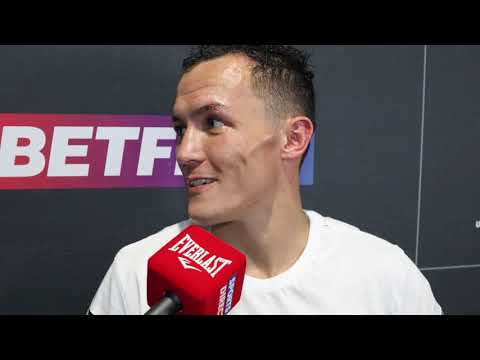