By Sean Jones: Canelo Alvarez has officially started his training for his November 6th undisputed clash with IBF 168-lb champion Caleb ‘Sweethands’ Plant and the Mexican superstar is looking powerful working on his body shots and vicious uppercuts.

Fresh off his knockout victory over WBO super middleweight champion Billy Joe Saunders last May, Canelo will be looking to break down Plant in the same way.

The Tennessee native Plant is basically Saunders 2.0 in terms of his slick boxing skills, and his emphasis on his technical game rather than power.

If Plant is able to avoid getting touched up by Canelo the way Saunders did, he’s got a chance of winning the fight. But for Saunders to do that, he can’t gas out.

Saunders emptied his tank after six rounds, and Canelo swooped in and crushed his right orbital bone with a lethal left uppercut in the eighth.

Canelo is slowing down

One thing that is hard to ignore is Canelo’s diminishing hand speed and his ability to throw combinations like he once did when he was younger. 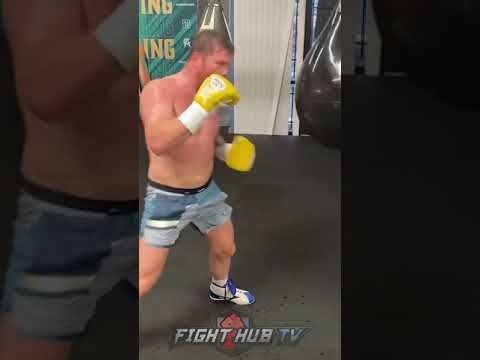 It’s clear from watching Canelo’s workout on Wednesday, as well as his recent fights, his hand speed is decreasing as he ages.

Hence, we’re seeing fewer punches thrown per round by Canelo, and him putting more of an emphasis on his power game to win fights. Canelo can’t match the high work rate of Plant and most of his opponents nowadays, so his focus is on loading up on his shots to score knockouts and/or win rounds.

If you look at Plant’s recent bag workout, he’s a lot faster, and he’s throwing speedy combinations in a machinegun fashion. Those are the type of shots that Canelo can’t throw anymore due to his increasing age, loss of hand speed, and all the muscle that’s packed on in the last four years.

Canelo is at least 20 lbs heavier than he was in 2016 when he was still campaigning in the 154-lb division. Like anyone that puts on that kind of massive in a short period, their speed is the first thing to go.

Secondly, their work rate will drop off with it to the point where they’re throwing just a small handful of punches per round like we’re seeing with Canelo now.

Fortunately for Canelo, he’s highly popular, so he can get away with landing just a trickle of punches each round and still win the round.

It probably won’t matter if Plant outlands Canelo 6 to 1 in each round, the Mexican star will still likely win the round if he can land 2 to 3 hard power shots to impress the judges.

Plant, 28, has added Andre Ward to his team as an advisor to give him tips on how to dissect Canelo slowly on November 6th.

While Ward never fought Canelo or anyone like him during his professional career, he likely has some good ideas on what ‘Sweethands’ Plant needs to do for him to have his hand raised at the end.