By Dan Ambrose: Caleb Plant was amused that Canelo Alvarez chose to label him as “insecure” after the two met for their initial press conference for their November 6th fight at the MGM Grand in Las Vegas.

Canelo’s reasons for why he thinks IBF super middleweight champion Plant (21-0, 12 KOs) is insecure is because he was talking so much trash about him, his trainer, and looking unconfident.

Plant feels that Canelo (56-1-2, 38 KOs) needs to look at himself, as already showing the hallmark signs of an insecure person with him testing positive for the banned PED clenbuterol.

Taking banned performance-enhancing substances to increase your strength, stamina or to help you making weight comes from being insecure, says Plant.

If you’re a secure fighter and believe in yourself, you don’t need to take PEDs to help you measure up. Plant points out that Canelo and Oscar Valdez both tested positive for performance-enhancing drugs.

Canelo was given a six-month suspension several years ago, whereas Valdez got off without being penalized.

Plant explains WHY Canelo is insecure

“They’re not accusations,” said Plant about him labeling Canelo a drug cheat. “He went to trial and got suspended for six months.

“He may be upset with me, but there’s no need to be concerned with me. He should be upset with himself. There’s nothing I’ve done.

“These aren’t my rules or my standards. These are the rules by VADA, WADA, or whoever you used and signed up for, and you didn’t follow the rules.

“That’s not on me; that’s on you. So is taking illegal substances, is that insecurity? What about that?

“That stems from fear. Whether it’s fear of not being able to make weight or not having enough stamina or not being strong enough, or whatever the situation may be. That’s insecurity.

Canelo maintains that his positive for clenbuterol was because he ate meat in Mexico tainted with the substance.

Whether the boxing public believes that excuse depends mainly on how much they like Canelo.

Diehard boxing fans of Canelo tend to believe that excuses, whereas non-fans view it as the Mexican star failing to take responsibility for testing positive for the banned substance.

You can argue that Plant is right about fighters that use PEDs. They’re taking them because they’re insecure about whether they’re good enough to beat certain fighters without the assistance of a drug.

At the root of a person taking PEDs is a feeling of insecurity. If they’re insecure about themselves, they’ll take PEDs to artificially put them at or beyond the perceived level of their competition.

It was probably a bad idea for Canelo to label Plant “insecure” because it allows him to throw the label back and give some good reasons why he believes the Mexican star has insecurity issues.

Plant on why he retaliated when pushed

“Just normal back and forth, ‘I’m going to win. I’m going to win,’ and it just went from there,” said Caleb Plant to on what was said between him and Canelo during their face-off.

“He got one on me, and I got one on him, but I had my glasses on, and they kind of went to my cheek and just left a scratch.

“He was saying that too,” said Plant about Canelo being upset with him, calling him a “mother f****.” Did you see where he was talking to Boo Boo Andrade a couple of months ago when he was saying, ‘Get out of here, mother f***.’

“Wasn’t he saying that? Now all of a sudden, those words mean something completely different? So come on, let’s unpackaged that. Let’s really talk about it if you want to talk about it.

“Now, all of a sudden, I’m talking about his momma? That doesn’t make any sense. Because it’s a fight, if he wants to turn it into a fight, then that’s what it is,” said Plant when asked why he threw a punch/slap after Canelo pushed him hard.

“I’m not no punk. I’m not going to just stand up there and do whatever you want to against me. Maybe the rest of the guys, you can come up here, and they’re scared of you. That’s not how this works,” said Plant.

Canelo did call Demetrius Andrade a “mother f***” last May when he called him out at the post-fight press conference. So the question is, why was it OK for Canelo to refer to Andrade as a “mother f***,” but not OK for Plant to use the same word towards him?

Did Canelo mean it literally when he used the MF word against Andrade or empty words to convey an underlying message that he wanted him to leave his post-fight press conference?

It’s pretty evident that Canelo’s valid rationale for physically attacking Plant had nothing to do with him calling him a “mother f***.”

The likely valid reason for Canelo attacked Plant was that he was trashing him by calling him a “drug cheat” repeatedly and mentioning his teammate Oscar Valdez turning up dirty and testing positive for a PED recently.

Canelo has never had one of his opponents outwardly repeatedly calling him a drug cheat during a press conference before, and I think it made him angry enough to shove and then punch Plant.

It’ll be interesting to see if Plant gets attacked again in the following press conference if he continues to call Canelo a drug cheat.

“No, no, no, there’s nothing that I need stitches for. My glasses pushed up against it, and it caused a scratch,” said Plant on the injury he suffered when Canelo punched him.

“I just didn’t want it trickling down, so I put a bandaid on it. I wasn’t sure what it was going to be,” said Plant when asked if he was prepared to be attacked during the press conference by Canelo,” said Plant.

It’s good that Plant doesn’t need stitches for his injury because that might have caused his fight with Canelo to be postponed to December or into 2022.

Now that we’ve seen that Canelo is willing to attack Plant during the press conferences when he’s angry, security will need to be in between these two in the following press conference.

If Plant starts calling Canelo a “drug cheat” repeatedly, it would be wrong if he gets slugged and scratched up. That label is what seems to have set Canelo’s kettle to a boiling, not the use of the words “mother f****,” which the Mexican star hurled at Demetrius Andrade last May. 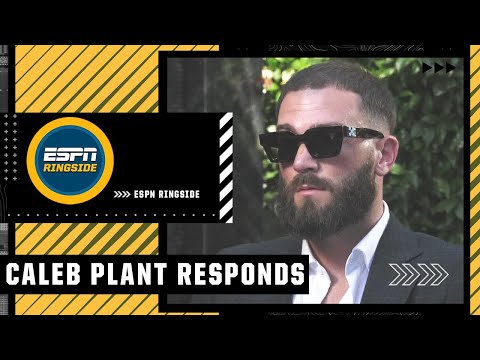