By Mark Eisner: Evander Holyfield was shockingly stopped in the first round by 44-year-old former MMA star Vitor Belfort on Saturday night in their highly anticipated eight-round fight on Triller pay-per-view at the Seminole Hard Rock Hotel & Casino in Hollywood, Florida.

Holyfield was upset after the fight at the referee for him quickly stopping the fight, as he says he wasn’t hurt and that he’d lost his balance after getting dropped.

The thing is, Holyfield’s balance was bad from the start of the fight, as he stumbled and fell after missing a punch.

Belfort knocked Holyfield down with a big left uppercut that put the former boxing star on the seat of his pants, looking slightly disoriented.

After Holyfield got back to his feet, Belfort rushed forward unloaded a ton of heavy shots, many of which landed in between the guard of Evander. Seeing Holyfield’s plight, the referee stepped in quickly and halted the fight with Evander still on his feet.

Belfort too fast & too powerful

Tonight, the 206-lb Belfort had too much speed, youth, and power for the 58-year-old former two-division world champion Holyfield.

Things looked bad early in the round when Belfort nailed Holyfield with a hard shot that caused him to lose his balance and stumble across the ring.

After Holyfield untangled himself from the ropes, Belfort had lost all fear of him, and he came forward and knocked him down with a hard left hand to the head. Belfort saw how shot Holyfield was, and he took advantage of it by going for the kill like a shark.

After the fight, Holyfield was asked if he wanted to continue fighting, and he said, “I’ll go in again with him, and I’ll show him.”

Obviously, there’s no chance whatsoever of Holyfield ever fighting Belfort again because Triller likely won’t be willing to pay for a rematch between the two.

The only fight that would make sense for Holyfield would be against Mike Tyson, but it’d doubtful that boxing fans would be eager to purchase the match on PPV, not after what happened tonight.

“The thing is, there wasn’t a  shot that hurt me real bad,” said Holyfield. “He was strong, and it was a shot that knocked me off balance. Then he went to close the show. No, I’m not hurt.

“It’s kind of sad. I think it was a bad call. The referee shouldn’t have stopped the fight that quick. The guy was strong, but when people have fast hands, I was trying to be on defense.

“Of course, I would,”  said Holyfield when asked if he’d like to fight Mike Tyson. “Me not being able to bounce back like I used to, I let him get too close.”

“100 percent,” said Belfort when asked if he’ll continue to box. “I want to thank Holyfield for stepping up.  As I said, I came to knock people out.  We got a list of opponents.

“Get ready, boxers. You have to come to my world. Here on Triller, we’re going to mix. We got to make this even. Champions, don’t be afraid of the weight division. Lose a pound, and let’s do it.

“He earned the respect, but he’s still a Disneyworld kid,” said Belfort in expressing interest in fighting Jake Paul. “We got twenty-five million dollars with the winner takes all! Let’s go! Jake Paul, stop running from me, man.

“I’m going to teach you a lesson. I’m going to make you my kid. You’re going to meet daddy over here on Triller. Stop running, you little b***.”

“You showed that MMA and boxing can be equal,” said Triller Fight Club CEO Ryan Kavanaugh to Belfort. “You also showed that 40 and 50 are the new 20 and 30.

“We want it on Thanksgiving day, the one-year anniversary. Thanksgiving Saturday. $30 million winner takes all. Jake says, ‘No,’ we know why,” said Kavanaugh in calling out Jake Paul for Belfort.

“AJ, you’ve got my respect, but I’m going to teach you and put you in my lap. You’re going to sit like a baby. You better start training. Listen, all your little fans are going to be Vitor Belfort fans. Do you know why? I got family. You don’t have a family. America needs me, not you,” said Belfort.

It’s a long shot that the Mexican superstar Canelo Alvarez will agree to fight the 44-year-old Belfort at 185. The highest weight Canelo has fought at is 175, and he would have to bulk up to meet Belfort at 185.

Moreover, the $30 million that Kavanaugh and Belfort are talking about wouldn’t be enough for Canelo, who is getting $40 million to face IBF super middleweight champion Caleb Plant on November 6th.

For Canelo to consider a fight with Belfort, they would need to bump his pay to what he’s getting for the Plant fight.

“I want to thank everybody,” said Donald Trump. “You are a great patriot. Congratulations. Vitor, your stock was very high, but it’s even higher tonight because you beat someone that was one of the greatest of all time; there’s no question about it.

“We love Evander, and I’ve never seen that happen to Evander. I’ve been with Evander a long time. It’s one of those things, but Evander, we love you. We love you; you’re a special man. And we love Florida. This has been an incredible success. I hear it’s going crazy on the Internet. Fantastic evening, champ,” said Trump. 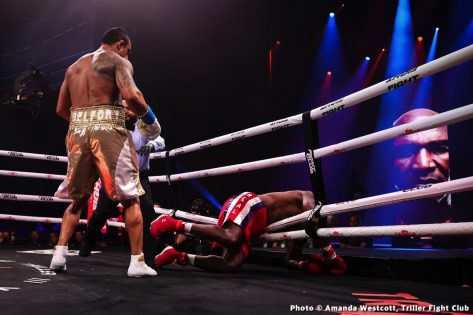 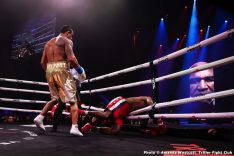 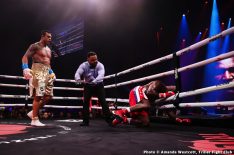 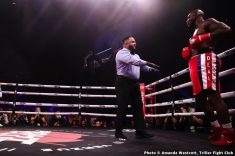 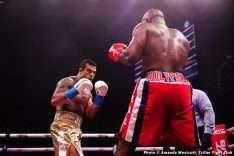 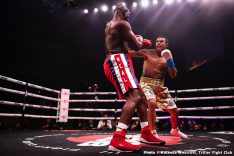 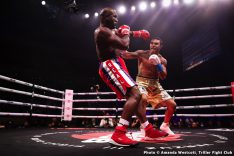 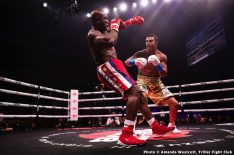 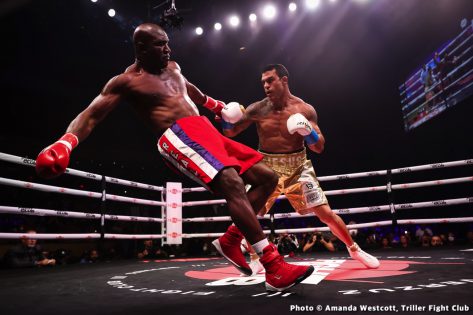 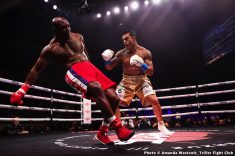 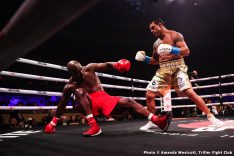 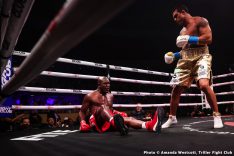 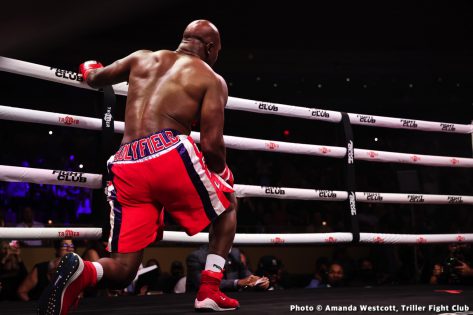 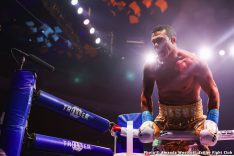 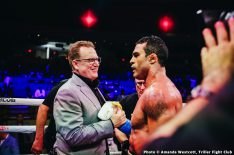 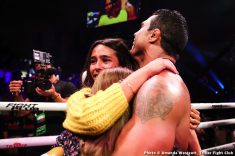 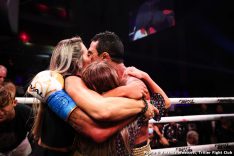 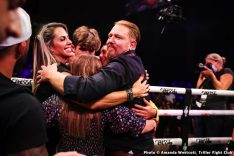 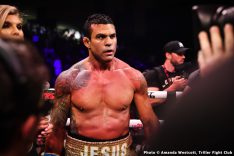 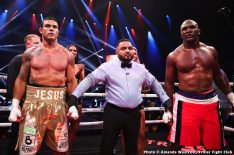 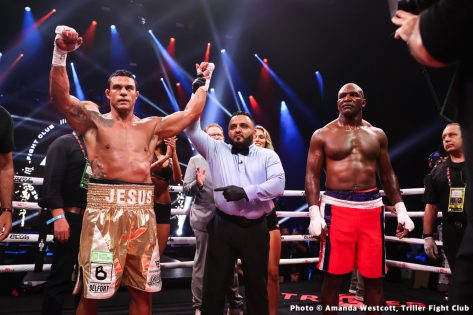 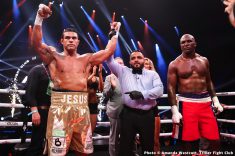 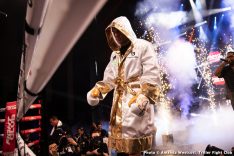 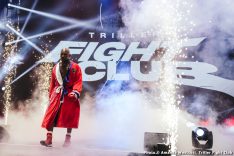 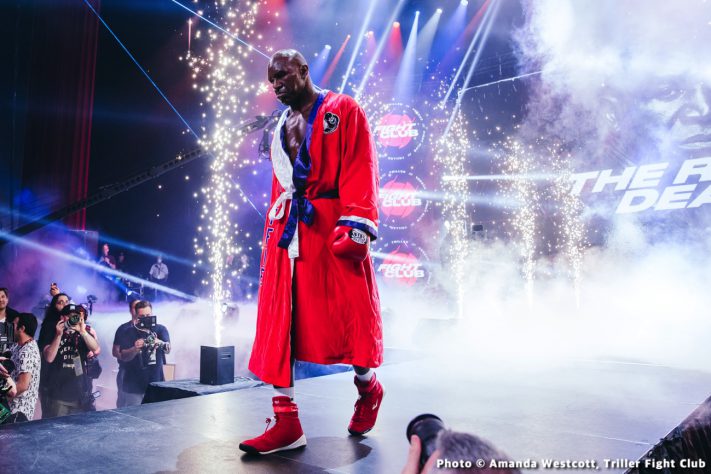 David Haye: I’ll only come back for Tyson Fury fight »