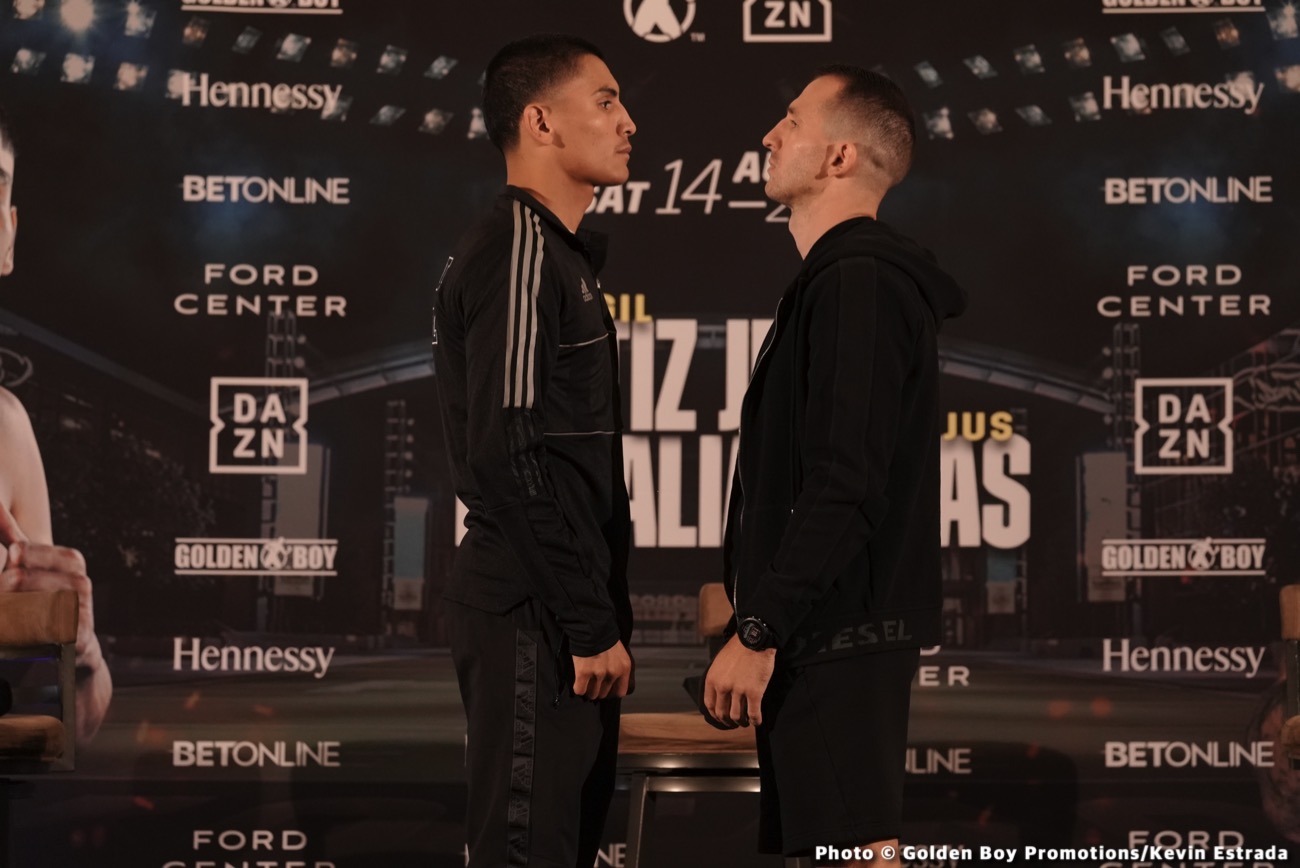 By Allan Fox: Unbeaten, highly ranked welterweight contender Vergil Ortiz Jr has the perfect opponent on Saturday night in facing former world title challenger Egidijus Kavaliauskas, who can match him in the power department when the two battle in their main event on DAZN. The start time for the Ortiz Jr vs. Kavaliauskas event is 8:00 p.m. ET.

#1 WBO Ortiz Jr (17-0, 17 KOs) will be getting a trial run for a title shot against WBO welterweight champion Terence Crawford in 2022 when he goes up against Kavaliauskas (22-1, 18 KOs) at The Ford Center at The Star in Frisco, Texas.

Ortiz Jr cannot let Kavaliauaskas land with the same frequency as Hooker was because he’s too heavy-handed for him to take that kind of consistent punishment.

According to Vergil Jr, he was only 70% for the Hooker fight because he was recovering from COVID-19. As such, Vergil Jr should be a lot better tonight with him 100%, but we’ll see if that’s the case.

Ortiz Jr will be facing a legitimate welterweight tonight in ‘Mean Machine’ Kavaliauskas, not a pumped-up 140-pounder in Hooker. That means the power will be different for Ortiz, and he’s going to have to put a little more emphasis on defending better.

“I think from sparring both and seeing both in action, I think Vergil has the edge,” said Mikey Garcia to Fighthype on tonight’s Ortiz vs. Kavaliauskas match. “I think it’ll be a good fight, but I think Vergil wins.

“Honestly, I think Vergil stops him,” Mikey continued. “He’s got plenty of power, and he’s in his prime. He’s hitting that prime and showing that in every single fight. I think he’s going to stop him [‘Mean Machine’ Kavaliauskas]. I think it’ll be a good fight.

“Egidijus is a good fighter too, and he’s a solid, strong guy too, but I think Vergil has the edge,” said Mikey, 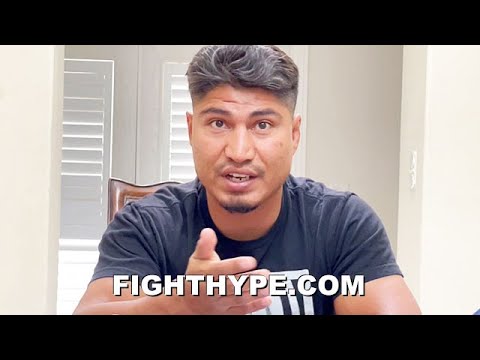 Vergil Jr can stop Kavaliauskas if he jumps on him as Terence Crawford did in the ninth round of their fight in December 2019.

Crawford took dropped ‘Mean Machine’ in the seventh and ninth rounds with his combination punching.  Interestingly, Terence couldn’t hurt Kavaliauskas with his single punches, as he didn’t have enough power.

But when Crawford started flurrying on him with sustained shots, he was able to hurt Kavaliauskas, who was covering up during those barrages instead of looking to counter in between.

Crawford was there to be encountered during those flurries, but Kavaliauskas doesn’t throw counters. That’s what gave Crawford the confidence to unload on him.

It would have been a much harder fight for Crawford if he had to worry about being countered when he would throw his shots, as it would have changed the pace of the contest.

Ortiz Jr to be compared to Crawford

“It is the perfect fight; it is the right fight for Vergil,” said trainer Robert Garcia to K.O Artists Sports on Ortiz Jr, taking on Kavaliauskas.

“Crawford is pound-for-pound one of the best fighters in the world, and he’s a three-division champion. He’s got so much experience. The difference is, Crawford already did it as a champion, a three-time world champion.

“Vergil is doing it in his 18th professional fight and has never fought for a world title yet, and he’s still not a world champion. So the experience level is totally different.

“He’s been many, many more times in multiple divisions like I told you. That’s not what we’re looking for. We want Vergil to have a great performance.

“He’s had a great training camp. I think this is one of his best training camps so far. He had great sparring partners, and he’s been looking very, very good in sparring,” said Robert Garcia about Vergil.

It will be a big plus if Vergil can get through the fight tonight against Kavaliauskas without getting dropped and hurt the way Crawford was in his fight against him in 2o19.

Crawford wasn’t dealing with ‘Mean Machine’ Kavaliauaskas’ power well early on in the fight. It wasn’t until he started switching things up in the second half that he took control.

Vergil Ortiz Jr vs. Egidijus Kavaliauskas – How to watch?

Boxing fans can watch Ortiz Jr vs. Kavaliaskas live on DAZN tonight. The start time is 8:00 p.m. ET / 5:00 p.m. PT. The location of the fight is at The Ford Center at The Star in Frisco, Texas.

“So, I think he can do it before the ninth round,” said Robert Garcia in predicting a 9th round stoppage for Vergil Ortiz Jr over Kavaliauskas. 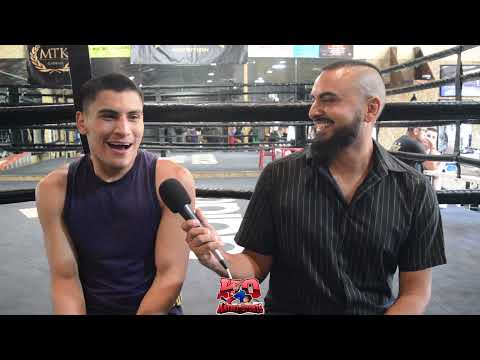 “Will that do it for the boxing world, that this kid did it before Crawford? I really don’t care. I think little by little, the kid [Vergil Ortiz Jr] is going to be ready for any world champion, and I think he can beat any world champion.

“Does he do it earlier or faster or better than Crawford? I don’t know, but I know he’ll be ready.

“When talking to promoters and managers, they always prefer fighters to go rounds obviously for the experience. We see it this way.

“The experience in the gym, that’s a lot of experience already that you can catch in the gym and not necessarily have to be because you’re getting rounds in a fight.

Vergil Jr can get Kavaliauskas out of there earlier than Terence Crawford did if he opens up with a barrage of punches the way he did to stop him.

Kavaliauskas has a bad habit of covering up when his opposition unloads on him, and we saw that in his last fight against Mikael Zewski and his previous one against Crawford. He hasn’t improved.

Instead of ‘Mean Machine’ Kavaliauskas punching with his opponents and looking to counter, he covers up and waits for them to stop throwing before he opens up with his shots.

Unfortunately, you can’t win at the highest levels fighting with that kind of style, and if Kavaliauskas does that tonight, Vergil Jr will surely stop him.

“I personally would have loved another opponent,” said Garcia about him wishing Vergil wasn’t fighting Kavaliauskas. 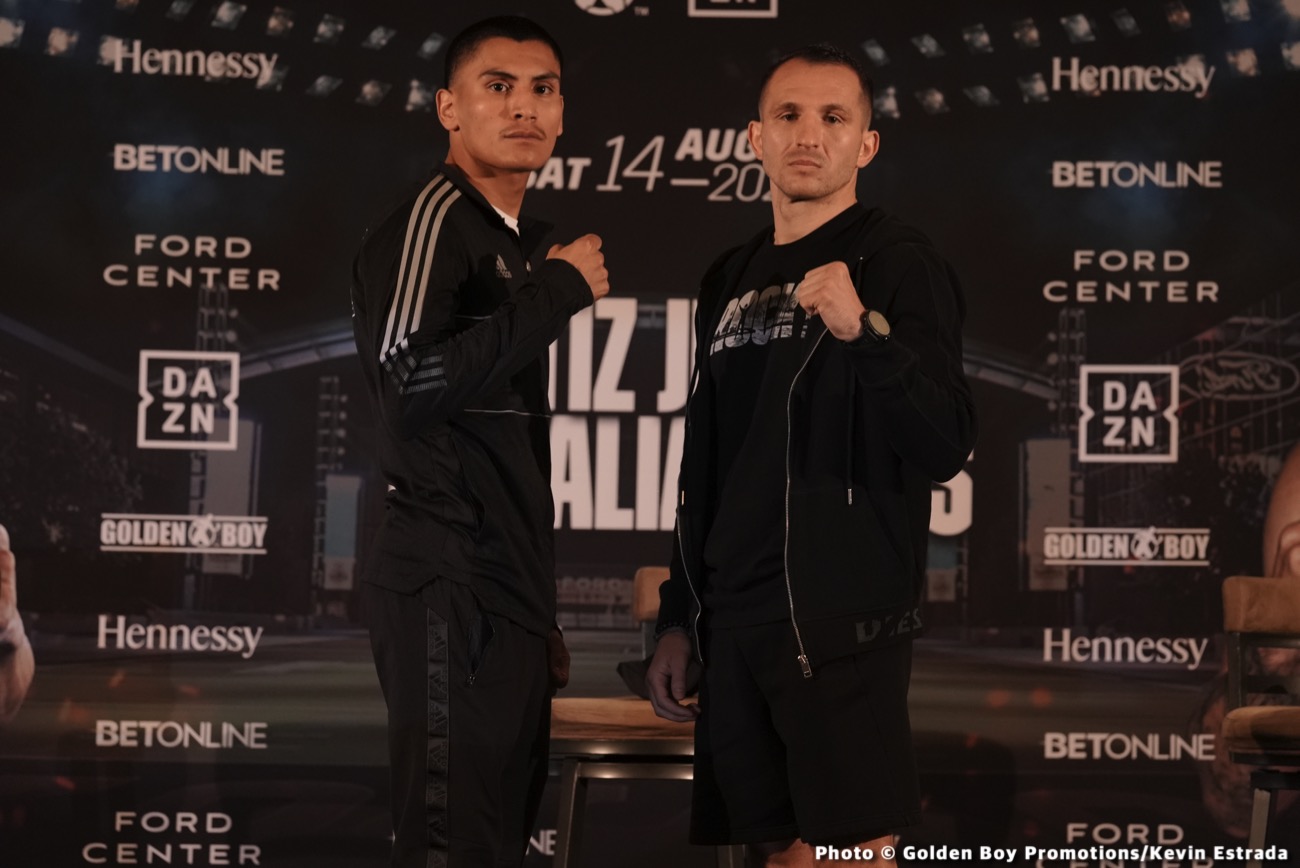 “The only reason is I know Egis really well; I used to train him. So it sucks that we have to go against each other, but it’s a business, and it is a sport.

“We had a good talk before we even agreed to the fight.  But we agreed that it’s the right fight for the fans, for TV, and for boxing. So I think it’s the perfect fight for Vergil, and it is a real test.

“Mean Machine had some really good rounds with Crawford. Even though they didn’t count it as a knockdown, I do believe that it should have been a knockdown, but Vergil is ready. He’ll be ready to go out and perform and give the fans a great fight.

“Not because he knows Vergil because he’s never been around Vergil in the gym, but because he wants to go out and beat his former trainer.

For him, it’s a lot more motivation, and it’s a big motivation for them [Team Kavaliauskas].

“They’re going to be the underdogs, and they want to prove everybody wrong. It’s going to be one of those fights that are very competitive,” said Robert Garcia.

Trainer Garcia has got to have mixed emotions in watching Vergil Jr take on his former fighter Kavaliauskas tonight, as it’s one of those types of fights where it’s almost like watching two family members battling it out.

Although it’s a sport, it’s difficult for trainers like Robert to see it entirely that way.  But Vergil Jr has got to win tonight to take his career to the next level, which is a tough test.

Kavaliauskas, 33, is a huge puncher, and he’s coming off an impressive eighth round stoppage victory over Mikael Zewski last September.

Obviously, that was eleven months ago, and there’s likely to be some ring rust on Kavaliauskas from all the time he’s had outside of the ring.

Ortiz Jr is one of the best young prospects in the welterweight division, and he’s got world champion written all over him. However, Kavaliauskas could ruin all that if he defeats Vergil, which would be a huge letdown for his training team and promoters at Golden Boy Promotions.

Kavaliauskas has the kind of power that could end the fight early if he’s able to catch Ortiz Jr with one of his big shots. In Vergil’s last fight against Maurice Hooker, he was getting nailed cleanly the entire contest and taking a lot of punishment.

Kavaliauskas hits harder than Hooker, and he could score a knockout of the 23-year-old Vergil Jr if he’s able to land with the same regularity.

At this point, Ortiz Jr likely won’t change the way he fights Kavaliauskas to how he did in his previous fights against Hooker and Antonio Orozco. This is how Ortiz fights, and he’s going to stick with that style until someone proves him wrong.

Vergil Jr will stop Kavaliauskas by the eighth round tonight. It’ll be a little bit earlier than Crawford, but not enough to where boxing fans will be able to say that he did a better job.

You can expect Vergil to get hit a lot in this fight because he’s less defensively sound than Crawford, and he’s got going to get marked up badly.