By Jim Maltzman: A very thin-looking Vergil Ortiz Jr weighed in at the welterweight limit at 147 pounds on Friday for the defense of his WBO International welterweight title against former world title challenger Egidijus ‘Mean Machine’ Kavaliauskas this Saturday night, August 14th, at The Ford Center at The Star in Frisco, Texas and LIVE on DAZN.

Vergil Jr vs. Kavaliauskas will be headlining live on DAZN this Saturday night. This is a big test for Ortiz Jr to show whether he’s ready to challenge for a world title against WBO welterweight champion Terence ‘Bud’ Crawford in 2022.

If Vergil looks impressive in beating Kavaliauskas, he’ll be deemed ready to take on Crawford, who will be turning 34 next month on September 28th.

Ortiz, 23, looked very thin at the weight, and it’s obvious that he went through a lot to get down to the 147-lb limit. As emaciated as Vergil Jr looked, it’ll be interesting to see if he’s sluggish during the fight. 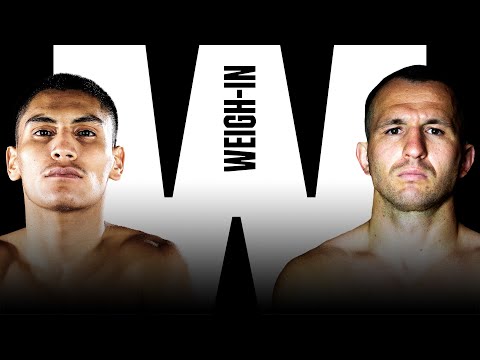 The Golden Boy promoted Ortiz Jr. looks like he’s not going to be able to continue fighting at 147 for too much longer before he’s forced to move up to 154.

This is the first big puncher that Vergil Jr will have faced in his still young four-year professional career, and we’ll see if he can take the power from ‘Mean Machine’ Kavaliauskas without getting hurt and dropped as Crawford did in their fight in December 2019.

Vergil Jr will have to put a little more emphasis on his defense against ‘Mean Machine’ because this is a guy that hits too hard for him to be just walking through his shots as he did against Maurice Hooker.

“He believes a lot in his power, as he should. He looks to be a strong kid,” said Shawn Porter on his Porter Way Podcast in talking about Vergil Ortiz Jr. “He’s [Kavaliauskas] going to push Vergil.

The heavy-handed 33-year-old Kavaliauskas hits too hard for Ortiz Jr to risk leaving him out there for too long, and he cannot let him land the way he did against Hooker.

Vergil was hit way too often by Maurice Hooker last March before stopping the former WBO 140-lb champion in the seventh round.

“He’s still relatively young [23-years-old] that defense is going to matter because there are guys that are going to be able to take your power, and they’re going to wear you down,” said Porter. “It’ll catch on.

“Maybe even in this fight. He’s a solid boxer and a good body-puncher too. He’s got some thump. I like everything about Vergil Ortiz; I really do.

“That was a surprise, and I tell people this all the time. I’m not really invested in who wins a fight, but when it’s Terence, when it’s Deontay Wilder and when it’s Boo Boo, Daniel Jacobs.

“There are a couple of guys out there,” said Porter about the tough time Terence Crawford had against Egidijus Kavaliauskas.

“When Crawford fought the ‘Mean Machine,’ it was relatively close, but I felt that Terence was making the fight hard. ‘What is he doing, what is he doing?’


« Muhammad Ali & Billy Crystal Partner the “The Times of Israel!”