By Chris Williams: Guillermo Rigondeaux (20-1, 13 KOs) and John Riel Casimero (30-4, 21 KOs) both successfully weighed in on Friday for their fight this Saturday night on August 14th on Showtime. The fight is taking place at the Dignity Health Sports Park in Carson, California.

The winner of the Rigondeaux vs. Casimero fight will likely take on IBF/WBA champion Naoya ‘Monster’ Inoue or WBC champ Nonito Donaire next.

Rigondeaux weighed in at 117.5 lbs while WBO bantamweight champion Casimero scaled in at the limit at 118 lbs. Casimero’s WBO 118-lb title will be on the line, but not Rigondeaux’s WBA secondary bantamweight strap, which is expected to be stripped from him.

Rigondeaux told Casimero to take his sunglasses off during the face-off because he wanted to look him in the eyes the way normal face-offs are conducted.

Showing his good manners, Casimermo then took his sunglasses off and handed them over to Rigondeaux, who then put them on to indicate that he was the boss.

Afterward, Rigondeaux attempted to give them back to Casimero, but he wouldn’t accept them. It’s as if he had given Rigondeaux a gift, and he didn’t want to take it back. Needless to say, it was an odd exchange between the two. 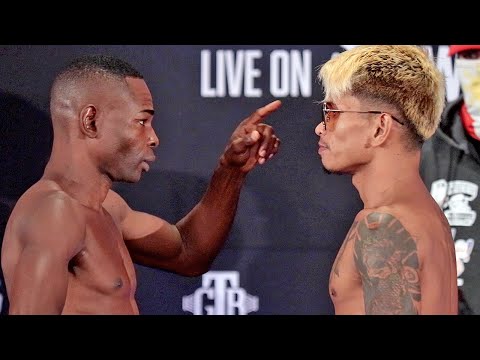 Before today’s weigh-in, Rigondeaux had been getting annoyed with Casimero’s decision to wear sunglasses during the press conferences.

On Thursday, Rigondeaux pointed to Casimero’s glasses to get him to take them off, but he wouldn’t do it. Perhaps he wasn’t comfortable looking at the into the intimidating stare from ‘The Jackal.’

Just going by the exchanges between the two fighters, Rigondeaux appears to be dominating the sheepish-looking Casimero, who looks like he’s afraid of the two-time Olympic gold medalist.

You have to wonder if that fear will carry over into the fight, causing Casimero to fight at a lower level than what he’s done in the past.

Although Casimero has been talking about having a secret game plan put together by his trainer, all fighters have gameplans when they face Rigondeaux.

It’s important that Casimero fight in a more controlled manner than what he’s been displaying throughout his career. Casimero got a Ricardo Mayorga wildman style of fighting that leaves him open to getting picked apart by boxers.

That style of fighting works against lesser fighters, but it’s failed Casimero when he’s gone up against pure boxers like Jonas Sultan and Amnat Ruenroeng

Only once in Rigondeaux’s career has a game plan worked against him. He moved up three weight divisions to challenge then WBO super featherweight champion Vasily Lomachenko in December 2017.

That fight ended after Rigondeaux suffered an arm injury in the sixth round. We don’t know if Lomachenko would have won had it gone the distance, but he likely would have.

He had such a huge weight advantage over Rigondeaux that it wasn’t even a fair fight. Anytime a fighter goes up three weight classes without getting acclimated to the division slowly, they’re asking for trouble.

Other weights on the Rigondeaux vs. Casimero card: