Unbeaten rising welterweight Eimantas Stanionis (13-0, 9 KOs) and former world champion Luis Collazo (39-8, 20 KOs) fought to a no-decision after an accidental headbutt injured Collazo in the fourth round, leading to the referee calling off the bout that headlined FOX PBC Fight Night and on FOX Deportes Saturday night from the Armory in Minneapolis.

The battle between the highly-regarded prospect and tough veteran contender delivered early, as Stanionis and Collazo fought at a close range and exchanged consistent power punches. Stanionis appeared to get the better of the early action, out landing Collazo 104 to 50 while connecting on over 52% of his total shots, according to CompuBox. 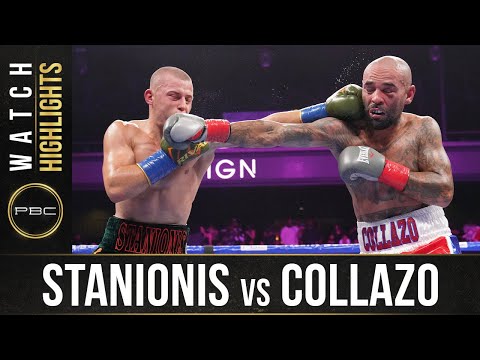 “He was coming into me, and I wanted to show that I’m strong too, and I could fight him off,” said Stanionis. “It didn’t feel like a big collision, but it must have been worse for him.”

In the fourth round, which was again fought at a close distance, late action saw an accidental headbutt stun Collazo and put him on the canvas in obvious and immediate pain. While he took his time and attempted to gather himself, referee Charlie Fitch was forced to wave off the bout at the suggestion of the ringside physician, resulting in the no-decision 2:31 into the round.

“It’s disappointing, of course,” said Stanionis. “He’s a tough fighter, and he’s a warrior, so, unfortunately, it had to be like this. I was just getting started. I knew he was going to come forward like that and that the headbutts would be a factor. It is what it is.

“I feel great physically. I want to get back in the ring as soon as possible. Collazo always brings a great fight, so I knew it would be a lot of action. He’s tested a lot of young prospects and taken them into deep waters. I wanted to entertain people and give the fans a great fight.”

“Coming into the fight, we knew that we could test him,” said Collazo, who reiterated his pre-fight statements that this would be his last fight. “We were both coming in at the same time, and that led to the clash of heads. It happens a lot. I love this sport, and I still have a passion for it, but it’s getting frustrating. I’m blessed to have the career that I’ve had. It’s on to the next chapter of my life.”

Maestre recovered from an early knockdown in round two that Fox scored with a blistering counter left hand that Maestre never saw coming. 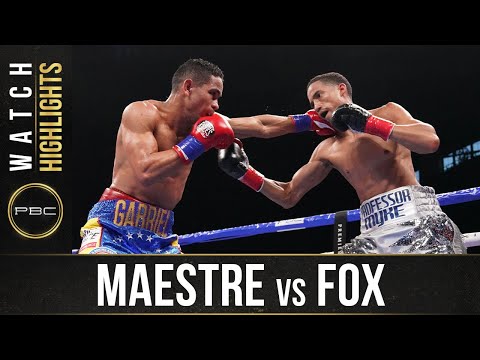 “When I was knocked down, I didn’t see the punch coming,” said Maestre. “He didn’t really hurt me, though, so it was no problem to get up and keep going.”

The unbeaten Maestre was able to work his way back into the fight through the middle rounds with consistent activity as he chased the elusive Fox around the ring. The aggression led to a 119 to 108 advantage for Maestre in power punches landed, despite Fox holding an overall edge in punches landed with 157 to 131.

“The strategy was just to keep fighting him for 12 rounds,” said Maestre. “I just wanted to stay close to him and make sure I kept throwing punches. Fox definitely surprised me. He was a very good boxer. I think the key was that I was throwing multiple punches and combinations. That was the strategy from start to finish.”

Fox appeared to turn the tide in the later rounds, pot-shotting Maestre effectively as he continued to circle the ring while holding smartly to slow any offensive momentum his opponent gained.

“I was stunned by the decision,” said Fox. “There’s no way he won more rounds than me. I knocked him down. I hurt him. I don’t know what else I was supposed to do. I don’t know what the judges were looking at. Look at his face and tell me he won that fight.”

“Fox fought very well, and he deserves a rematch,” said Maestre. “It was a very close fight. If my team says that’s what they want; I’ll be ready to fight him again.”

“I want to thank Devon for giving me this opportunity,” said Santamaria. “He’s a great fighter. I got the opportunity, and I showed up again.”

The younger fighter, Santamaria, was able to control the bout with his legs and landed more impactful shots over the 10-rounds, including moments where he appeared to stagger the southpaw Alexander with counter-left hooks in rounds one and nine. 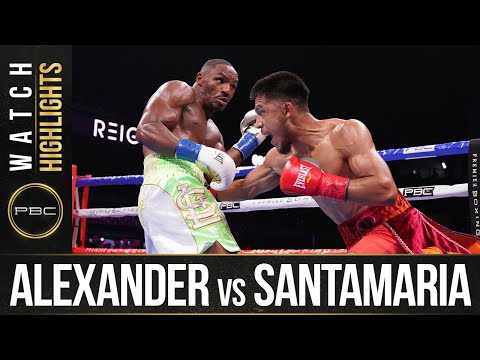 “My legs were the key for me, he was trying to catch me with the left, and I was able to anticipate it,” said Santamaria. “I was too quick on my feet for him. My footwork was the key. I’m ready to keep stepping up the competition.”

Those impactful shots made the difference as the two fighters each landed 82 punches throughout the fight. While Alexander had the 28-13 edge in jabs connected, Santamaria landed 69 power punches to 54 from Alexander. After the fight, Alexander revealed that a right bicep injury inhibited his land effectively in the first round. After 10 rounds, the judges saw the fight by scores of 98-92 twice and 97-93.

“I hurt my right bicep in the first round, and it really held me back from getting my offense going,” said Alexander. “I tried to shake it out as the fight went on, but I couldn’t get anything going. I’m disappointed.”