Michael Bisping has advice for Errol Spence after eye injury

By Allan Fox: Former UFC middleweight champion Michael Bisping has advice for Errol Spence Jr. following him pulling out of his August 21st mega-fight against Manny Pacquiao being of an eye injury.

Bisping says IBF/WBC welterweight champion Spence must follow his doctor’s advice “100%” for him to make a full recovery.

This isn’t an injury for Spence to take lightly, as it could end his career if he rushes back too soon to return to action.

According to Bisping, who suffered an eye injury against Kelvin Gastelum in 2017, he “pushed it” by trying to come back too soon from his surgery and lost vision entirely in the eye.

He has to listen to the doctors 100 percent for a full recovery. I pushed too hard to soon and lost the vision completely. https://t.co/NSEqCrQ9sW

Errol Spence Jr won’t be fighting Manny Pacquiao, and he won’t be fighting him at all. IBF/WBC welterweight champion Spence (27-0, 21 KOs) pulled out of the fight after suffering a left eye retinal tear in training last Monday.

WBA welterweight champion Yordenis Ugas will take his place against Pacquiao (62-7-2, 39 KOs) on August 21st at the T-Mobile Arena in Las Vegas, Nevada.

This is what Spence had to say:

“I’m very disappointed that I won’t be able to fight Manny Pacquiao. I was excited about the fight. Unfortunately, the doctors round a tear in my left eye and said I needed surgery on it ASAP. [The doctors said] That there was no way I could fight with my eye in that condition.”

The good news for boxing fans is that ‘The Truth’ Spence is expected to make a full return to the ring, provided he follows his doctor’s advice 100%, as Bisping points out.

For the time being, WBA welterweight champion Ugas (26-4, 12 KOs) is being moved up in the card, which he had previously been scheduled to fight in the co-feature slot, to face Pacquiao. 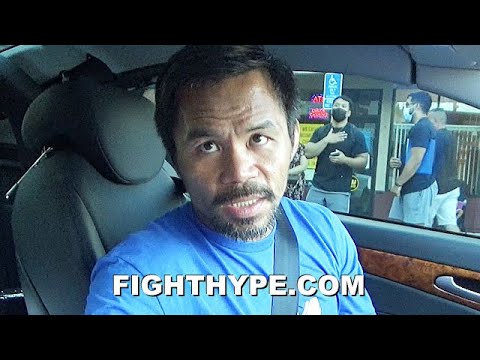 Ugas was originally scheduled to defend against Fabian Maidana, but he suffered the same injury as Spence did on the same day earlier this week on Monday during sparring.

What are the odds of something like that happening? It’s astronomical, and yet it happened.

It’s a miracle for Ugas, as he’s now about to make millions for his fight with Pacquiao and set himself up for life regardless of what happens on the night. This is literally a situation in which Ugas won the lottery.

Pacquiao now has the opportunity to earn back his WBA welterweight title, which he captured in his last fight then-unbeaten Keith ‘One Time’ Thurman in July 2o19.

The World Boxing Association recently stripped Pacquiao of his WBA title for inactivity, as he hadn’t defended it in the two years that he had held it. Pacquiao wasn’t too pleased with being stripped, but you could understand the move from the WBA’s perspective.

When you’ve got a champion who doesn’t defend his title for TWO solid years, you have to do something to keep the belt in play. Letting a champion sit on the belt and keep it around the house as if it’s an heirloom or a keepsake, it’s not good for the sport.

“History will tell you, you never ever want to underestimate the last-minute replacement,” said Pacquiao’s strength & conditioning coach Justin Fortune to Little Giant Boxing in reacting to Spence pulling out of the fight due to his left eye injury.

“A lot of champions have been upset by last-minute replacements,” Fortune continued. “So we’re taking the guy [Ugas] seriously. We’ll take everyone seriously.

“He [Yordenis] was getting ready for a fight anyway [against Fabian Maidana], so he’s in shape. It’s a whole different ballgame. There is nothing you can do. It’s a detached retina, and Vegas picked it up. They’re very, very good at their job.

“Had he [Spence] fought Manny, it would have been more damaging and stuff. Manny doesn’t want to do that. Spence is a good guy. There’s no malice there. You don’t want to hurt the guy. I hope he gets it taken care of and gets back in the ring as soon as he can.

“You don’t wish anyone any kind of harm. He’s [Pacquiao] disappointed as well. He trained hard, and he needed this fight as we all did. I have no idea, mate,” said Fortune when asked if the Pacquiao vs. Spence fight can be rescheduled for December.

“That would all go through the doctors and s*** like that. We’ll see what happens,” said Fortune on whether Pacquiao can fight Spence later this year. Lookout,” said Fortune in sending a message to Yordenis Ugas.

Pacquiao can’t afford to take Ugas lightly, as this is a fighter that gave Shawn Porter massive problems two years ago in losing a questionable 12 round decision to him. Some fans believe Ugas did a better job against Porter than Spence did, but he didn’t get the nod by the judges.