John Fury: Tyson will knock out Wilder within 5 rounds

John says he views Wilder as a bump in the road they got to deal with for Fury to get to the fight he wants against IBF/WBA/WBO heavyweight champion Anthony Joshua.

The concern that John has for Fury is the mental aspect of the game. He’s got his mind on his family right now, and that obviously comes first.

Once he does get dialed in for training in the U.S, he’s going to have to stay focused. John feels that Fury is surrounded by ‘yes-men’ in the U.S, who are blowing smoke up his backside, smothering him with compliments instead of telling him what he needs to know to keep improving.

Deontay Wilder is still the most dangerous heavyweight

“He’ll be the fighting monster again,” said John Fury about Tyson to BT Sport Boxing. “I don’t care if he fights Wilder next or ever again. The timing has got to be right.

“The only problem is inactivity. If Tyson was active, he could have fought Anthony Joshua and Deontay Wilder on the same night. But circumstances, the world, COVID-19, stuff like that.

“We got to go when we’re ready and not before. If you go to America half-cocked, then your belt stays there. That’s the truth because I’m a realist.

“If you don’t do it right, your belt stays in America. I know he [Fury] flattened him [Wilder] last time; he busted him last time, but let me tell you, without preparation, something can go wrong.

“Deontay Wilder is still the most dangerous heavyweight out there. You’ve got to give him his respect.

“I hate him as a man. He’s not a man, in fact. He’s a piece of rubbish, but that piece of rubbish can fight, and he can punch. So we got to get it right. If it was down to me, it will be right,” said Fury.

Wilder is going to be very dangerous for Fury in the trilogy match, especially because of what happened last time they fought.

Deontay feels that Fury cheated, and he wants to make him pay by thrashing him.

“I think if he’s [Fury] on his A-game, we tick on the boxes, it’ll be over within five rounds,” John said in predicting Tyson will knock out Deontay faster in the trilogy match on October 9th. 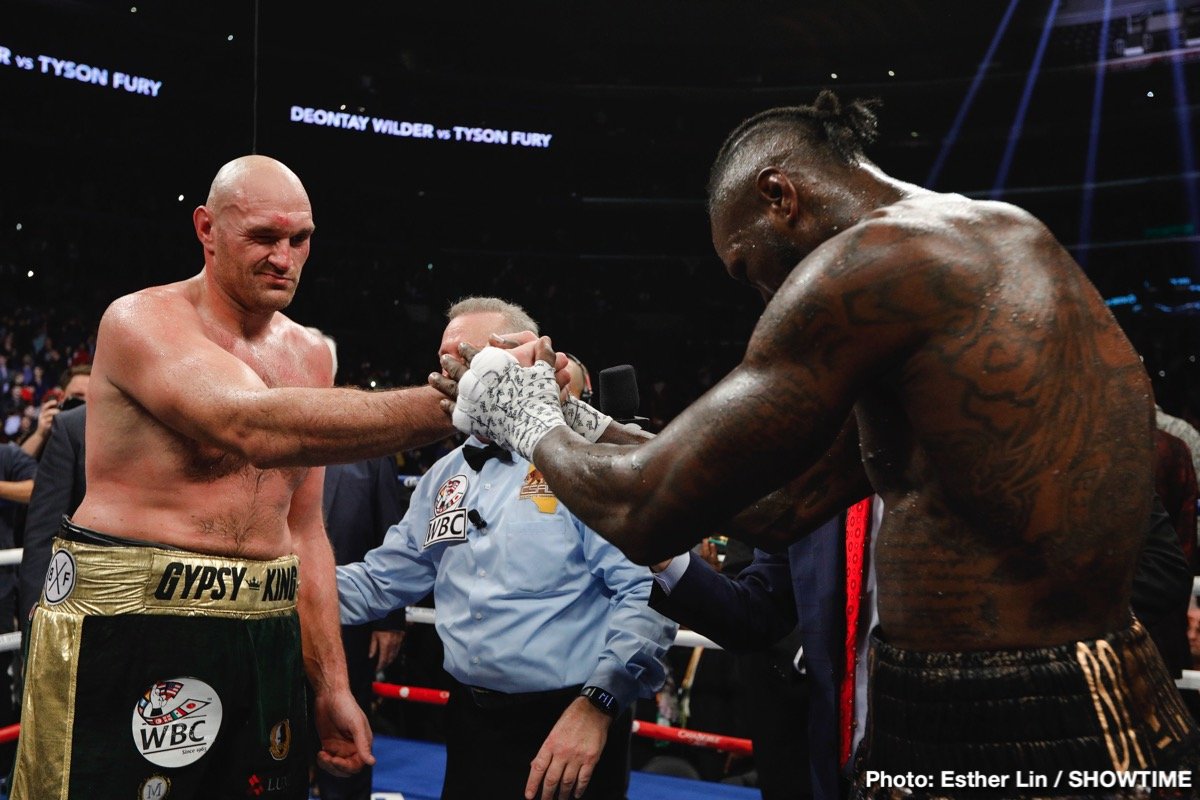 “It’ll be a quicker job than it was last time. AJ, we should get him straight after. I’m not interested in anything. I wasn’t even interested in Wilder.

“I’m still not interested in Wilder, but he’s cropped up, he’s a bump in the road, and we got to get through him.

“He’s not going to go away because the powers that be in America said he’s entitled to a third fight, which is absolutely rubbish. It’s all mind games and politics again,” Fury said.

If Fury goes after Wilder like a freight train, he could run into something and get poleaxed on October 9th.

Fury might not be so lucky if there’s a ready that isn’t willing to give a count while he’s unconscious like we saw in the first fight. There aren’t too many referees in the sport that give counts to an unconscious fighter. You don’t see that.

John wants Fury to get back on AJ trail

“So what we do is get him bumped off, and we’re on the AJ trail again,” said John Fury. 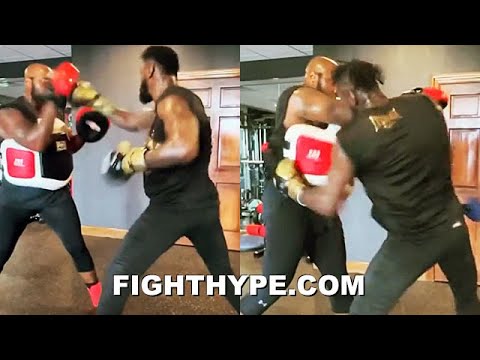 “The Anthony Joshua trail, and we’re not going to come off until we got him. But he’s got a sticky wicket to do [with Oleksandr Usyk].

That’s not a foregone conclusion. You know, I tip AJ, he’s big, he’s strong, and he’s got a good boxing array.

Besides Tyson, he’s the second-best heavyweight in the world, I think. It would be a toss-up between him [Joshua] and Wilder because if Wilder landed on him, it would be good night for him.

He wouldn’t recover. But he’s [Joshua] the one with the best, so you got to say, he’s second-best.

That’s the fight I’m looking at. We just got to get rid of this American problem [for Fury], and he’s a problem because he’s out there, he’s not under the watchful eye, and he’s around all these ‘yes-men.’

“When he [Fury] gets off the plane in Las Vegas, he’s got over 200 yes-men waiting for him, looking to get that from him.

“He’s the pied piper, isn’t he? That’s what he does. People follow him around to get what they can. ‘Yes, Tyson. You’re the best in the world. We love you.’

“This kid has seen it all before in my life. They don’t love you. They don’t care about you. And they just want your money and your profile to make their status bigger by being around you,” said John.

You can sense the desperation on John’s part, wanting to get Wilder out of the way so that Fury can move ahead for the big payday against Anthony Joshua in 2022.

When you see the kind of desperation that John is showing, it suggests that he’s thinking too much about the wrong thing.

Instead of seeing the Wilder trilogy match as part of the sport, John is skipping head, thinking about the big-money clash with Joshua. That’s a big mistake.

Fury has lost his ability to move

“I see him [Fury] doing a minute on the pads in America and then talking afterward. I witnessed it first hand; And I thought, ‘This isn’t making sense for me.’ 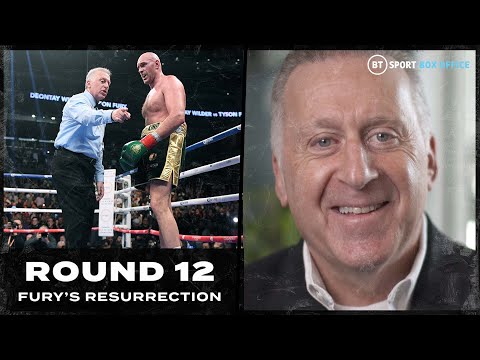 “He sort of lost his bit of movement that he had. For my money, he used to be elusive, and he used to be awkward, coming at you from all different styles.

“He’s [Fury] gone a bit one-dimensional because of what they’re trying to do. They’re concentrating too much on a knockout, and all of a sudden, what happens to Kronk fighters?

“They either knock their man out or get knocked out themselves. That’s what I don’t want to happen. I said, mix the Kronk together, mix the two together, become a box fighter, and do it in intervals.

“But you can’t do that with big dangerous punchers like Wilder. I say box his head off, punch his head up for 15 to 20 seconds every round.

I wouldn’t say Fury has lost his ability to move because he clearly can still get around the ring.

The changes that Fury’s Kronk Gym-trained coaches SugarHill Stewart and Andy Lee have made to his game have made him more aggressive and less willing to move like he used to.

It worked for Fury last time he fought Wilder to walk him down, but it might be disastrous if he tries the same thing in the trilogy match on October 9th.

“I was happy [with Fury’s last performance against Wilder], but lightning never strikes twice in the same place.

“What you seen then and what you see now is two different things because obviously, his team is training to adjust what he did then.

“They’re making adjustments so that don’t happen again. So we got to make adjustments, and it’s those adjustments I don’t see him [Fury] making in America.

“He’ll make them here, but in America, not adjustments and timing and boxing. One mistake, and it’s over. Deontay Wilder, if he gets on you properly, you’re in trouble, and we just don’t want that.

“If he [Fury] listens to me, and he probably won’t because I won’t be part of his camp because it’ll be a big argument like it always is, and he’ll get the smoke blowers.

“They’ll all get around him, and I’ll be parked up again because I’m not glamorous. I don’t run around in a Rolls Royce.

“I make sense in the fight game. We’ll see. I’ll chip away at his head,” said John Fury.

Of course, Team Wilder are making adjustments to his game, as we’ve seen with all the movement Deontay is using in his workout clips.

Wilder isn’t going to let the 270+ lb Fury walk him down and club him into submission using his 40+ lb weight advantage like he did last time.


« Jamel Herring and Shakur Stevenson to fight on Oct.23 in Atlanta