Arum states that if AJ loses to Usyk, he’ll have Fury (30-0-1, 21 KOs) fight a quality fighter in the U.S while he waits for Joshua to avenge his loss to the Ukrainian talent in a rematch.

What Arum isn’t saying is what his plans will be if Joshua loses both fights with Usyk. Does Arum still make the Fury-Joshua fight under those circumstances, or does he elect to put off the match until his promoter, Eddie Hearn, quickly rebuilds Joshua?

Should Joshua fight Usyk again if he loses on Sept.25th?

Joshua, 31, won’t have it any other way but to try and avenge his loss to Usyk, but it might not be a good idea. Although Joshua was able to even the score against Andy Ruiz Jr by beating him in their rematch in December 2019 after losing the first fight in June of that year, he could lose a second fight to Usyk.

History has shown us repeatedly that heavyweights that lose the first fight against a foe tend to get beaten in the rematch.

Joe Frazier is an example of that. After being destroyed by George Foreman in 1973, he made the mistake of facing in a rematch in 1975 and was blasted out a second time. 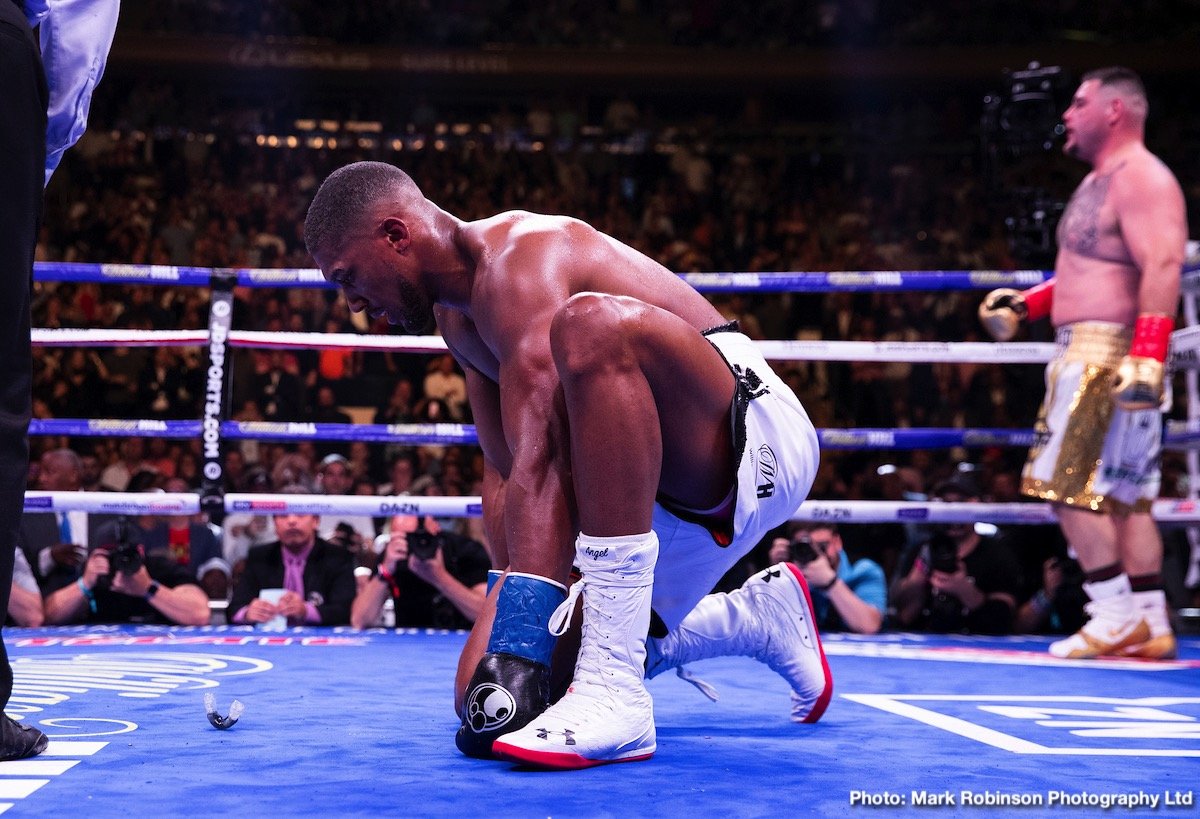 Wladimir Klitschko had the right idea to choose not to avenge his knockout losses to Ross Puritty and Corrie Sanders. Instead, Wladimir let his big brother Vitali Klitschko gain revenge on his behalf by beating both of those fighters.

Depending on how frequently Joshua fights and the type of opposition his Matchroom Boxing promoters in England pit against him, it could take at least a year or so before he’s fully rebuilt to the point where boxing fans would be willing to pay in high numbers to watch him fight Fury on pay-per-view.

One can argue that it would be a massive mistake for Hearn and Matchroom to let Joshua fight Usyk a third time if he’s already lost his first two fights.

You’ve got to figure that if Joshua has already been beaten twice consecutively byUsyk, he doesn’t have it in him to beat the Ukrainian fighter.

The original plan is for Joshua and Fury to win their interim fights against Usyk and Deontay Wilder before meeting in the first quarter of 2022.

However, Joshua (24-1, 22 KOs) has a potential banana skin in his path in the form of 2012 Olympic gold medalist and former undisputed cruiserweight champion Usyk (18-0, 11 KOs) next month.

Joshua could very well this fight. Although small for a heavyweight at 6’2″, southpaw Usyk is fast, clever, and highly mobile. He finds a way to win, and he’s not bothered by the size of the heavyweights he’s faced since moving up to the division in 2019.

Arum has options for Fury

“There are a lot of good heavyweights that we could fight,” Arum said to Sky Sports about Fury in the event Joshua loses his September 25th fight against Usyk.

Arum isn’t saying who those heavyweights are that he would use to keep Fury busy. He would have to know that it would need to be a solid fighter for him to impress the U.S audiences.

In other words, it’s NOT a good idea for Arum to match Fury against another Tom Schwarz, Francesco Pianeta, or Sefer Seferi-level heavyweight to keep him busy until Joshua hopefully avenges his loss to Usyk.

Putting Fury in with another low-level heavyweight would work against him, causing U.S fans to lose interest in watching him fight.

“Tyson, because of his personality, has really appealed to the American audience and is such a big favorite in the US.

“He is larger than life, he is a straight talker, and people in the States love him.

“We would do a fight for Tyson in the US while Joshua and Usyk finish their business,” said Arum.

“In ordinary times, a guy like Usyk, against a 6’2” heavyweight, has a really good shot.

“But against a massive guy like Joshua? It may be a bridge too far.”

Interestingly, Arum didn’t mention the genuine possibility that Fury could lose his October 9th trilogy match against Wilder. If that happens, Fury will be in the same boat as Joshua, needing to take a risky rematch that could potentially wreck his career,