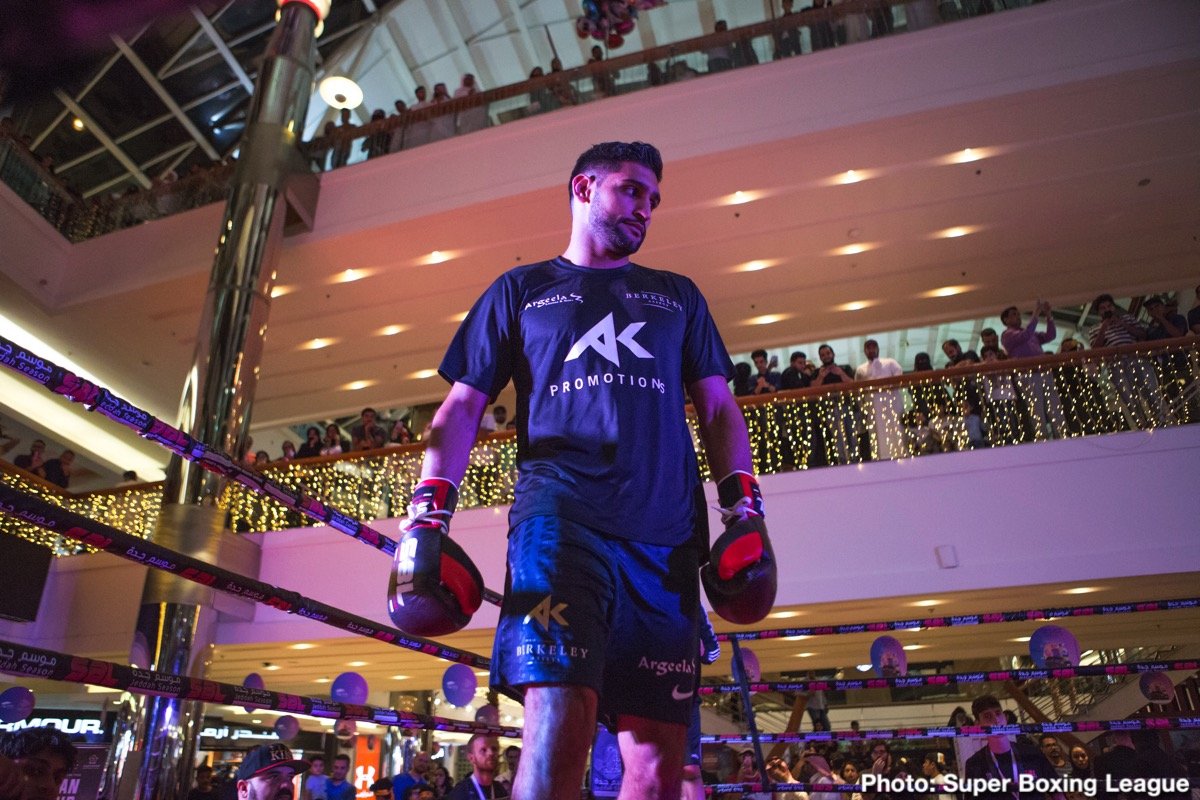 By William Lloyd: Eddie Hearn met with Amir Khan earlier today to plan the long-awaited mega-fight between him and Kell Brook for later this year on DAZN.

Boxing fans view the Khan-Brook fight as a clash that passed its sell-by date, but as soon as it’s announced, people in the UK will get excited about it and be chomping at the bit to see the two go at it.

The 16-year professional Khan (34-5, 21 KOs) has finally decided that he’s ready to face former IBF welterweight champion Brook (39-3, 27 KOs), and it’s obviously very late in the game for this fight to be put together.

Although Khan and Brook are both relatively young at 34, unfortunately, their respective careers went down the tubes many years ago. Khan hasn’t been the same fighter he once was since 2011, whereas Brook saw his career bottom out in 2016.

It’s still too early to know if Hearn and his Matchroom Boxing promotion will be the one that stages the Khan vs. Brook event, as it’s expected to be shopped around. Hearn has a chance of getting the fight if he makes a big enough offer.

Had a good catch up with @EddieHearn #Boxing #DAZN pic.twitter.com/luM3pNzyps

Hearn has seemed ambivalent lately with his comments about the Brook vs. Khan fight, saying that he would rather see one of them take on the young welterweight prospect Conor Benn.

It would be great for Hearn if Brook or Khan chose to help Matchroom out by taking on Benn (18-0, 12 KOs), but there’s no upside in either of them agreeing to do that.

Benn is unknown outside of the UK, and he still hasn’t faced a true contender during his five-year professional career.

If they don’t face Conor, they could regret it when or if he’s exposed as a hype job down the line once Hearn takes the training wheels off and throws him in with a quality welterweight.

“We always talk about the Kell Brook fight, which we are in talks with,” said Khan on social media. “Putting Kell in his place, beating him and then calling it a day from the professional ranks.

“Now the biggest fight out there in the UK that people want to see is myself and Kell Brook. So, I want to put him in his place and call it a day.

“There are always other options out there definitely, but the thing is, I’d rather take that pay cut and come back to the UK and fight someone like Kell Brook to put him in his place just for the fans and the people that have been following me because it’s more of a British fight.

“I’ve made my name in Britain, and I want to have that big fight over here for them. AJ and Fury is the biggest fight for British boxing. I think second has to be [Khan vs. Brook,” said Khan.


« Dillian Whyte ready to face Wilder on Oct.9th if Tyson Fury pulls out