By Sean Jones: Tyson Fury is predicting a knockout of challenger Deontay Wilder within three rounds on July 24th, and he’s not worried at all about him losing.

One thing that’s worrisome about Fury is how he’s visibly aged in the face since last year. Fury looks considerably older than he was when he fought Wilder in February 2020.

Also, Fury’ has lost muscle size and weight, which makes him look withered. If Fury can get back up to 270+ lbs, he’ll have an easier time against Wilder.

WBC heavyweight champion Fury and Wilder met on Tuesday in a press conference in Los Angeles to publicize their fight next month on PPV from the T-Mobile Arena in Las Vegas, Nevada.

Fury did all the talking during the press conference after Wilder made a brief speech in which he said that he’s out for blood on July 24th.

After saying a few words, Wilder clammed up completely and let Fury talk bad about him without answering back.

“All the excuses if you combine them all together, they’re not worth two cents,” said Tyson Fury about Wilder.

“It’s all s***. He got battered, and he’s going to get battered again. Hopefully, zero, nothing so there’s no excuses,” Fury said when asked what does he think Wilder will wear into the ring.

“It is what it is, the judges made the decision. We’re fighting here not because I want to give Wilder another fight because I don’t, he doesn’t deserve one.

“But because the judges ordered and we can’t go against what the judges said. Yes, inside the first three rounds,” Fury said when asked for a knockout prediction.

“No, that’s just me being the Gypsy King,” Fury said upon being asked why he didn’t wear a shirt during the press conference.

Well, Fury shouldn’t have signed the rematch clause in his contract with Wilder a year ago if he didn’t wish to fight him again. Wilder making a voluntary defense of his WBC title against Fury last year, which is why there was a rematch clause.

Interestingly, Fury treated it like it was a mandatory defense on his part, but it wasn’t. That’s why the arbitrator sided in Wilder’s favor.

Tyson not concerned with speed

“This fight is another routine fight for me,” Fury said. “It’s just a fight. Deontay Wilder, I’ve already beaten him twice.

“What is he going to bring to the table? I don’t know, we’ll find out. I don’t think you can get much more of a one-sided affair than the last fight.

“Hopefully, I’m going to take him out early this time. Seven rounds he lasted last time, which is a long time to get beat up on.

“So this time, I’m hoping to take him out early, one, two, or three max,” said Fury.

If Fury can trap Wilder repeatedly against the ropes like he did last year in February 2020, he won’t need hand speed to beat him.

With that said, if Wilder can keep the fight in the center of the ring, he’s got a chance to blast Fury out with one of his big right-hand shots.

Wilder will always have better hand speed ad power than Fury, so there’s nothing he can do to match him in those departments. 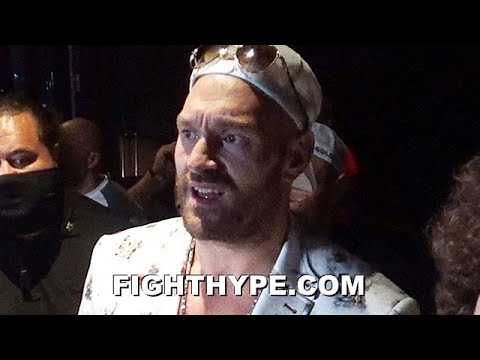 Lomachenko rematch could be next for Teofimo after Kambosos »