By Brad Slotnick: Regis Prograis says Gervonta ‘Tank’ Davis would never fight him because he’d whoop his backside if he did.

The former two-division world champion Gervonta (24-0, 23 KOs) is moving up to 140 this Saturday night to challenge WBA Mario ‘El Azteca’ Barrios (26-0, 17 KOs) on Showtime Boxing at the State Farm Arena in Atlanta, Georgia.

There was hope by some boxing fans that if Tank Davis wins on Saturday, he’ll stick around at 140 and defend the WBA title against #6 Prograis (26-1, 22 KOs) in his next fight.

There would be a lot of interest from boxing fans in a fight between Tank Davis and Prograis, and it would show whether he’s for real or not.

It would be risky for Davis to fight Prograis, a lot risker than the fights that he’s been taking in during his eight-year professional career.

Tank Davis is like an ATM, bringing in unlimited money to Mayweather Promotions without them needing to match him tough against elite-level fighters.

Tank is being matched similarly to WBC middleweight champion Jermall Charlo right now, and that pattern of careful match-making might not ever change.

“I think realistically, probably me and Mikey Garcia,” said Regis Prograis to Fighthype about his next fight.

“Me and Crawford probably won’t happen because I’m not going to 147 right now, I’m staying at 140. I want to win another belt at 140 again. Adrien Broner don’t wants no parts of me.

Mikey Garcia says he wants to fight. I want the fight. I talked to Robert Garcia, his brother, and he says he’s interested in that fight.

A lot of people are interested in that fight so me and Mikey Garcia might be next. Tank isn’t going to come anywhere close to me.

So let’s see what he does with Mario Barrios first. I think he should be able to beat Barrios, but it will be a tough fight for him,” said Prograis about Tank.

Davis’ fight against WBA secondary 140-lb champion Mario Barrios is a one-and-done type of affair, which is why Prograis has no chance of getting a fight against him.

Mayweather Promotions saw a weak champion in Barrios for Tank to pad his resume with, so they’re letting him take the fight.

But if this were Prograis holding the WBA title, Tank and Mayweather Promotions would treat him like he had the plague. After looking at the way Tank Davis has been carefully matched during his career, his promoters are opportunists.

They see guys like Barrios, Leo Santa Cruz, Yuriorkis Gamboa and match Davis up against them for easy wins.

In the meantime, the casual boxing fans give them cover by not pointing out the obvious about Davis fighting weak opposition.

Regis feels he should be undisputed 140-lb champ

“I think me and Josh Taylor are going to fight three times,” said Prograis. “It might be [a trilogy]. I feel like I should be undisputed. 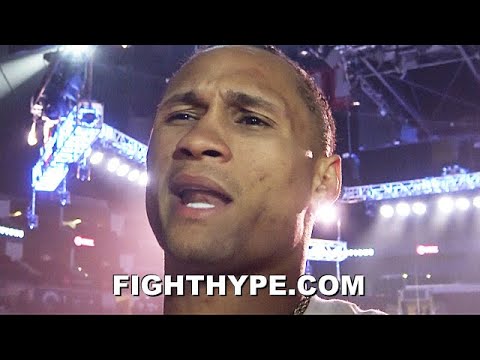 “I feel like I really won that fight [aganist Josh Taylor]. If it was here [Las Vegas], I would have got the decision.

“It was very, very close, and I would have gotten the decision. Either one of us what have beat [Jose] Ramirez, I really think that, and that’s how he became undisputed.

“You can’t cry over spilled milk, it’s over,” said Prograis about his loss to Josh Taylor in 2019. “I congratulated him, I always congratulate Josh Taylor.

It’s not surprising that Prograis lost the fight, though, because it took place in London, England. Taylor is from Scotland, so you can figure out why he wasn’t given the ‘W.’

What really hurt Prograis’ chances more than anything in getting the victory was the way that he chose to fight Taylor on the inside for the first six rounds.

Taylor got the better of Prograis in each of those rounds, and built up a big lead.

“Mario Barrios, that’s all I see because when you get to looking ahead that’s how you make mistakes and get tripped up, and you fall,” said Mayweather Promotions CEO Leonard Ellerbe to Fighthype about what comes next for Gervonta Davis after his fight this Saturday against Barrios.

“There’s nothing bigger than Mario Barrios, nothing and nobody,” said Ellerbe.

Tank Davis’ last fight against Leo Santa Cruz showed that he’s not good enough even to look past aging past his prime 130-pounder, let alone a huge 140-pound world champion like Barrios.

It’s a good thing that Ellerbe isn’t overlooking Tank’s opponent on Saturday because if he slips up, he could get knocked out by Barrios in this fight.

Prograis is probably right about Tank not wanting to fight him. However, it’s not just Tank that wouldn’t agree to that fight.

His promoter Ellerbe and the other top brass at Mayweather Promotions aren’t going to Davis (24-0, 23 KOs) mix it up with Prograis. There’s too much risk involved in that fight.

Mayweather Promotions have obviously scouted Barrios well, and feel that he’s not good enough to beat their money guy Tank. If they thought this was a 50-50 toss-up fight, they would never let Tank anywhere near Barrios.

In other words, Barrios would be off the list, and not even considered as an option for Tank.