Joshua says Fury fight will be bigger after he beats Usyk

By Charles Brun: Anthony Joshua still believes that a fight between him and Tyson Fury can happen this year, provided they win their next fight. IBF/WBA/WBO heavyweight champion Joshua says the match against Fury must happen.

AJ may end up regretting that he didn’t vacate his WBO trinket to swerve the fight with Usyk to go straight for the pot of gold against the Fury vs. Deontay Wilder 3 winner.

No one cares about Joshua’s fight with Usyk, and that’s why it’s silly for him and Matchroom Boxing to be bothering with it.

Joshua (24-1, 22 KOs) states that his next defense against his WBO mandatory challenger Oleksandr Usyk doesn’t determine whether the clash with Fury (30-0-1, 21 KOs) will be taking place. It’s going to happen anyway.

Additionally, AJ says that the Fury fight will be bigger after he beats Usyk, which may be true to some extent, but not by a huge amount.

If anything, Joshua’s popularity might increase a small amount after he beats Usyk, but you’re not going to be his star power going way up.

I mean, the boxing world already saw Usyk struggle against the faded 37-year-old journeyman Derek Chisora last October. But, after that pedestrian performance by the 34-year-old Usyk, he’s not being given much of a chance by boxing fans.

NEWS:   Tyson Fury vs. Anthony Joshua could be dead by Monday

Joshua targeting Fury fight for the end of the year

“Unfortunately, his team let the whole boxing world down,” said Joshua to Sky Sports News. “Then boom, they canceled. I stay ready to fight them all because I’m a throwback fighter.” 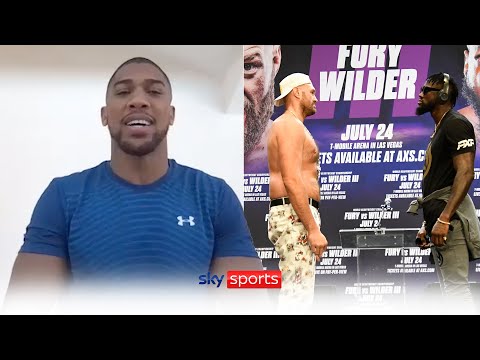 “End of the year. Let me get past Usyk first. But with or without Usyk in my life, I will fight Fury,” said Joshua.

“It will happen. After the Usyk fight, after I defend my belts,” Joshua said about a fight with Fury.

“The fight will be bigger, better than what it would have been,” said Joshua.

Charles Brun hates to say it, but it’s a mistake for Joshua to be looking past his fight with Usyk because he could wreck the Fury fight. All that gold bullion that Joshua and Fury would have gotten will be gone.

Joshua should have learned his lesson when Andy Ruiz Jr knocked him out in 2019 after looking past him towards a fight with Deontay Wilder.

Now it’s like deja vu, with Joshua counting the Usyk clash as already a victory in the win column. That is so dumb it’s beyond words.

After Usyk beats Joshua, there’s going to be a lot of Monday morning quarterbacks second-guessing the decision by AJ and his team to have taken this fight.

I can see Eddie Hearn giving the old ‘Mistakes were made’ speech to the fans in distancing himself from the decision to make the Usyk fight.


« Vasily Lomachenko returns this Saturday against Masayoshi Nakatani on Espn