By Allan Fox: Oscar De La Hoya predicts that his rematch with Floyd Mayweather Jr will outdo the 4.4 million pay-per-view buys Floyd’s fight with Conor McGregor hauled in when they fought in 2017.

De La Hoya believes the boxing public will be enthusiastic about watching him and the 44-year-old Mayweather Jr fight because they know it’ll be a “real fight.”

De La Hoya still has to win his next two fights against Vitor Belfort on September 11th and then Anderson Silva.

De La Hoya says if he can beat both of those guys and look good, he feels confident that Mayweather (50-0, 27 KOs) will agree to fight him.

Oscar could have a difficult time beating the much bigger former UFC champion Belfort in September,  as he’s taking on a powerful fighter with a big size advantage over him.

De La Hoya was a great fighter back in his day, but he hasn’t fought since 2008 in a losing effort against Manny Pacquiao.

Many boxing fans believe De La Hoya was a shot fighter by that point in his, which makes it difficult to imagine that he’s got enough left in the tank to beat Belfort and Silva.

“He’s a big guy. I didn’t realize how big he was,” said De La Hoya to Fighthype about his September 11th opponent Vitor Belfort. “That’s okay; I’ve got a good chin. 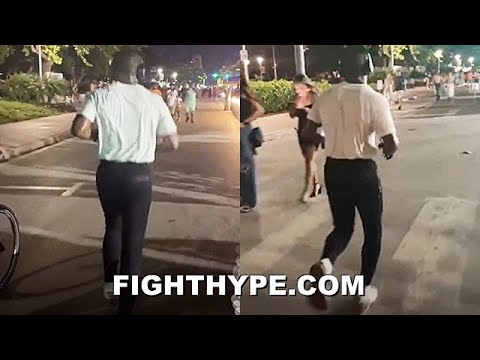 “If I get past Belfort and then go again in November and then maybe challenge Anderson Silva,” said De La Hoya. “And then after that, challenge Floyd Mayweather Jr.

“I think so,” said De La Hoya when asked if he thinks he can get Mayweather to fight him. “It’s all about money for him, so why not? I think there’s a lot of money for him to make in that fight. Yeah, I think so.

“I beat him the first time. Let’s put it that way. That’s his motivation,” said De La Hoya in stating that he believes he deserved the victory over Mayweather in 2007.

De La Hoya is likely right about Mayweather agreeing to take the rematch with him because the money will be too tempting for him not to take the fight.

Maybe it’s just a coincidence, but a day after De La Hoya spoke to the media about a rematch with Mayweather, Floyd got up and hit the streets in what looks like an early start to training.

“I think we can outdo the Conor McGregor [vs. Mayweather fight],” said De La Hoya. “It’ll be huge, just because of the rivalry that we’ve had over the years and the fact that people will know that it’ll be a real fight. 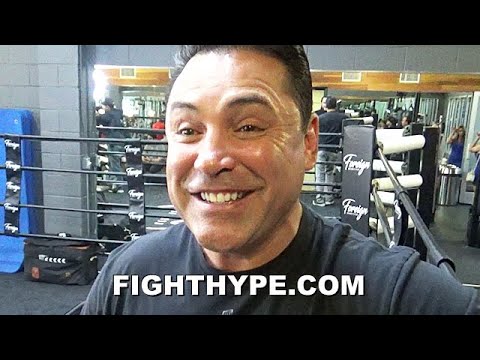 “We’ll make it an event. Triller knows how to put events together. The card will be stacked. It’ll be absurd.

“I have to look impressive [against Belfort]. I have to look like my old self before I fought Pacquiao before getting drained into fighting at 147. 175,” De La Hoya said when asked what weight limit his fight with 44-year-old Vitor Belfort is taking place at.

“No trainer, but I’m actually thinking of calling Floyd Mayweather Sr. to train me. He was the one to bring the best out of me,” said De La Hoya.

It’s a huge stretch of the imagination for a rematch between De La Hoya and Mayweather to bring in more buys on PPV than the 4.4 million that the McGregor clash hauled in.

De La Hoya has been out of the ring for way too long, and the younger boxing fans have never seen him fight before. The other boxing fans that remember De La Hoya during his prime may have drifted away from the sport or passed on.

We’re talking 13 years since De La Hoya retired, and he’d been fading long before he hung up the gloves in 2008.

Chris Eubank Jr could fight for a world title in 2021 »