Chris Eubank Jr could fight for a world title in 2021

By Charles Brun: WBA interim middleweight champion Chris Eubank Jr and his promoter Kalle Sauerland plan on sitting down this week to plan his next two fights, one of which could be for a world title.

At 31-years-old, Eubank Jr can be coddled for too much longer by his promoters at Sauerland because he’s already thrown away the last five years of his career, doing very little since he blew his big chance for a fight against Gennadiy Golovkin in 2016.

If Sauerland keeps Eubank Jr on training wheels for too much longer, he could be ready for retirement. I mean, at what point do you finally put Eubank Jr in with a solid fighter?

Eubank Jr can’t afford to wait too much longer

Yeah, Eubank Jr beat an over-the-hill James DeGale in 2019, but that guy was shot to pieces with a shoulder problem, and he was a shell of his former self.

One of them will be for a world title, but Sauerland needs to plan carefully because Eubank Jr might not be ready. 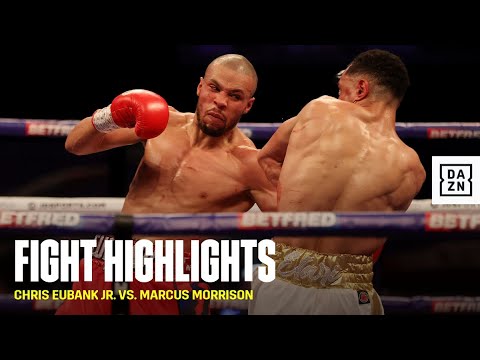 Sauerland will be deciding, along with Eubank Jr and his coach Roy Jones Jr to put him into a world title fight straightaway against WBA ‘regular’ 160-lb champion Erislandy Lara or have him take another domestic-level fight like his last one against Marcus Morrison.

The overall goal for the 10-year professional Eubank Jr is to set up a fight with IBF 160-lb Champion Gennadiy ‘GGG’ Golovkin, but that’s not going to happen in 2021. Golovkin will be fighting just once more this year in December against WBA middleweight champion Ryota Murata.

Based on Eubank Jr’s recent fight against Marcus Morrison on May 1st, he’s not ready to fight for a world title against WBA secondary 160-lb champion Lara (28-3-3, 16 KOs).

Although the talented Cuban Lara is hardly a spring chicken at 38-years-old, his recent performances looked worlds better than what we saw from Eubank Jr against Morrison.

Eubank Jr looked like he had major stamina problems in that fight, and his punch output was woefully bad.

Chris Eubank Jr to fight in August or September

“Eubank has got a massive, massive second half of this year,” promoter Sauerland said to Sky Sports.

“He’s [Eubank Jr] obviously come back with that Morrison fight. We’re sitting down now to work out the plan for the rest of the year. Is it one more fight, let’s say at a domestic level? Do we go straight into the world title fight?

“Expect a big, big announcement in the next week to 10 days, I would say. I think he’ll be out in late August, early September. That’s what we’re looking at right now,” said Sauerland.

I hate to say it, but Eubank Jr is a little long in the tooth to be STILL fighting domestic level opposition, isn’t he? It wouldn’t be a big deal for Eubank Jr to fight British-level fighters still if this was his lot in life and all he was capable of doing.

What can Eubank Jr gain from sticking it out, spinning his wheels on fodder opposition at his late stage in his career? Eubank Jr is the same age as Billy Joe Saunders, so why on earth would he still be fighting domestic level fodder? Is Eubank with the right promoter? You got to ask that question.

Eubank Jr insists that he could have stopped Morrison

“I had him hurt badly in the second round and probably could have ended the fight,” Eubank Jr told Sky Sports after his unanimous points win.

“But I wanted rounds. I wanted to use some of the stuff that Roy Jones has taught me. Experience the instructions he was giving me. I decided to keep him in there.”

Nah, Eubank Jr is kidding himself if he thinks he could have stopped Morrison if he wanted to. No way. The flurry of shots that Eubank Jr threw when he briefly stunned Morrison largely missed, and he ended up gassed out.

After that point, Morrison came on and was walking a tired and scared-looking Eubank Jr down for the remainder of the fight.

Teofimo Lopez Jr vs. George Kambosos Jr could be added to De La Hoya vs. Belfort card on Sept.11 on Triller pay-per-view »