By Charles Brun: Welterweight contender Conor Benn has signed a five-year new deal with Matchroom Boxing, starting with his July 31st match against journeyman Adrien Granados at the Fight Camp in Brentwood, Essex.

It’ll be interesting to know if Matchroom has an early release clause in the contract if Benn’s career suddenly implodes when they eventually put him in with live bodies like Vergil Ortiz Jr, Jaron Ennis, Shawn Porter, Yordenis Ugas, or David Avanesyan.

With that said, Benn can make a lot of money well before he fights for a world title and is found out by one of them.

As long as Eddie Hearn continues to match Benn against guys like Granados, Samuel Vargas, and Sebastian Formella, he’ll do well. If Hearn makes the mistake of throwing Benn in with a fighter like Vergil Ortiz Jr, Ennis, Ugas, or Avanesyan, the party will be over.

In the meantime, Benn can bring in a lot of green due to his last name. Being the son of Nigel Benn makes Conor a cash machine.

If Hearn doesn’t mess things up by sticking Benn in with someone that can actually fight, he’ll become a millionaire many times over even without fighting anyone decent.

With the new deal, the idea is for Matchroom promoter Eddie Hearn to lead the 24-year-old Benn (18-0, 12 KOs) to an eventual world title shot against the likes of Errol Spence Jr or Terence Crawford.

Benn has got his work cut out for him to try and win a world title because it’s a much different story trying to beat guys like Spence and Crawford.

The success that Benn had recently in bum-rushing journeyman Samuel Vargas to score a quick, albeit premature, stoppage last April at the Copper Box isn’t going to work against Spence, Crawford, or any of the solid contenders in the division.

Benn should do well against the 31-year-old Adrian Granados (21-8-3, 15 KOs), as he’s on the downside of his career. Granados’ record in his last four fights: 1-2-1. That puts him on the same level as Benn’s last opponent Samuel Vargas.

Conor and Marku go at it

Benn: “Whenever you’re world ranked. You know it makes sense. I’m pushing on for world titles. It’s good for a big domestic.”

Marku: “No problem, it’ll happen very soon. I will have a title.”

Benn: “We both get paid, that’s what matters. Let him get up there and get world ranked. I’m ranked in every governing body now. The WBA, WBC, WBO, IBO, IBF, so I’m pushing on for world honors.”

Marku: “If I have a father like Conor’s father [Nigel Benn], you know, I would, of course, be ranked in the top levels. because I don’t get the fights that I want. I take a little bit stronger fight than Conor. I don’t blame him for that. He has the opportunities because people know him. I will have a big fight.”

Marku: “The first one was s***, and the second one, I was outboxing the guy.”

Marku: “He hits harder than you and it’s a big, big difference.”

Marku: “How old are you now?

Marku: “Three years difference is not a big deal.”

Benn: “You’re fighting former drug addicts and you were losing. Don’t talk to me because it’s silly.”

NEWS:   Eubank Jr to hang up his gloves if he loses to Benn

Marku: “He fights someone with 9 losses, I fight someone with 19-0, but I don’t blame Conor. Soon my time will come.”

Marku: “Who lost? I knocked him down.”

Marku: “Don’t say world ranking because if I had a father like this [Nigel Benn]. The fight will happen, the people want it. I am the newer one.” 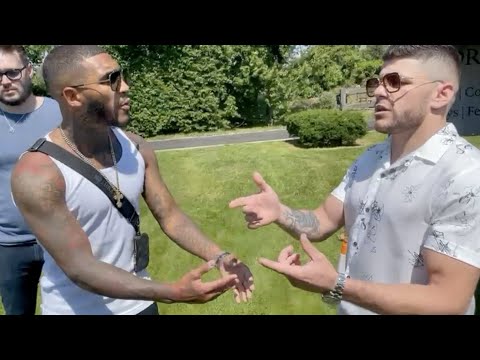