We knew that the former six-division world champion ‘Golden Boy’ De La Hoya would lash back at Canelo after the way he took some shots at him in an interview with Graham Bensinger last April.

Oscar De La Hoya: “Please, this guy [Canelo] does everything wrong; head up when he throws hooks, on his heels, flat-footed. What else? Oh, he avoids @twincharlo [Jermall Charlo].”

De La Hoya makes some valid points with his comments about Canelo. It’s obvious that Canelo IS flat-footed, and he does tend to have his head up when he throws his hooks.

The 30-year-old Canelo has always been flat-footed since day one, and that’s not going to change at this point in his career.

At 5’8″, Canelo is built like a little tank, and he’s too heavy for his limited height for him to be light on his feet the way mobile fighters are.

Has Canelo been avoiding Jermall Charlo?

NEWS:   Jermall Charlo - "I'll be back in February"

As far as Canelo avoiding the talented unbeaten WBC middleweight champion Jermall Charlo (31-0, 22 KOs), that’s up to the fans to decide whether he’s avoided him.

Charlo has been a professional since 2008, he’s undefeated, and he’s been calling Canelo out for many years now. Is it Charlo’s fault that the fight with Canelo hasn’t been made or the other way around?

Canelo is the money man in North American boxing, and it’s difficult to imagine Charlo saying ‘no’ to a fight with him if he was given a chance.

Canelo said, “He [De La Hoya] doesn’t do anything in Golden Boy. He’s worried about drinking. He isn’t Golden Boy.”

Canelo’s comment about De La Hoya likely is the reason for the Golden Boy boss to fire back some shots in retaliation. The only question is, why did it take De La Hoya so long to say something?

Canelo’s interview with Bensinger was well over a month ago in April, and it’s only now that De La Hoya is speaking up.

From watching Canelo’s interview, one can tell that there’s some bad blood there with De La Hoya, and it’s too bad. De La Hoya has been with Canelo during some of his best years and guided him carefully.

Whether it was De La Hoya that decided on picking Canelo’s opponents are the Golden Boy staff is unclear.

De La Hoya isn’t someone that would try and force one of his fighters to take on a risky opponent that he felt they had no interest in fighting.

For that reason, you can’t blame De La Hoya for Canelo never fighting Jermall Charlo. Surely, if Canelo wanted that fight with Charlo, it likely would have been made ages ago. Charlo wouldn’t turn down $10 million+ to fight Canelo, no way.

With the huge paydays, Daniel Jacobs and Sergey Kovalev got in their fights with Canelo. There’s no chance that Charlo would turn down that green to face the Mexican star if it were offered to him. 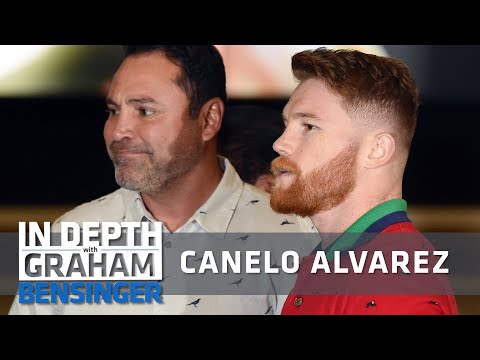 
« Ricky Hatton: Pacquiao must raise his game against Spence