Ricky Hatton: Pacquiao must raise his game against Spence

Hatton does have concerns about the 42-year-old Pacquiao due to his age and the fact that he’s taking on one of the best fighters in the 147-lb division in Spence (27-0, 21 KOs).

Pacquiao is bravely or foolishly, choosing to fight with the 31-year-old Spence without a warmup fight to get him ready, which he could be sorry for later.

It’s questionable whether Pacquiao can raise his game high enough for him to have a shot at beating a guy like Spence. This is a guy that Pacquiao would have had fits against at any point in his career.

This fight has nothing to do with his age. If you’d plugged Spence in there with Pacquiao during his heyday against the like of Juan Manuel Marquez and Erik Morales, there’s a good chance he would have lost to him just on size and power alone.

Spence is too big, too long, and too powerful for the little 5’5 1/2″ fireplug Pacquiao.

Is Pacquiao biting off more than he can chew?

“He’s [Pacquiao] a very clever person,” said Hatton to the Metro. “You have got to put faith in him and the team behind him and assume they are clever enough to know what they are doing.”

“Compared to Keith Thurman, who Pacquiao beat in 2019, Spence is a little bit sharper, a little bit crisper in what he does,” Hatton continued.

“If you are still performing at the highest level why not? But he will certainly have to raise his game again against Spence, he is a hell of a fighter,” Hatton said of Pacquiao.

There’s a considerable difference between the level that Spence is fighting at compared to the level of the smaller 5’7″ Thurman was at when he fought Pacquiao in 2019.

Thurman wasn’t at his best when he fought Pacquiao, and yet he still came close to beating him. Spence is fighting at a higher level, and he’s a lot bigger at 5’9.”

Pacquiao’s best chance of winning this fight is for him to crowd Spence and hope that he’s willing to go toe-to-toe.

If Spence chooses to box the former eight-division world champion, Pacquiao, as he did with little 5’6″ Mike Garcia, it’s going to be a one-sided fight.

There’s no chance that Pacquiao will be able to get past the jab and long reach of Spence if he chooses to box him. Chris Williams doesn’t think Spence will do that, though.

Spence will give Pacquiao a chance

Clearly, Errol will fight Pacquiao’s fight out of respect for him and for the boxing public, knowing that this the type of bout that they want to see. 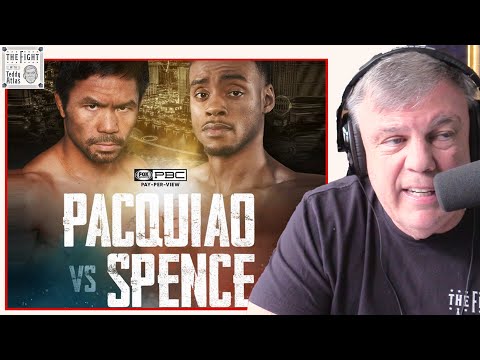 Spence won’t waste his opportunity to shine against Pacquiao the way that Floyd Mayweather Jr did in 2015 by fighting a boring safety-first fight from the outside.

“The fact that he is accepting this fight only means he must feel he is still capable of mixing it up at that level,” said Hatton of Pacquiao.