Teofimo Lopez: I’m the best in the world

By Jim Maltzman: Teofimo Lopez is still a little irritated that boxing fans don’t view him as the undisputed lightweight champion after his victory over IBF/WBA champion Vasily Lomachenko.

The fans tell the 23-year-old Teofimo that he still needs to beat Devin Haney to become the undisputed champion at 135 because this WBC Franchise title doesn’t count as a real belt.

It’s not a big deal because Teofimo is recognized as the undisputed champion by some fans, particularly the casuals.

The New Yorker Teofimo (16-0, 12 KOs) will be defending against IBF mandatory George Kambosos Jr (19-0, 10 KOs) in the main event on Triller pay-per-view at the LoanDepot Park in Miami, Florida.

Teofimo will eventually get his chance to show that he’s the true undisputed champion at lightweight. For now, he’s got to take care of business on June 19th.

This won’t be an easy fight for Teofimo, but he’s confident that he’ll take care of the highly confident Australian.

Kambosos Jr is easily the most self-assured fighter that Teofimo will have faced in his career, making him dangerous. He doesn’t know how to lose yet, and he’s enjoying unnerving the younger Lopez.

Teofimo’s goal is to be avoided

“One, it’s a different style, and two, it’s a less experienced guy, but he still knows what he’s doing,” said Lopez to Fighthub about his fight with Kambosos Jr on June 19th.

“He has the number of years in the game,” Teofimo continued about Kambosos Jr. “What I’m trying to do in this camp is perfect my craft so much that I look so invincible come June 5th that all these 135-pound guys in the division stay quiet.

“They don’t want to fight Teofimo again because of what he did. I’m going to keep putting it on each and every time, but we’re going to make those fights happen too. But right now, my main focus is George Kambosos.

“This is the new modern-day era. This is the modern-day era of the sport of boxing,” Teofimo continued. “Look what Triller is doing now. A lot of people don’t realize that. We’re collaborating with these artists,” said Teofimo.

It’s not a good idea for Teofimo to be setting a goal for himself to be avoided by the top fighters because this could limit his future earnings.

That suggests that Teofimo wants to be isolated at the top, fighting lesser opposition and missing out on opportunities for big-money fights.

Lopez: Kambosos is not Lomachenko

“I’m the best in the world,” said Teofimo when asked what makes him believe he’ll KO Kambosos in three rounds or less. The Lomachenko fight elevated me.

“It didn’t lower me; it elevated me. When you fight the best, beat the best, you learn something from the best fighter, and I learned a lot of tactics from him [Lomachenko]. People said that he was a God, and I did that.

“Kambosos is not Lomachenko, but I’m not going to overlook Kambosos neither,” said Teofimo. “Everybody has a different style, and one punch can change a whole fight. We all got a game plan until you get punched in the mouth,” said Teofimo.

With Teofimo’s weight advantage, he’s got an excellent chance of defeating Kambosos Jr on June 19th.

When the two fighters stood face to face during their recent press conference, Kambosos Looked considerably lighter than Teofimo. 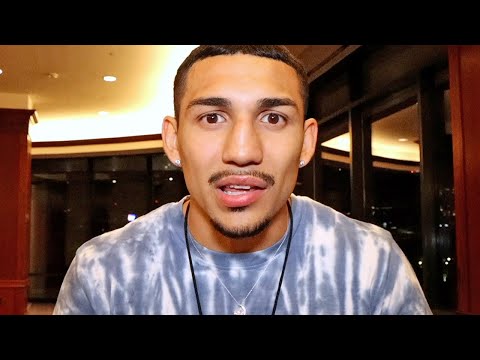