With Canelo Alvarez now a network-free agent, DAZN will need to make him a big enough offer to bring him back to their streaming service for his next fight against the unbeaten IBF super middleweight champion Caleb Plant (21-0, 12 KOs).

Canelo vs. Plant is being targeted for September 18th in the U.S, possibly in Las Vegas.

Caleb Plant is with PBC/Al Haymon, and they’re expected to make a large offer to stage the Canelo vs. Plant undisputed championship on FOX Sports pay-per-view.

For DAZN to stream that fight on their platform, it will require a substantial guarantee for Canelo. It’s likely to be difficult for DAZN to bring Canelo back to their network.

FOX Sports will surely give Canelo a massive offer for the Plant fight to stage it on pay-per-view. It would be a huge victory for them to get the fight, but a major negative for DAZN and their subscribers.

To see Canelo vs. Plant, they would probably need to pay in the neighborhood of $70+ to watch the match on FOX.

What’s impressive about this is that Canelo wasn’t fighting a big name like Gennady Golovkin or Jermall Charlo to bring in the subscribers.

Former WBO super middleweight champion Saunders (30-1, 14 KOs) was only known among the hardcore boxing fans in the United States.

Sources: #CaneloSaunders attracted more than 400,000 new subscribers for DAZN in the U.S. Now a network free agent with two-fight deal expired, DAZN must deliver a massive guarantee to keep a potential bout Sept. 18 vs. Caleb Plant off PPV. Alvarez’s last six fights all on DAZN

“That’s a good fight. Caleb is tricky, he’s got good skills,” said Mikey Garcia to Fighthype about a fight between Caleb Plant and Canelo. “He can move, he can box, and he’s got very good defense, quick hands.

“That’s the kind of fighter that can give Canelo trouble. We thought the same thing about Billy Joe Saunders. He can give him trouble because he’s a really good boxer, a good jab, with a southpaw stance.

“But I don’t think anybody can beat Canelo right now. He’s in his prime at the top of his game. He’s got the confidence, and he’s got the drive.

“I don’t see anybody beating him. They can give him a good match-up, yeah, but I don’t think they can beat Canelo. Canelo is the #1 guy right now; he really is.

“I could tell the eye was busted,” said Mikey bout Saunders. “The socket looked different. I think it was a very good fight for Canelo.

“I had Saunders winning two rounds. I’m not being biased. That’s just how I saw it.

“Boo Boo is a very good fighter,” said Mikey about Demetrius Andrade intruding on Canelo’s post-fight press conference. “So if he’s at 160, he’s going to have to come up to 168.

“I don’t think Canelo is moving down to 160 anytime soon. He’s trying to collect all the belts at 168.

“He’s already unified WBA, WBC, WBO, Ring Magazine champion at 168. So if you want to fight Canelo, go up to 168, and show everybody what you can do. To go to a press conference, I get it. Fighters do it all the time,” said Mikey. 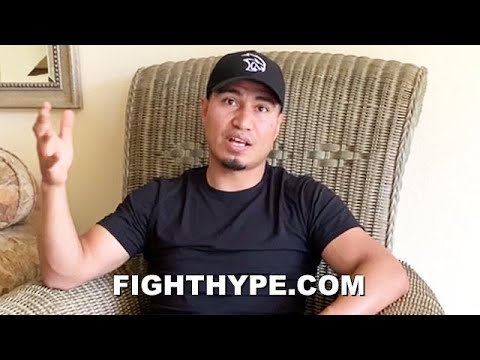 Teofimo Lopez: I’m the best in the world »