By Charles Brun: Eddie Hearn says IBF/WBA/WBO heavyweight champion Anthony Joshua is getting tired of continually defending against different mandatory challengers one after another, and he might be tempted to drop his WBO belt than fight Oleksandr Usyk.

Surprisingly, only now, Joshua and Hearn are starting to realize what a headache it is to hold down three world titles.

Unfortunately, when you’re a champion, you got make annual mandatory defenses, which is why it’s not worth it to hold multiple titles for a long period.

AJ wants to get it over with to become the undisputed champion at heavyweight before he starts vacating his belts, but he didn’t realize how hard it would be to get his hands on the last belt in possession of Tyson Fury.

Joshua (24-1, 22 KOs) just finished making a successful defense against his IBF mandatory Kubrat Pulev in his last fight in December, and now he’s been ordered to defend against his WBO mandatory Usyk (18-0, 13 KOs).

Hearn and Joshua are obviously feeling a little let down at the moment after losing their chance to fight Tyson Fury for the undisputed heavyweight championship on August 14th.

That would have been a big fight with both heavyweights making close to $100 million to battle it out for the #1 slot in the division in Jeddah, Saudi Arabia.

Unfortunately, Fury (30-0-1, 21 KOs) lost his arbitration case with former WBC champion Deontay Wilder last week, and he’s been ordered by the arbitrator to face the ex-champ.

Hearn is still peeved that Fury and his promoters at Top Rank didn’t offer Wilder a step aside, but that would have cost the ‘Gypsy King’ a small fortune.

Looking at where Fury comes from before he struck it rich, he likely never even considered giving away $20 million to Wilder to have him step aside.

Even if $100 grand, Fury may have been resistant to the idea of just giving the money away rather than fighting him. Obviously, Fury’s past success against Wilder played a large part in him choosing not to pay him a step aside to get him to go away.

Fury believes he can beat Wilder. It would go without saying that Fury may have been more willing t pay Wilder a step aside if he’d been twice between by him in the last.

But Fury thinks he can beat Wilder, so he was unwilling to pay him to get out of the way, and he could be sorry for that.

There are no guarantees in boxing, particularly when you’ve been slacking off, putting on weight, and flying all around the world as a celebrity as Fury has been doing since last year.

Joshua tired of fighting his mandatories

“We’re looking at our options, but that is definitely the favorite to make,” Hearn said to Fighthub on a fight with Usyk next. “AJ is a throwback fighter. He keeps having to fight all these guys that he gets letters for. 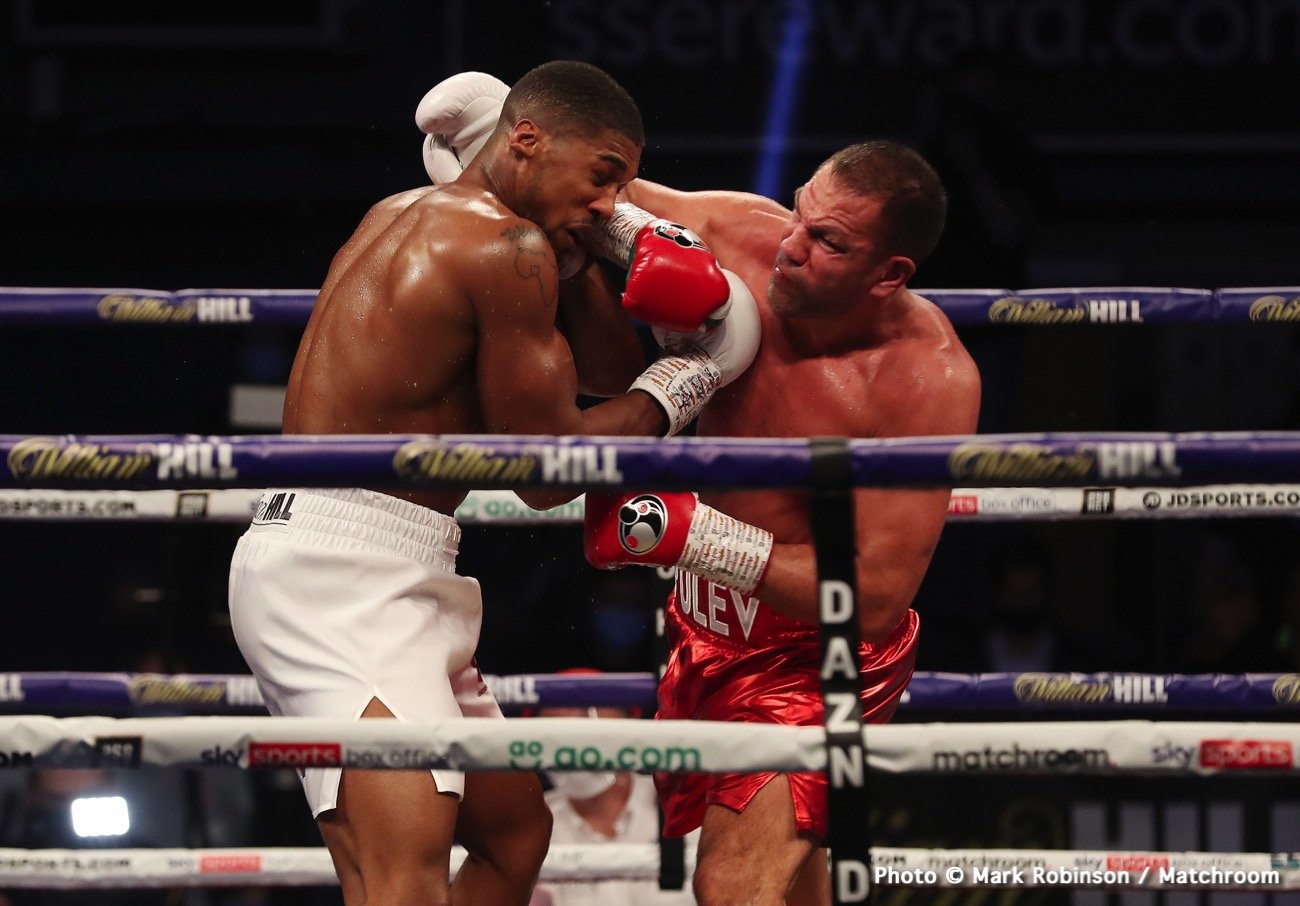 Now we’re getting another letter [from the WBO] to fight another guy [Usyk]. AJ is kind of in the position where it’s like, ‘I keep doing what I’m told, making these fights that are being ordered on these splits.

“But we’re only doing it because we’re dreaming of being undisputed, and that’s fallen through again [with Tyson Fury]. So, I kind of feel like doing my own rather than being told, You must fight this guy,” said Hearn.

There wouldn’t be a problem if Joshua gave up his titles and focused on just making the biggest fights.

No one would actually care because the belts don’t matter at heavyweight, as the boxing public already knows who the #1 guy is in the weight class. Joshua is seen as the #1, Fury #2, and Dillian Whyte #3.

Joshua doesn’t need to become the undisputed champion for him to be validated by the fans because they already respect him as the top guy.

Holding all the belts in the division is a waste of time because nothing will change in the eyes of fans. They already see Joshua as the best, so why waste time making title defenses against no-name fighters like Usyk?

If Joshua had a clue, he’d drop kick the WBO title right now, and deposit the IBF belt in the nearest trash bin. Joshua should hold onto the WBA and face whoever he wants while he waits for the smoke to clear from the Fury vs. Wilder 3 trilogy match on July 24th.

While Joshua waits, he should take on Andy Ruiz Jr or Dillian Whyte and make a lot of noise.

Let Usyk fight Joe Joyce for the vacant WBO title, which would help build a future opponent for AJ. As things are right now, Usyk and Joyce lack the popularity for Joshua to get boxing fans excited about him fighting either of those guys.

But if one of them captures the vacant WBO belt, things will change overnight. Suddenly, Joyce or Usyk will be viewed as credible opponents for Joshua because one of them will hold the WBO title, and there will be seen as a bigger name because of their clash for the strap.

Hearn confident Joshua vs. Usyk can get made

“Since he [Joshua] fought Wladimir Klitschko [in 2017], he was ordered to fight Pulev in his next fight,” Hearn continued.

“Pulev pulled out ten days before, they went down the list, and the #2 was [Carlos] Takam. He was the mandatory. The next fight, he boxed a unification fight.

“After that, he got another letter. ‘You must fight Alexander Povetkin.’ After that, he [Joshua] actually did a voluntary, and he chose Andy Ruiz.

“That’s not exactly an easy voluntary. He [Joshua] lost, beat him, and then he got another letter from the IBF, saying, ‘You must now fight Kubrat Pulev.’

“Okay, we negotiated that, and now he gets another letter, ‘You must now fight Oleksandr Usyk. At some point, yeah, he has gotten tired of it, but he’s more than happy to fight Usyk.

“Maybe, but I think his preference is to keep the belts. He keeps fighting for his dream to be undisputed.

“I’m confident that we can come to a deal and make it, but now when it’s ordered [by the WBO] on splits, people can mess around, people can get purse bids.

“We don’t want to do that. We can make a fight on a fair deal, get it done, and move forward. But I feel like his [Joshua] mindset right now is the Pulev fight was difficult because the IBF’s a different type of split.

“He went ahead and done that because we thought the next fight would be Fury. N

“Now, he’s [Joshua] ordered to fight this guy [Usyk] on another split. He wants to defend his belts with honor. He does, but there may come the point where he [vacates]. I think we’ll be alright,” said Hearn.

It will not be a big deal to make the Joshua vs. Usyk fight, but it’ll take some work and cost money. The hardest part for Hearn and Joshua is the likely fact that they’re not excited about the prospect of fighting Usyk.

If this were a fight that Hearn and Joshua valued, they’d be willing to put up with the hard work that will be required to make it. When you don’t value something, you’re not going to be eager to put in the grueling work to be successful at it.

“Should Joshua opt to give up the WBO title and face lesser opposition than Usyk, then our man Joe Joyce will be ready to take on the Ukrainian,” said promoter Frank Warren to the Daily Star.

“Joyce won’t fear facing Usyk if Joshua decides he doesn’t want to face his mandatory challenger. It would be a shame if Fury against Joshua is not for the undisputed crown, but it is a win-win situation for us,” said Warren.

It’s good to know that Joyce and Usyk will be the ones battling for the WBO belt if Joshua vacates it.

Now, if only Joshua would get a clue and give up the WBO strap so that we can get a semi-final type of fight between Joyce and Usyk for that belt.

It would help liven things up if Joshua relinquished the WBO title and focused on fighting a popular fighter like Whyte or Andy Ruiz Jr next instead of Usyk.

« Jorge Linares: Devin Haney will be running all night