Jorge Linares: Devin Haney will be running all night

By Dan Ambrose: Jorge Linares will be coming off a long layoff tonight to challenge WBC lightweight champion Devin Haney at the Michelob Ultra Arena in Las Vegas, Nevada. The two lightweights will be mixing it up on DAZN at 10:00 p.m ET.

Linares (47-5, 29 KOs) says Haney will have to come up with a different game plan than the boring, predictable one that he used last November for his fight with Yuriorkis Gamboa. If Haney (25-0, 15 KOs) fights like that, he’ll lose, says Linares.

The 35-year-old Linares realizes that he’s a much older fighter than the 22-year-old Haney, but he believes his experience will serve him well in this fight. Haney is the favorite, but that doesn’t mean much because the oddsmakers likely have no clue.

Despite holding down the WBC 135-lb title, Haney has precious little experience as a pro. His only fight against a credible opponent came last year against 39-year-old former WBA featherweight champion Gamboa, and he was coming off an Achilles injury.

That’s the only name fighter on Haney’s resume. Haney’s hype is essentially built on sparring stories between him various fighters rather than what he’s done inside the ring as a pro.

Linares: I can punch. I’m not Gamboa

“I’m not like that. I just need to go little by little to my combinations, and he knows I have a punch. I’m not Gamboa. I know he’ll be running all the night. And I want to kill him and try and catch him.

“I got a lot of punches too, very good combinations and also speed,” said Linares about Haney.

Devin needs to understand that he’s not fighting a tiny old guy like in his last fight against 5’5″ Gamboa. Before Gamboa suffered an Achilles injury, he was a good puncher, but his power didn’t travel up from 126 to 135.

“That’s why I said, if he wants to do the same strategy as Gamboa, he’s going to lose the fight really quick,” said Linares about Haney.

“No, never,” Linares said when asked if Haney is on his level. “He’s a young guy, he has talent, he’s fast, but it’s a different level.

“This is a real fight, and this is why people are so excited at seeing this fight,” said Linares.

“I know very well I can be a champion again,” said Linares. “I need to do an amazing job with my defense because he’s longer. And I think he’s going to run all night, but I don’t know.

“If I catch him with my right hand or hook, I don’t know if he wants to continue the fight. I need to be natural, and I need to use my experience, especially with this guy.

“My plan is to be champion again, defend my belt two or three times, and then retire. He doesn’t have the same experience as me.

“I was a three-time world champion. He’s just a normal world champion, and he hasn’t fought against any big, big names, only Gamboa.

“I’ve fought with amazing lightweights before like Lomachenko, and now I’m going to fight with a baby. It’s something new in my life, and I need to be ready for that,” said Linares.

There are no words to describe how boring Haney’s fight with Gamboa was last November.

The level of boredom that one got from watching Haney fight in his safety-first style harkens back to the days of Floyd Mayweather stinking up the joint in his fights against Manny Pacquiao and Andre Berto.

Those two fights are among the most boring this writer has ever seen, and Haney is right there with Floyd with his performance against Gamboa.

“It’s more about social media,” said Linares when asked about the back and forth trash-talking between Haney and Teofimo Lopez. “Ryan Garcia likes to do that too and also Teofimo Lopez. 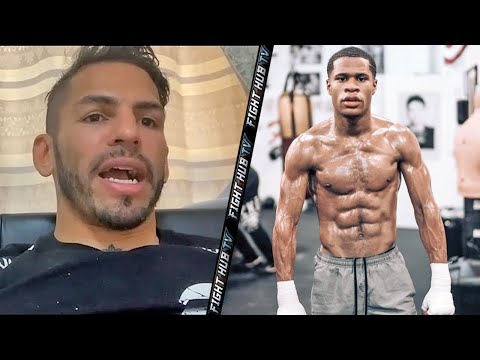 “He’s a champion right now, and I respect that. In the future, I’m ready to fight with him, and I’m ready to do that too.

“I want to go see his fight [with George Kambosos Jr] in Miami after my amazing victory. I think Teofimo can win the fight by decision, but I don’t know.

“I’m ready to get all the opportunity with the best lightweights. I’m excited to fight again in Las Vegas, in his town,” Linares said about Haney.

“I lost a year to corona. There’s a lot of competition at lightweight right now.

“I think he’d kill Pacquiao at that time. He was loco,” said Linares when asked what would have happened if the late Edwin Valero had fought Pacquiao. I love Pacquiao, but this guy was a crazy guy,” said Linares.

If Linares wins tonight, the logical next fight for him will be against IBF/WBA/WBO lightweight champion Teofimo Lopez, as long as he wins his next clash against George Kambosos Jr on June 19th.

Haney’s promoter Eddie Hearn will likely make a big play to set up a rematch with Linares if things go badly for him tonight. This is too important of a fight for Haney to allow Linares to move on if he loses to him.

Hearn has been babbling this week about Haney being the best lightweight in the division, which will make him look silly if he loses.