If the clash with Crawford (37-0, 28 KOs) fails to happen, Taylor, 30, can still be pleased with becoming the undisputed light welterweight champion in holding the IBF, WBA, WBC, and WBO titles in the division.

Crawford, 33, has been looking for a big fight his entire 13-year professional career, and a match against Taylor might be as good as it gets. Unfortunately, Taylor ISN’T a big name in the United States, and it’s not a fight that Top Rank can sell on ESPN pay-per-view.

You can argue that Crawford vs. Vergil Ortiz Jr or Shawn Porter would bring bigger pay-per-view numbers than a fight against Scottish fighter Josh Taylor. That’s the reality.

Taylor might be a big name in the UK, but he’s not a star in the U.S, and his fighting style is somewhat boring due to all the clinching that he constantly initiates to keep his opponents from hitting him.

For Crawford to bring in big numbers on pay-per-view, he needs to fight these guys:

Those fights won’t be easy to make, as Top Rank will need to pay these fighters to face the switch-hitting, counter-punching Crawford. None of these guys will take the fight with the defensive artist Crawford unless the matches pay well.

Recently, Top Rank tried to set up a fight between Crawford and 42-year-old Manny Pacquiao, but the negotiations fizzled out with the Filipino star opting to face IBF/WBA champ Errol Spence Jr.

Crawford could easily fight Porter, but that’s a terrible match-up for him, as his smothering style would negate his counter punching and switch-hitting. That’s a match that Crawford and his promoters at Top Rank aren’t excited about and for a good reason. Crawford could lose and be made to look bad by Porter.

“I’d like to go up to 147 and chase a real, real big fight like Terence Crawford,” said Josh Taylor said after his win over Rodriguez at the post-fight news conference.

“I’m not going to call him out and stuff. I think he’s a great fighter, but I just think two undisputed champions going at it at 147 would be awesome, would be amazing.”

“Anybody who wants to have a fight and it makes sense, and it’s what I want to do,” Taylor said, “I’ll fight anybody.”

He added: “I’m not afraid to fight anybody in this game.”

Taylor came into his undisputed fight last Saturday night at the Virgin Hotels in Las Vegas as the IBF/WBA light welterweight champion against the unbeaten WBC/WBO champ Jose Ramirez (26-1, 17 KOs).

Using the punch and grab technique, Taylor limited the number of shots that Ramirez could hit him with by immediately tying him up in a clinch after throwing shots. 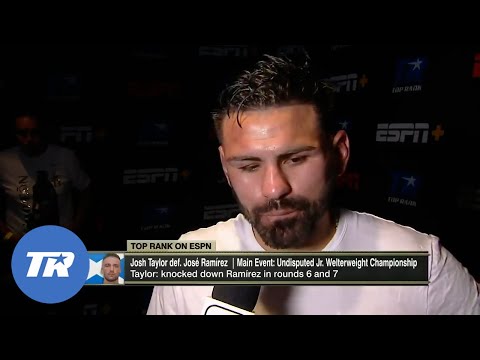 With referee Kenny Bayless not stepping in to warn Taylor about his constant holding, he was able to use the punch & grab to win rounds.

Oooowwweee told em Josh was going to win I felt it