Saunders’ right cheekbone was “indented” after getting hit by a massive uppercut from Canelo, and it was evident that he was injured.

Hearn said that Saunders, 31, will be having surgery to repair his fractured eye socket, which occurred when Canelo hit him with a right uppercut during the eighth round at the AT&T Stadium in Arlington, Texas.

Billy Joe couldn’t see out of his injured eye

Saunders’ eye looked in bad shape as he went back to his corner after the eighth round had ended. After briefly speaking to his cornerman Mark Tibbs, it was decided to pull Saunders out of the fight rather than sending him out for round nine and risk further injury.

Although Saunders was competitive through seven rounds with Canelo, he was getting belted by huge shots to the body and head.

One could see that Saunders was wearing down from the heavy punches that Canelo was landing in rounds seven and eight before the injury occurred.

The perfectly placed punches that Alvarez, 30, was landing was draining Billy Joe like a battery, taking the fight out of him.

“When the uppercut landed and I saw his face, I knew he broke his eye socket. His cheekbone was indented, and he couldn’t see. I spoke to [Saunder’s trainer] Mark Tibbs, and he told Mark Tibbs, ‘I can’t see.’

“They talked about one more round, but he couldn’t see. He was going to get hurt. So they made the decision and pulled him out of the fight,” Hearn said.

Fighting without the ability to see out of his right eye was out of the question for Saunders, which is why he was pulled out of the fight by his trainer Tibbs.

Canelo had his way

It would have been target practice for Canelo had Saunders come out for the ninth round, and there was nothing to gain from the contest continuing.

If Saunders had punching power like a Gennady Golovkin, you could argue that they should have given him another round.

“I thought he boxed well, Billy Joe,” said Hearn. “I thought the judges were a little bit harsh, they gave him two rounds. They probably should have given him three rounds, but he couldn’t put a dent in Canelo Alvarez, could he?

“That was the problem. Canelo was stalking him, taking his time. Obviously, a lot of the eye-catching shots were coming from Canelo Alvarez. In the ninth round, it was all over.

“Saunders is a world-class fighter, he gave Canelo a competitive fight, and he’s a two-weight champion,” said Hearn when asked where does Saunders goes from here.

Canelo to face Caleb Plant next

“It comes down to what he wants to do? He’s made a lot of money from the sport, but I’d love to see him come back. I think he can beat a lot of fighters.

“For Canelo, the Caleb Plant fight is what we want to do. He wants to be undisputed, win all the belts in the [168-lb] division, and that’s the next fight I September. Hopefully, we can get that made. I can’t see Caleb Plant wanting to do anything else” said Hearn. 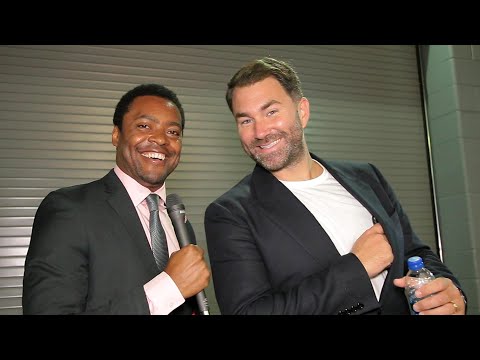