“When are we getting it on?” said Andrade. Alvarez replied, “you haven’t fought anyone.” Paul Andrade intervened and replied to Canelo, saying, “you avoided his Son in middleweight and Jr Middleweight.”

Alvarez, clearly upset about the situation, started to insult Andrade telling him multiple times “to get the fu## out.”

Andrade started to likewise retort and insult Alvarez, who said “he would beat him up” as security escorted Andrade and his father out the room.

I find it rather odd that Alvarez would dismiss to fight Andrade by claiming “he didn’t fight anyone” when Rocky Fielding, Avni Yildrim, James Kirkland, and boxers like Liam Smith and Alfredo Angulo haven’t fought anyone either.

If Yildrim and Fielding are the definitions of two boxers who deserve the Alvarez sweepstakes and Andrade doesn’t, then unicorns exist.

There is no doubt that Alvarez, during his boxing career, avoided Andrade in both middleweight and super welterweight. Interestingly enough, Alvarez is now trying to become undisputed at 168lb, only after David Benavidez lost his WBC belt, but prior to it, he had little to no intentions to clean his new division.

When Alvarez was at 160lb, he had the opportunity to also become undisputed, but he clearly ducked Andrade, who wanted to unify all belts when he obtained the WBO vacant strap after Saunders was caught doing PED’s on suspension, not willing to fight Andrade under equally fair conditions without using performance enhancers. 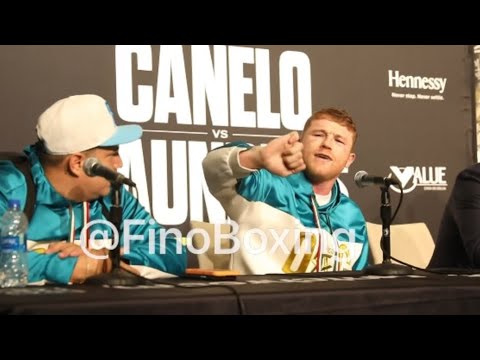 The media didn’t really give Andrade a fair shake since no one questioned why Alvarez decided not to make history at middleweight? Maybe because he wasn’t about to risk a loss with an undefeated American black fighter.

Andrade was also avoided by Alvarez at super welterweight when he had the WBO-WBA belts. Alvarez needs to run it back and fight one of the most avoided boxers in the world because it clearly looks like he doesn’t want the fight.

Andrade thus far has been ducked by Jermell Charlo, Jermall Charlo, Alvarez, Erislandy Lara, Saunders, Jaime Munguia, and Gennady Golovkin, who do not want to fight him.

Many analysts like myself, Max Kellerman, and Andre Ward believe Alvarez would have a tough time against Andrade.

Alvarez is intimidated by Andrade’s boxing style and has somewhat brainwashed many boxing fans into believing it is okay to duck boxers because he is lord and king of boxing.

I do not buy it, not at all; he needs to take care of old ghosts if he wants to earn the credibility of real boxing aficionados that know what is up to.

There is absolutely no excuse why he didn’t fight Andrade. No matter what the Mexican superstar says, he would rather fight Rocky Fielding, Avni Yildrim, and James Kirkland rather than face an American undefeated black fighter.

I won’t buy his excuses, and he hasn’t earned my respect till he finally cleans house and decides to show courage; he has unfinished business.