By William Lloyd: Anthony Joshua’s promoter Eddie Hearn is incredulous that Team Fury didn’t even try to offer Deontay Wilder a step aside deal to save the mega-fight with AJ on August 14th.

Hearn questions whether Fury’s team ever truly wanted the fight with IBF, WBA, WBO heavyweight champion Joshua in the first place because they made no effort to save it.

Eddie doesn’t understand why Team Fury made no effort to find a step aside number that Wilder (42-1-1, 41 KOs) would have agreed to.

Fury’s behavior since losing out on the Joshua fight also strikes Hearn as odd, as he’s not showing any signs of disappointment.

With Fury losing out on the Joshua fight, the $80 million paydays he would have received is now gone.

Instead, Fury might get $20 million to fight Wilder in a trilogy match on July 24th in a fight that will be risky for him. It doesn’t make sense for Fury to walk away from the massive payday against Joshua in Hearn’s mind.

If Fury had paid Wilder a $20 million step aside from his $80 million purse, he’d still have $60 million, which is considerably more than the $20M he’ll be getting for the Deontay trilogy on July 24th.

Hearn would have offered Wilder a step aside

“To call up to say, ‘I can’t believe it. It’s preposterous. We’re just going to go ahead with the [Fury vs. Wilder III] fight. Cheers, mate.’ If that were me in this case, I would have done absolutely everything that I could to save this fight.

“They didn’t try and do one thing, and that also sits on Tyson Fury because he never tried to do one thing either.

“Stand up for himself, say, ‘What’s going on here? You’ve told me I’m fighting Anthony Joshua. I’ve had an offer for all this money, and I’ve accepted the offer; we’re moving forward to Saudi Arabia; I’ve signed an agreement already for this fight. You’ve told me that I wouldn’t have to fight Deontay Wilder. Now it’s come out that you could have terminated that agreement from December, but you didn’t. So quite frankly, you’ve got me sixty million bucks and an opportunity to fight for the undisputed championship in the biggest fight in history.’

That’s what you say to people that work for you. Because if I had done that and it was the other way around, I would expect AJ to phone me up and give me a double bollicking.

“If it were me, I would have tried to do the step aside myself. I would have found out the number that gets this done. I reckon Deontay Wilder will make between 12 and 15 million dollars to fight Tyson Fury in the summer,” said Hearn.

Team Fury may believe that Wilder will be the equivalent of a tune-up to help the ‘Gypsy King’ prepare for AJ.

It’s an extra $20 million payday for Fury before he takes the arguably tougher fight against Joshua in the fall. You can give Fury’s management a free pass if they view it in those terms because he needs a warm-up fight, and Wilder has proven to be woefully bad in his two fights with Tyson.

Eddie believes Deontay would have accepted a deal

“There’s a number, trust me when I say there’s a number [for a step aside that Wilder would have agreed on]. We could have looked at Fury fights AJ, and the winner fights Wilder. 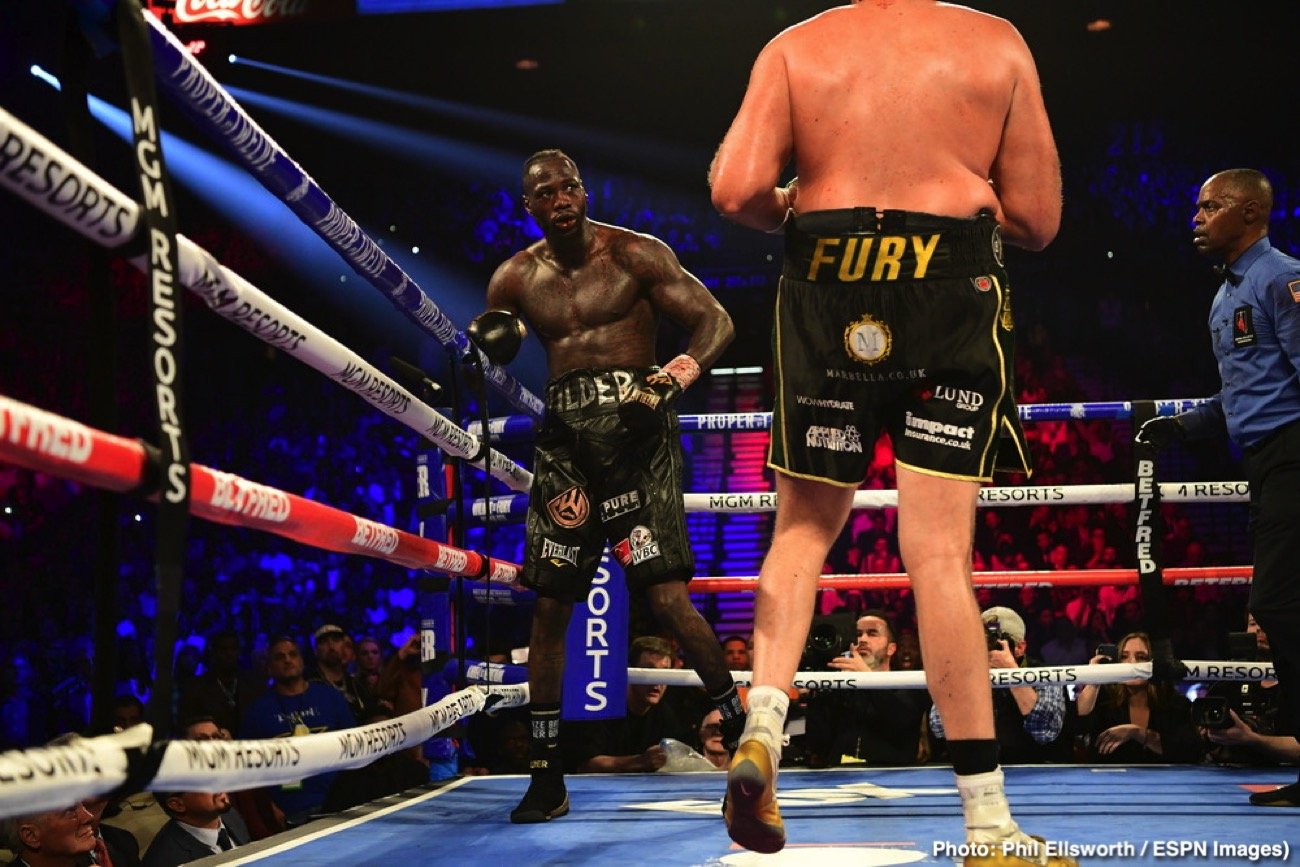 “We could have looked at that, but there’s always a number. So the first thing you do is find a [step aside] number, and once you have the number, then you go to work.

“Call the number, twenty million dollars. Fury is now going to make $20 million to fight Deontay Wilder in the summer. That’s about $60 million less than what he would have made [had he fought Anthony Joshua on August 14th].

“So even if he gave him [Wilder] 20 [million for step aside], he’s making 40 million more. Even if you go around with your begging paw to raise that kind of money to get this deal over the line, I would have done it all.

“But there was no interest [from Team Fury] to make this fight. Would AJ have given up some of his purse for a Wilder step aside? I don’t know; we were never asked. We were expected to be asked. Would Saudi have paid more for a step aside?

It’s hard to ask a fighter and his promoters to give away $20 million for a step aside, so that probably never going to happen.

If this were Joshua we were talking about, he’s someone that might entertain the idea of giving away a huge step aside. Fury has shown interest in giving Wilder a step aside from day one, dating back to last year.

“What it comes down to is whether they ever wanted the fight?” said Hearn. Did “they want us to succeed? We couldn’t have done anymore to make this fight.

“I did everything, but I can’t control the actions of another team. I don’t know what to think anymore because I don’t trust them.

“In a normal world with normal people, I believe that fight gets done with the deal that was on the table. I can’t tell you what they’re going to do now.

“I saw Tyson Fury on ESPN, happy as Larry that he’s got the Deontay Wilder fight. ‘Yeah, I’m going to do this, and then I’m going to fight AJ in December. Yeah, all done.’ I can’t trust them.

“Again, maybe there’s some naivety with me thinking that I’m dealing with the same kind of people because we’re not. I can’t even say we’re going to fight in December.

“Who knows what they’re going to do? Saudis Prince Khalid was absolutely devastated. He may have done as much work on this as me to get this over the line.

“I feel gutted for them because they made the commitment, and they already made plans to build a stadium. At no point did I ever feel this fight wasn’t going to happen.

“The question now is there a way to do this fight in December? The feeling from our camp is, ‘They [Team Fury] have absolutely no interest in this fight.]

“We would absolutely love to fight Tyson Fury or Deontay Wilder. The option now is to reset. We’ve got three or four options now, and we’ve got to figure out what to do,” said Hearn.

Obviously, Team Fury wanted the Joshua fight, but they clearly believed that they would win the arbitration case with Wilder.

Hearn was told Fury-Wilder arbitration wouldn’t be a problem

“It’s very unusual for an arbitrator to rule a rematch with a set date, and this is why I think the whole thing sticks, by the way,” said Hearn.

“When you’re told consistently by Tyson Fury’s team that the arbitration would have no effect on the AJ against the Tyson Fury fight and we can’t get any access to that arbitration case because of confidentiality.

“Tyson Fury came out and acknowledged the fight was on. Did he think they were going to order the rematch? Bob Arum certainly didn’t.

“This thing has taken me five months to get this thing [Joshua vs. Fury] over the line. We were told this was not going to be an issue.

“If it was, Top Rank could have told me, ‘Listen, we can do the deal, but we have to wait for the arbitration ruling.’

“If they had said that, we might not have taken the fight [with Fury]. When they signed a contract for the Fury fight with ongoing arbitration, you have to think they’re quite confident they’re going to be OK.

“Maybe I was too naive to believe these people that are experts that it wouldn’t be a problem,” said Hearn.

In hindsight, Hearn should have held back from negotiating a fight between Joshua and Fury until after the arbitration case was done. With something like hanging over Fury’s head from last year, it would have been wise for Hearn to take a cautious wait-and-see approach before attempting to negotiate.

This whole episode played out in an amateurish way, making everyone look bad, not just Team Fury. You can argue that Hearn was too trusting of what was being told to him from Fury’s team about the arbitration case.

Who should Yordenis Ugas fight next? »