Canelo reacts to Fury saying Saunders will school him on Saturday 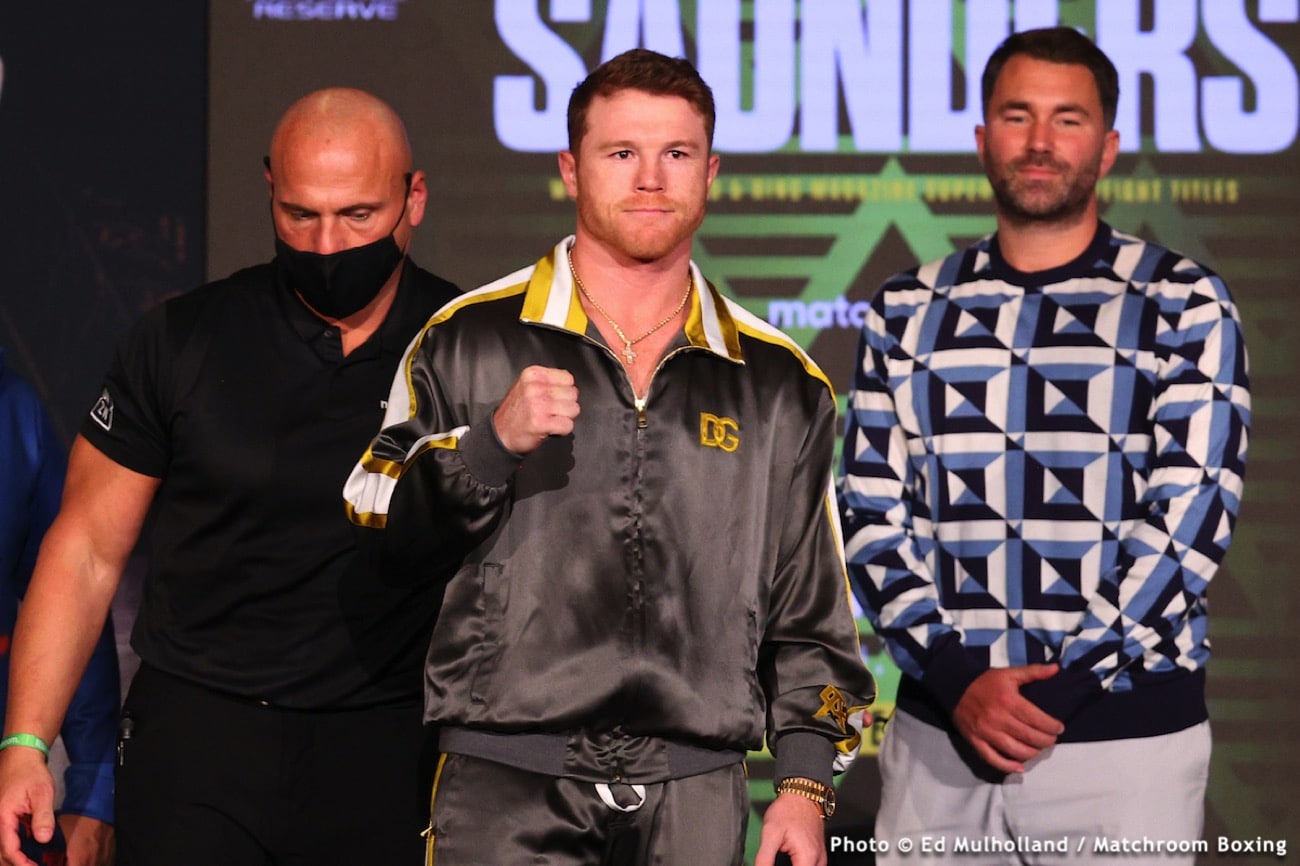 Fury says Saunders will be giving WBA/WBO super middleweight champion Canelo (55-1-2, 37 KOs) a “boxing lesson.” Further, Saunders will knock Canelo out in the 11th or 12th, according to ‘The Gypsy King.’

Canelo says the reality is, he’s going to go out and show that the WBO 168-lb belt-holder Saunder (30-0, 14 KOs) doesn’t exist on the same level as him talent-wise.

Moreover, Alvarez says he wants to punish Saunders a little more for all the lip he’s given him about this and that during the build-up to their unification fight on Saturday at the AT&T Stadium in Arlington, Texas.

As far as the ring size issue that Saunders and Fury have been crying about, Canelo says it could be a “30-foot” ring, and it still won’t matter. Saunders has been making a lot of noise about his need for a 22-foot ring.

Canelo says he’ll give Saunders the entire AT&T Stadium as a ring for him to run around in on Saturday if that’s what he wants.

Fury sounds off on Canelo vs. Saunders

“I’m confident that he’s going to smash [Canelo] 100%,” said Tyson Fury in predicting a win for Saunders. “I think he’s going to give him a boxing lesson and smash him and stop him in round 11 or 12.

“I’m really confident, honestly. I’ve never been as confident as I have in anything in my life. Billy is going to hit him with a jab, beat him with a jab straight in the mouth every time.

“You’re going to see something really special,” said Fury about his view of the Canelo vs. Saunders fights.

As you can see, Fury is totally invested mentally in his fellow British countryman winning the fight against Alvarez. Hopefully, Fury doesn’t go to pieces on Saturday if things don’t work out for Billy Joe.

Gilfoid would hate to see Fury blubbering in the stands as he watches the spectacle inside the ring.

“Yeah, I’ve seen it,” said Canelo to DAZN’s Boxing Show about Fury’s views about his fight with Billy Joe. “But we’ll see what happens on Saturday night.

“What I can tell you is that Saunders is fighting on another level, that’s the only thing I could say. Come Saturday, he’s going to feel it,” said Canelo in giving a warning of what’s in store for Saunders.

“I take it in stride, but, yes, it has motivated me to hit him a bit more, with the right mentality and not lose my focus,” said Alvarez about whether he’s annoyed with Billy Joe enough to want to punish him. “It does motivate me to punch him some more.”

“I’m sure he’s never fought in a ring 24-feet wide,” said Canelo about Saunders. “He’s never done that, I can assure you of that.

“He wants that now, but he’s never had that before. The truth is, I’m not losing sleep over the situation with the ring.

“If he wants a 30-foot ring, I can give him the entire AT&T Stadium, knock yourself out,” said Canelo.

Gilfoid believes what Canelo says about him being willing to give Saunders a 30-foot ring if that what he wants. Alvarez knows it’s not going to help Billy Joe, but it’s interesting to see how the unbeaten WBO belt-holder reveals how scared he is by asking for a monstrous-sized ring for him to run from the battlefield.  So much fear in this one.