By Matt Lieberman: Highly ranked 154-lb contender Tim Tszyu has an offer of $1 million to stick around in Australia and face middleweight Michael Zerafa for his next fight.

It’s a fight that is arguably a step backward for the 26-year-old Tszyu, the son of former 140-lb champion Kostya Tszyu, from his last contest against two-time former world title challenger Dennis Hogan last Wednesday.

Tim looked impressive in chopping the crafty Hogan down in five rounds in an impressive stoppage in Newcastle.

The body shots and uppercuts that Tszyu was hitting Hogan with were devastating. There was no way that the Irish fighter could withstand those shots without quickly getting taken out.

Tszyu has better options than fighting Zerafa, who was beaten by former WBO welterweight champion Jeff Horn by a 10 round majority decision in December 2019 in their rematch in Brisbane, Australia.

Zerafa beat Horn by a ninth-round knockout in their first fight in August 2019. In Zerafa’s last fight, he defeated 45-year-old former super middleweight champion Anthony Mundine by a first-round knockout on March 13th.

NEWS:   Tony Harrison says Tim Tszyu was put in his spot by money-people

“Tim is a quality fighter but he just fought a 36-year-old fighter who was coming off a brutal knockout and his second loss in a row,” said promoter Brian Amatruda via News.com.au. 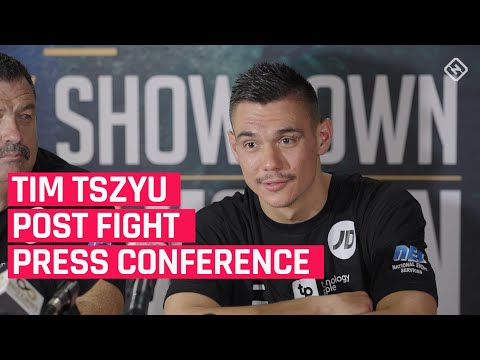 “Hogan also had a major injury coming into the fight and at one stage was going to withdraw.

“No discredit to Tim, but he has never fought the likes of Michael Zerafa who is in his prime and fought the best in the world. Why not fight the very best in Australia?

“If Tim thinks he is on a different level then let’s get the fight on and he can have an easy payday!”

It’s got to be tempting for Tszyu to accept the $1 million offer to fight Zerafa, as it would seem to be easy money. Zerafa is not in the same league as Tszyu talent-wise, and the fight would be more about publicity in his home country.

Sticking around in Australia for another fight won’t hinder Tszyu’s future, but it’s quite likely that he’ll continue to receive offers even after he beats Zerafa to stay inside the country.

If Tszyu is serious about wanting to take advantage of his #1 ranking with the World Boxing Organization to challenge 154-lb champion, Brian Castano, he’ll need to start fighting better opposition to prepare him.

It’s fair to say that Tszyu’s last opponent Hogan was nowhere near the level of Castano, and not much help in readying him for a title challenge in 2021 or 2022.

For Tszyu to keep improving, he’s got to take on these types of junior middleweights rather than Zerafa:

If Tszyu is incapable of beating those contenders, there’s no point in him challenging WBO champion Castano because he’ll surely lose. That’s why it’s a waste of time for Tszyu to fight Zerafa, seeing that it’s not going to help him raise his game.

“My dream fight would be against GGG,” Tszyu told news.com.au last week.

“He’s been my idol for the last five, six years. At one stage I idolized him and then at another stage I said ‘you know what, that would be a fight I’d love to take one day.'”

Tszyu isn’t ready for IBF middleweight champion Gennadiy Golovkin (41-1-1, 36 KOs) right now. If that fight is going to happen, it’s going to need to take place two or three years, and it’s unclear whether GGG will still be fighting at that point.


« Bernard Hopkins: Golovkin and Munguia are on a collision course

Khan worried for Conor Benn ahead of Samuel Vargas fight »