The 48-year-old De La Hoya (39-6, 30 KOs) is taking his exhibition fight on Triller pay-per-view seriously and is looking to get in the best shape of his life for the event.

De La Hoya has got to lose some weight and sharpen his game because he hasn’t fought since 2008. In looking at De La Hoya’s workout, he still has excellent hand speed and the same desire to work hard that he had when he was younger.  He just needs to take off 20 to 30 lbs and make sure he’s in the best possible shape.

If De La Hoya were interested in fighting a former boxer, it would be easier to find a suitable opponent because there massive numbers of fighters that would fight him.

Oscar still needs a big-name opponent from the boxing or MMA world to share the ring with him. 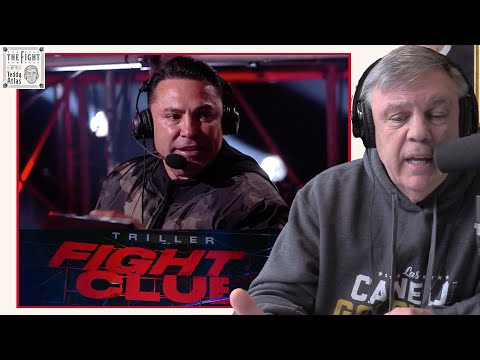 Alvarez says the MMA is his realm, and that if De La Hoya wants a fight, that’s a real fight. De La Hoya probably won’t bite on the offer from Alvarez because he can easily find other fighters from the sport that will be interested in facing him in a boxing match.

“I felt uncomfortable when I was watching Oscar,” said Teddy Atlas on his Youtube channel in talking about De La Hoya’s behavior as a commentator during the April 17th Triller PPV broadcast. “I didn’t want to be part of the laughing at his expense.

“I felt like this was no place for that, and it was serious. Laughing at a guy [De La Hoya] that is lost. It’s unfortunate that there’s no one around him that can give him better advice that can steer him in the right direction.

“That’s part of it,” said Atlas in talking about somebody should have stepped in to prevent De La Hoya from going on TV in the condition he was in during the Triller broadcast.

With De La Hoya nearing 49, he’s a little old to be learning how to roll around on the mat with life-long wrestlers, and fighters that have been trained to kick and use submission holds for years.

I’ve yet to see a boxer come and do that in the MMA realm. It kind of bothers me and put me off. I’d like to see the courage on the boxers side to step inside the MMA realm. I felt like when we were saying, ‘yes,’ to the Oscar [De La Hoya] thing, I felt like maybe I was making a decision too quickly.

“I feel like this is my sport, and this is what I’ve done my whole life. If you want a real fight, this is a fight. MMA is a fight,” said Alvarez in backing down from a fight with De La Hoya.