Conor Benn: I want to send Amir Khan into retirement

By Allan Fox: Conor Benn says he wants to fight Amir Khan next so that he can send him into “retirement nicely” if he’s willing to take the fight. Benn (18-0, 12 KOs) wants to add the former IBF/WBA light-welterweight champion Khan’s name to his resume, and he believes it’s a fight that can be made.

Conor needs a high-profile opponent for his next fight, which his promoter Eddie Hearn plans on putting on Sky Box Office PPV.

Benn, 24, maintains the money that Khan can make fighting him will convince him to agree to take the match. Thus far, Khan is sounding dismissive of the idea of fighting the young talent, saying on social media that he doesn’t have a world title belt.

Vargas found himself under a swarm of punches from Benn in the opening seconds and made the wrong tactical move in retreating to the ropes. From there, the volume puncher Benn landed nonstop punches until the referee was forced to stop the fight.

“I went in, and I done what I had to do,” said Benn to Sky Sports moments after his win over Vargas. “I’ll be surprised if either of them takes it because if that were me, I wouldn’t want to take on a young, ferocious, dangerous fighter.

Not really, no,” said Benn when asked if he believes Kell Brook or Amir Khan will agree to fight him. But then again, money talks.

“I’d rather [fight] Amir. Me and Kell talked. We spoke tonight about what was going to happen. Kell is different. Khan is someone I’ve looked up to and achieved everything I’ve wanted to achieve in the sport, but I’d like to beat him and get his experience. I want to send him into retirement nicely. As nice as possible, anyway.

“Without question,” Benn said when asked if he believes he can knock out Khan. “I’m only getting stronger, and it’s proven I’m getting stronger. I just got to land one in 12 rounds. As soon as I smell blood, he ain’t going nowhere,” said Benn.

Hearn will talk to Khan and let him know what kind of money he can make fighting Benn, and obviously, he’ll compare it to what he can make facing Brook.

If it turns out the money is better for Khan to be fighting Benn, that could be the direction he goes in. Khan is practical. He’s not going to take a lower-paying fight if there’s one that will give him a lot more money.

Benn might be one or two fights away from being in a position where Khan or any popular fighter can make excellent fighting him.

“Without question,” said Benn when asked if he thinks he can become a world champion. I’ve had to work really hard to where I am now, and this is only the beginning.

“It was all fun and games at first,” said Benn when asked if he thought he would get as far as he was now when he started boxing. “I thought I was training hard, but I’m willing to put the work in,” said Conor.

To get to a position where Benn can win a world title, he’ll need to keep progressing and not get stuck fighting older fighters like Khan. There are guys that Benn can learn from that will give him more of a test than Khan right now.

David Avanesyan is a good test, but that would be a tough one for Benn to take. Conor needs to forget about Josh Kelly because he’s not going to get anything from that fight in terms of development.

“No one has ever done what I’ve done to him,” said Conor about his win over Samuel Vargas. I beat Formella at his game. I outboxed a boxer, and I out-fought a fighter tonight, and he was ready.

“He was in unbelievable shape. I put the welterweight division on notice when I beat Formella, a former IBO world champion. If people don’t want to pay attention soon, they won’t have any choice.

“I  said ‘I wouldn’t be surprised if I knocked him out in the first round.’ You know why? Because I have faith in my ability and faith in my team.

While some boxing fans say that whatever Vargas had left was beaten out of him in his previous fight against Vergil Ortiz Jr, it’s to deny what Benn did was special. 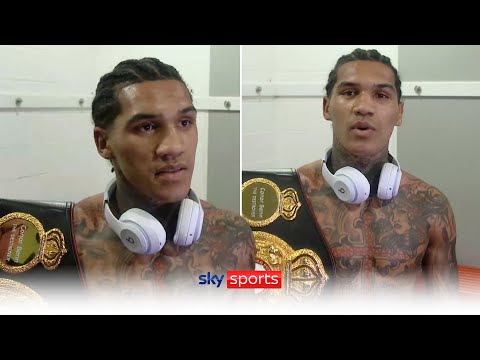