In the seventh round, a fight broke out! Then suddenly, the referee deducted a point from Diaz for a kidney punch. In the final minute, Navarette drew blood from the nose of Diaz. In the eighth round, a flurry of punches from Navarette on the chin of Diaz dropped him for an 8-count. Another flurry of body punches dropped a battered Diaz for an 8-count near the end of the round.

In the tenth round, Navarette continued outworking Diaz. In the eleventh round, Diaz was bleeding from the nose and mouth but coming forward throwing punches like in no previous round. In the twelfth and final round, at the halfway point, Diaz rocked Navarette with a right cross on the chin.

In the final minute, a flurry of punches from Navarrate dropped Diaz with a chopping right on the head. The corner threw in the towel ending the fight.

In the first round, Shaw hurt Vargas with a right on the chin in the first thirty seconds. By the end of the round, Vargas was back in control. In the second through the seventh rounds, it was all Vargas outworking Shaw.

In the eighth, Vargas continued outworking a tired Shaw, hurting him to the body midway through the round. In the tenth and final round, a tireless Vargas continued beating Shaw to the punch.
Scores were 98-92 and 99-91, twice as this writer had it.

In the first round, Nicholson used an effective jab to stop the 16 straight first-round kayo streak of Berlanga. In the second round, a left hook from Berlanga on the chin of Nicholson and down he went for an 8-count from referee A. Lombardi.

He managed to get through the round, mostly holding on. In the third round, Berlanga landed a double left on the back and back of the head of Nicholson, dropping him for an 8-count. In the fourth round, in the final seconds, Belanga landed a left hook to the chin, rocking Nicholson.

In the fifth round, Berlanga pushed Nicholson down, with referee Lombardi ruling it a knockdown. The final punch of the round, a right from Berlanga on the chin, stunned Nicholson.

In the first round, it was all Ortiz. In the second round, Adorno hurt Ortiz badly thirty seconds into the round, with Ortiz holding on. A minute left in the round and left from Adorno on the head dropped Ortiz for an 8-count by referee A. Lombardi.

Ortiz’s nose was bleeding. In the third round, Ortiz came back, overwhelming Adorno in the first minute, and continued to outwork him again in the fourth though bleeding heavily from the nose.

In the fifth round, Ortiz, though also bleeding from the mouth out, landed Adorno for the most part. In the sixth, Adorno may have pulled out the round with a strong finish. In the seventh round, at the halfway point, a left from Adorno on the chin put Ortiz halfway through the ropes for an 8-count from referee Lombardi.

Adorno may have punched himself out. In the eighth and final round, it was all Ortiz with many uppercuts landed on the chin of Adorno, who seemed near exhaustion at the end.

In the first two rounds, Lopez had an edge. In the third round, Gonzalez got the attention of Lopez with a right hook on the chin halfway through the round. In the fourth round in the final thirty seconds, a counter left from Gonzalez on the chin of Lopez rocked him.

In the first round, Zayas hurt Layton, who came back, putting Zayas back several steps. Zayas immediately went back at Layton, landing a right to the body followed by a left to the chin, and down went Layton for the 8-count. Upon rising, the fight was waved off.

In the second round, each boxer landed right hooks to the jaw at the same time. In the third round, Adorno hurt Martinez halfway through the round, driving him into the ropes with a combination.

In the fourth and final round, Martinez landed a left to the chin of Adorno, driving him back several steps. Adorno would come back and outwork Martinez the rest of the way. In the end, Martinez had a bruise under his left eye.

In the first round, Gomez landed a right to the head and body of Villegas, and down he went for an 8-count by referee Sammy Burgos a minute into the round. Gomez again dropped Villegas in the final minute with a pair of rights to the side of the head of Villegas, forcing the referee to call a halt. 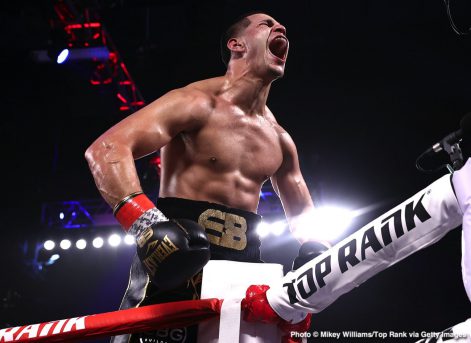 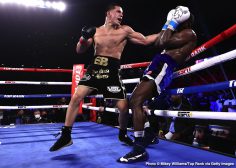 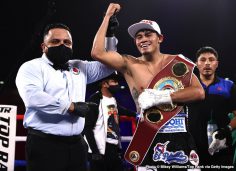 KISSIMMEE, FLORIDA – APRIL 24: Emanuel Navarrete is victorious as he defeats Christopher Diaz for the WBO featherweight title at the Silver Spurs Arena on April 24, 2021 in Kissimmee, Florida. (Photo by Mikey Williams/Top Rank Inc via Getty Images) 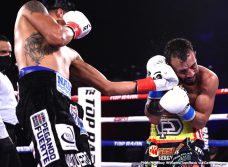 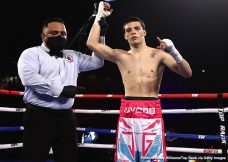 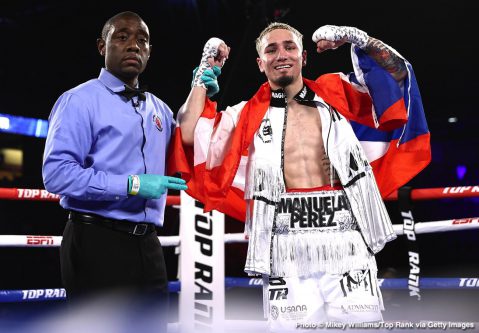 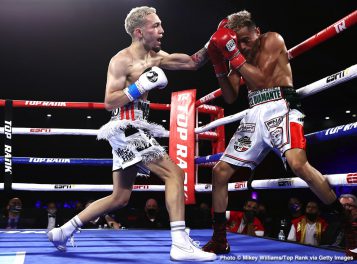 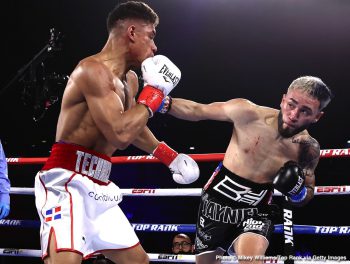 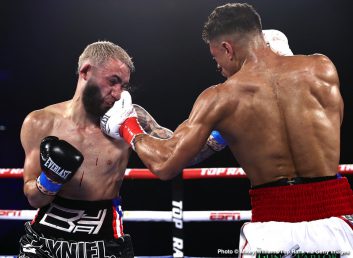 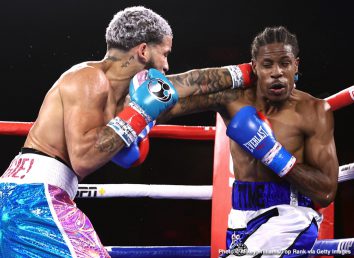 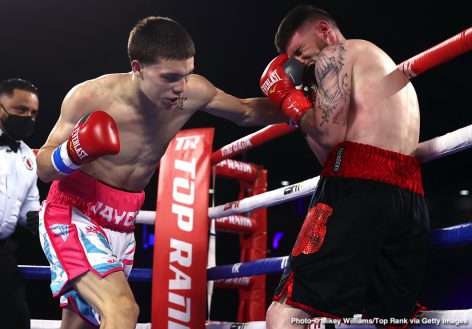 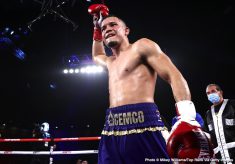 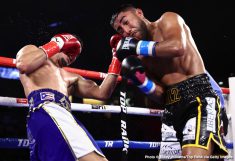 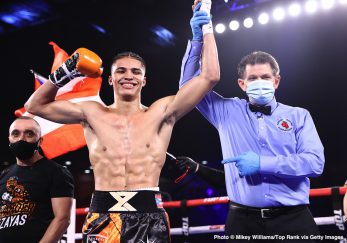 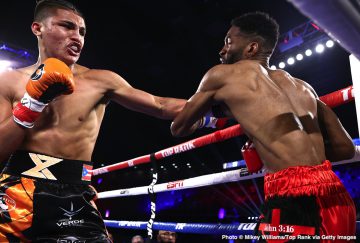