By Dan Ambrose: Chris Arreola doesn’t believe Canelo Alvarez can teach an “old dog” Andy Ruiz Jr new tricks to improve him enough to where he can’t defeat him on May 1st in their fight on Fox Sports PBC pay-per-view.

Arreola (38-6-1, 33 KOs) has whipped himself into superb shape, looking thinner than he has in ages for this important fight. Although Ruiz (33-2, 22 KOs) has lost a lot of weight, too, he has the appearance of someone that took too much off.

We’re going to see which of these two sometimes plump heavyweights has their weight right and can fight at a high level.

Ruiz and Arreola will be headlining at the Dignity Health Sports Park in Carson, California. The management for Ruiz has picked out the 40-year-old Arreola hoping that he has just enough left in the tank to put in a good fight but not enough to win.

Ruiz, 31, is fighting for the first time since losing his IBF, WBA, and WBO heavyweight titles to Anthony Joshua in December 2019.

It’s taken Ruiz a lot of time to return to the ring finally, but he’s slowed down by the pandemic and the need to lose pounds.

“I’m blessed to have gone through so many chapters in boxing,” said Arreola to Fighthype. “I’m a fortunate dude. I’ve always said that I’ll let my fortitude do my talking.

“I just keep working, and I don’t stop because I love what I do. I thank Andy for giving me the opportunity to showcase my skills again. It should be a fun fight.

“There are some that do give me the credit and others that just talk s***. I know what I’ve done, and I worked hard in every fight.

“They want me to box, but it’s hard for me to box when I want to fight. I said that this hasn’t been fight camp. This has been straight boxing, training hard every day, three hours a day.

“I’m here, and then I work out another hour and a half at home. Right now, I’m walking about in the mid 230s or somewhere around there. The thing is, I really don’t give a f*** what I weigh.

“All I care about is going to war with Andy and being able to go all 12 rounds, and giving the fans a great fight. That’s all I’m worried about.

“Back in the day, I cared too much about my weight, and I neglected my boxing part. Now it’s all about boxing,” said Arreola.

It’s a bit of a shock to see how thin Arreola is right now, and he has the appearance of someone that lost muscle weight. That’s not a good thing.

Arreola is likely hoping that he can duplicate his feat in throwing over 1,000 punches in his last fight against Adam Kownacki. If Arreola can do that against Ruiz, he’s got a chance to win.

When you look at how big and muscular Arreola looked when he weighed 251 lbs for his fight against former WBC champion Vitali Klitschko in 2009, it makes you wonder.

“He [Ruiz] looks great, and that motivates me to work harder because I know he’s a motivated fighter, and he’s someone that I have to fight,” said Arreola.

“Obviously, I better come in the best shape that I can to be able to withstand his stamina and skills.

“So this should be a great barnburner for the fans. It’s going to be me vs. him. Canelo can’t come in the ring. Canelo can teach him all he can, but can he teach an old dog new tricks?

“I’m sure he’ll pick some things up, which calls for a great fight, a fan-friendly fight. He [Ruiz] is fortunate to have someone like Canelo.

“He’s someone that has been there and done that, and he is teaching him a lot. Again, come fight time, it’s just me and Andy and no Canelo. Canelo can be outside watching.

“It’s hard for a man that has nothing to have everything just like that. Think about it. Let’s just say that anyone that is making 40,000 a year, and then all of a sudden, here’ ten million.

“How are you going to act? I don’t hold anything of that against him. It’s human nature, man, and it’s tough. This is his comeback,” Arreola said.

Arreola wants to turn Ruiz into a Buster Douglas

“Let’s see what he [Ruiz] has, and I’m working hard to turn him into a Buster Douglas,” said Arreola. “I don’t go by numbers, but I just say this. It’s going to be a great fight, and it’s going to be a fun fight.

“So it should be a great boxing night, a great boxing event on pay-per-view. After he [Ruiz] won the fight, I just said, ‘Congratulations and everything like that.

“I’m not a hater. He deserved everything he got. And he deserved that title, and he did something that I didn’t do.

“My respect went out to him and his team at the time that he won the title. He was fat, but who cares? He did exactly what he was supposed to do, and he was in the best boxing condition.

“Not that he was a bodybuilder, but he was in the best boxing condition,” said Arreola of Ruiz.

We’ve already seen that Ruiz is a Buster Douglas with the way he lost his titles immediately in his rematch with Joshua. The only thing Arreola can do is finish Ruiz’s career with the way that Evander Holyfield finished Douglas’career. 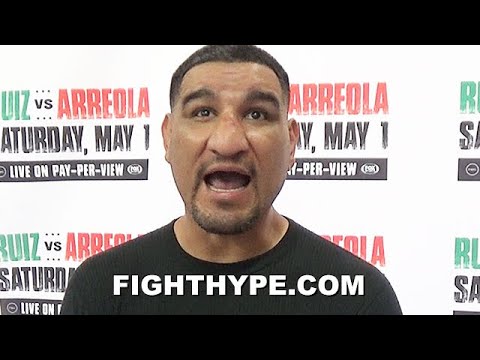