Tyson Fury: I am like bionic action warrior, I can’t be beat

By Charles Brun: Tyson Fury seems to be trying to give himself a boost by comparing himself to a bionic action warrior as he heads into a unification fight against Anthony Joshua in June.

Despite coming off the biggest win of his career 13 months ago against Deontay Wilder, fans are writing Fury off against Joshua due to his inactivity.

It’s the way that Fury has slacked off and let his physique go and gotten fat once again. He’s put on weight, and he looks like he’s aged five years in the last year alone.

Fans have noticed that Fury has aged since his last fight against Wilder, and you have to wonder if he’s been living it up a little too much in celebrating his victory. Whatever Fury is doing that is accelerating his aging, he needs to back off because there is no going back.

There is no fountain of youth for fighters that lose their youth overnight due to hard living.

Whatever Fury has accomplished in the past is meaningless. He physically doesn’t look like the same person he was when he fought Wilder twice, Otto Wallin and Tom Schwarz.

Fury searching for someone to beat him

“See, if I am looking for a challenge, I have been looking, searching the world for 13 years, a professional to find a man who can better me,” said Fury to iFL TV.

“And I just can’t find him. Even if I go away, I still can’t be beat. I am like the bionic action warrior. I can’t be beaten,” said Fury.

Well, Fury essentially has been beaten already by Wilder in their first fight. Although that contest was scored a 12 round draw, Fury should have been knocked out in the 12th.

Wilder dropped Fury hard, sending him to the canvas where he laid unconscious. Most referees would have stopped the fight on the spot, but for some reason, this one didn’t.

He gave a count while lying there unconscious. How often do you see that? If Wilder was dropped in the same way, would there have been a count, or would the referee have stopped the fight?

We’ll never know. You can say that Fury should have been knocked out in that fight, and he also should have been stopped in his match against Otto Wallin in 2019 after he was cut badly in the third.

“I won’t say two weeks because I don’t think it’ll be that long. Hopefully, we can drop some news to you soon,” said Hearn to AK & Barak Show about the negotiations almost being done for the Joshua vs. Fury fight.

“That process has been going on for two weeks now [choosing venue]. We’ve agreed to terms, so now we’re moving forward with the venue.

“First thing, we want to see some pen on paper. Right now, I’d say Las Vegas, Singapore is a frontrunner right now, and the Middle East.

“Those talks are a little more advanced now than they were a couple of weeks ago. We’re in March. We want to tie this fight up by the end of June,” said Hearn. 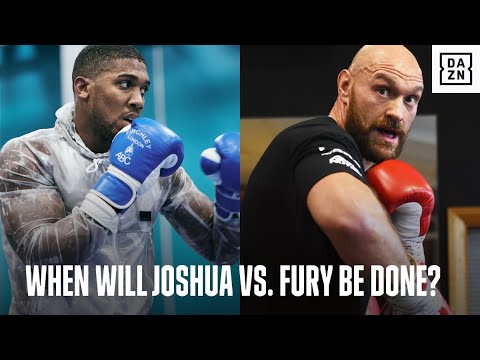 Liam Smith battles Magomed Kurbanov on May 8th in Russia »