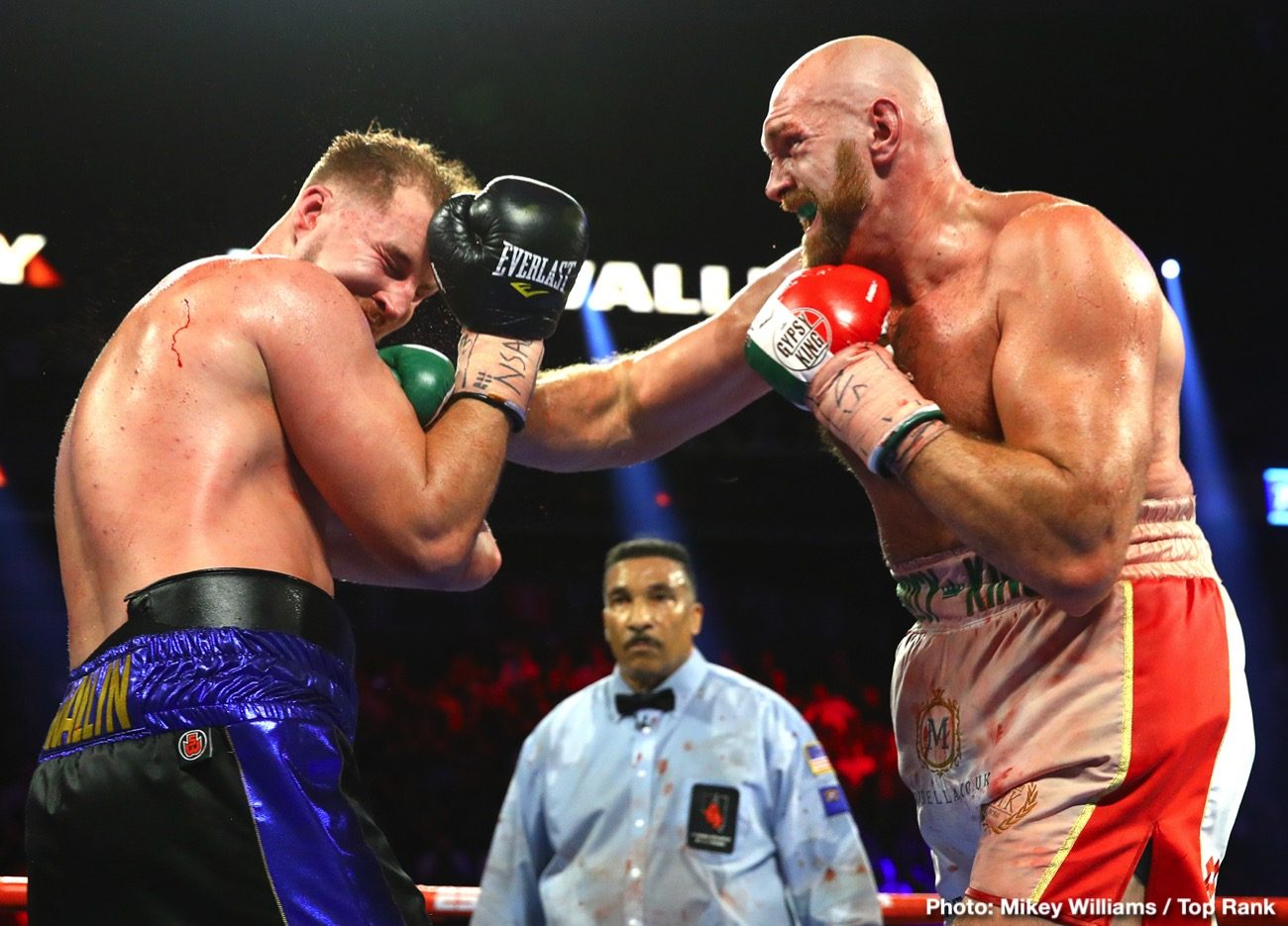 By Charles Brun: The big 6’6″ Swedish heavyweight Otto Wallin is picking Tyson Fury to defeat Anthony Joshua in their long-awaited undisputed clash in June. It’s unclear whether Wallin is siding with Fury because he lost to him in 2019 or if he truly believes he can beat Joshua.

What Wallin isn’t saying is what Fury will use to try and beat Joshua. Fury won’t surprise Joshua by fighting aggressively as he did against Deontay Wilder because he’ll be ready for that approach.

It would also be a bad idea for Fury to try and brawl with Joshua because he’s got the size, speed, and power to take him out quickly if he elects to use that approach.

While it worked for Fury to go toe-to-toe with former WBC heavyweight champion Deontay Wilder in their rematch last year, it won’t be a smart move for him to recycle that same game plan against AJ.

Interestingly, Wallin doesn’t see WBC champion Fury’s inactivity issues as a problem for him going into the fight AJ.

Fury, 32, will have been out of the ring for 18 months by the time he faces Joshua in June, but Wallin doesn’t think that’ll bother the ‘Gypsy King’ on the night.

Fury’s inactivity won’t be a problem

“That’s good for Joshua, that’s really good,” said Wallin about Fury being inactive for 18 months by the time the two meet in June. 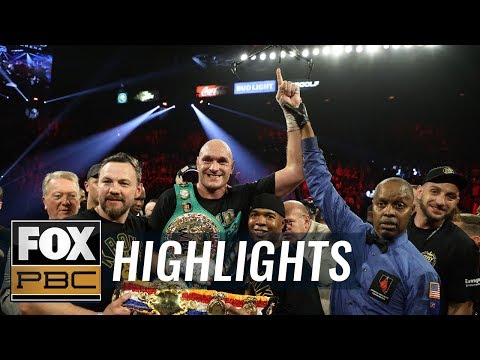 “At the same time, I think that with Fury, I’m not too worried about it for his sake. Of course, it would be good for him to have a couple of fights before that, but it probably won’t happen.

“Fury is a smart guy, and he’s been in boxing his whole life. He’s a fighting guy. He knows what he’s good at and who he is, so I’m pretty sure it won’t affect him too much.

“I think he’s a sharp guy, and I’m not too worried about it [the inactivity],” said Wallin about Fury.

“And so I think that’s going to be a problem for Joshua, and I think that Fury has good confidence, good momentum coming into the fight.

“So I think that he’s going to use that with Joshua. I can’t really see him taking him [Joshua] out early. Maybe down the stretch a little bit,” said Wallin.

You have to disagree with Wallin about his view of Fury’s 18 months of inactivity as being no big deal. It could be a huge deal if Joshua can push a fast pace and attack Fury’s soft midsection early.

The body shots from Joshua to Fury’s flabby pear-shaped body could wear him down like a battery.

Tyson was more aggressive against Wallin 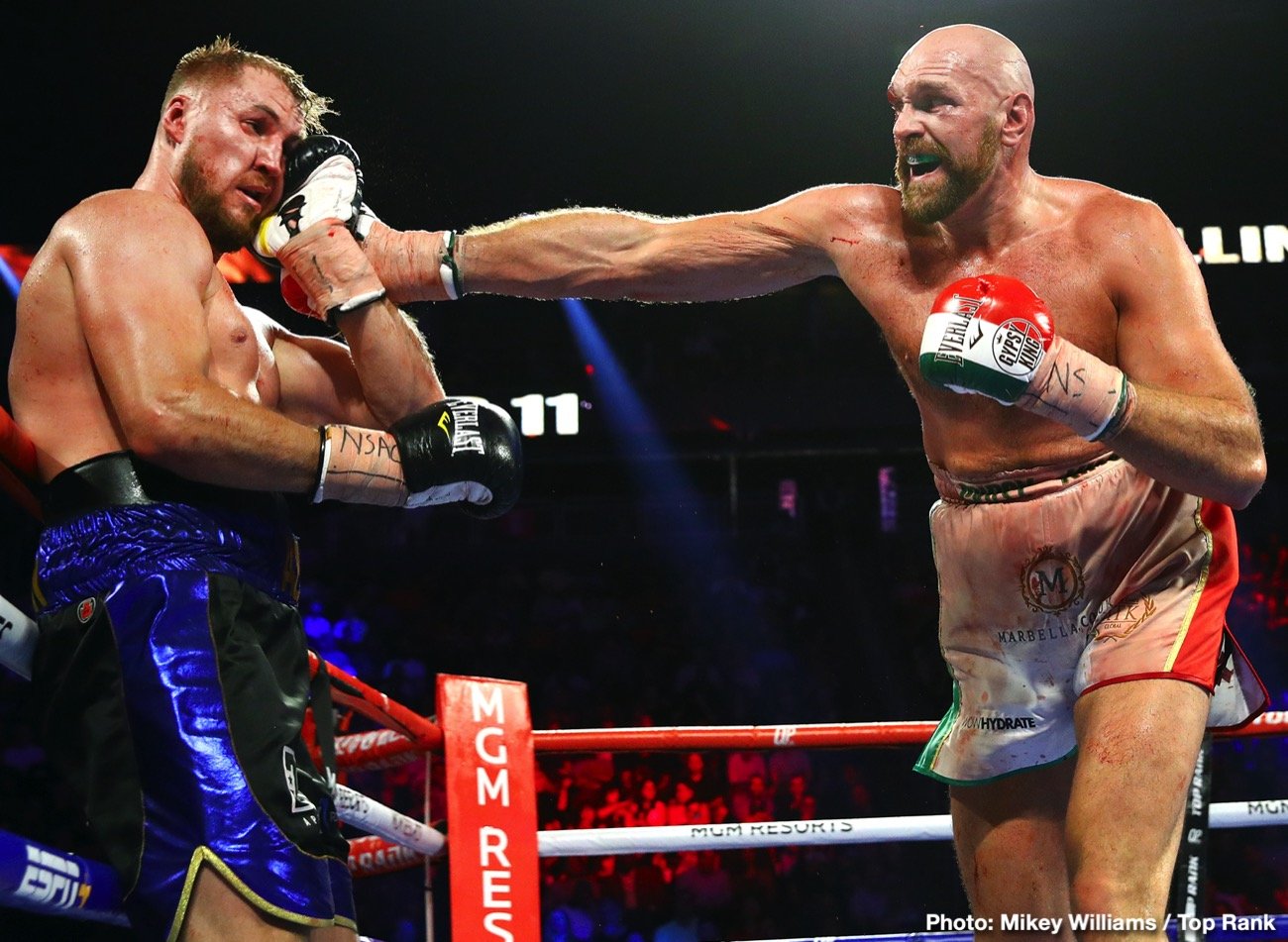 “I mean, he came out, he was very aggressive, and we haven’t seen that much. In our fight, he [Fury] was boxing in the first six rounds, and then he had a big cut.

“The doctor looked at it, and after that, he became very aggressive with me. So I think that came out of separation a little bit.

“He thought they were going to stop the fight, so he had to push me and knock me out. I mean, he did well when he was aggressive. I think that he might have done that a lot in sparring before, maybe not in fights so much.

“He felt like with me it was working, and then he had a switch of trainers. For the Wilder fight, it looked like that was their game plan. It worked perfect.

“So I think he probably had been doing that in sparring, I think, but not in fights so much.

“But then he came out in our fight because he was cut, and he had to do it. Then he felt like it was working, and then with Wilder, it was the perfect game plan, and he executed very good,” said Wallin about Fury.

Wallin’s lack of punching power enabled Fury to fight aggressively in a way that would have been insane if he were facing an opponent with major power like Joshua.

Moreover, Fury took advantage of Wallin’s lack of an inside game, which enabled him to smother his offense in the second half of the bout.

Fury tries to smother Joshua’s power in the same way by taking action to the inside; he’s going to eat a lot of uppercuts. Wladimir Klitschko discovered the hard way what happens when you try and maul Joshua.

As Wallin says, Fury was desperate and had no choice but to go to war with him after he was cut badly early on in the match. The fight would have likely been stopped, and Wallin, given the victory if Fury wasn’t a popular fighter.

Wallin rates Joshua as a harder puncher than Fury

“I think that Joshua is a good puncher and dangerous, and these are the two best heavyweights in the world,” said Wallin. “So I do think it’s going to be a good fight, but I do think Fury is a bigger guy; he’s awkward, he’s got a lot of different tools. 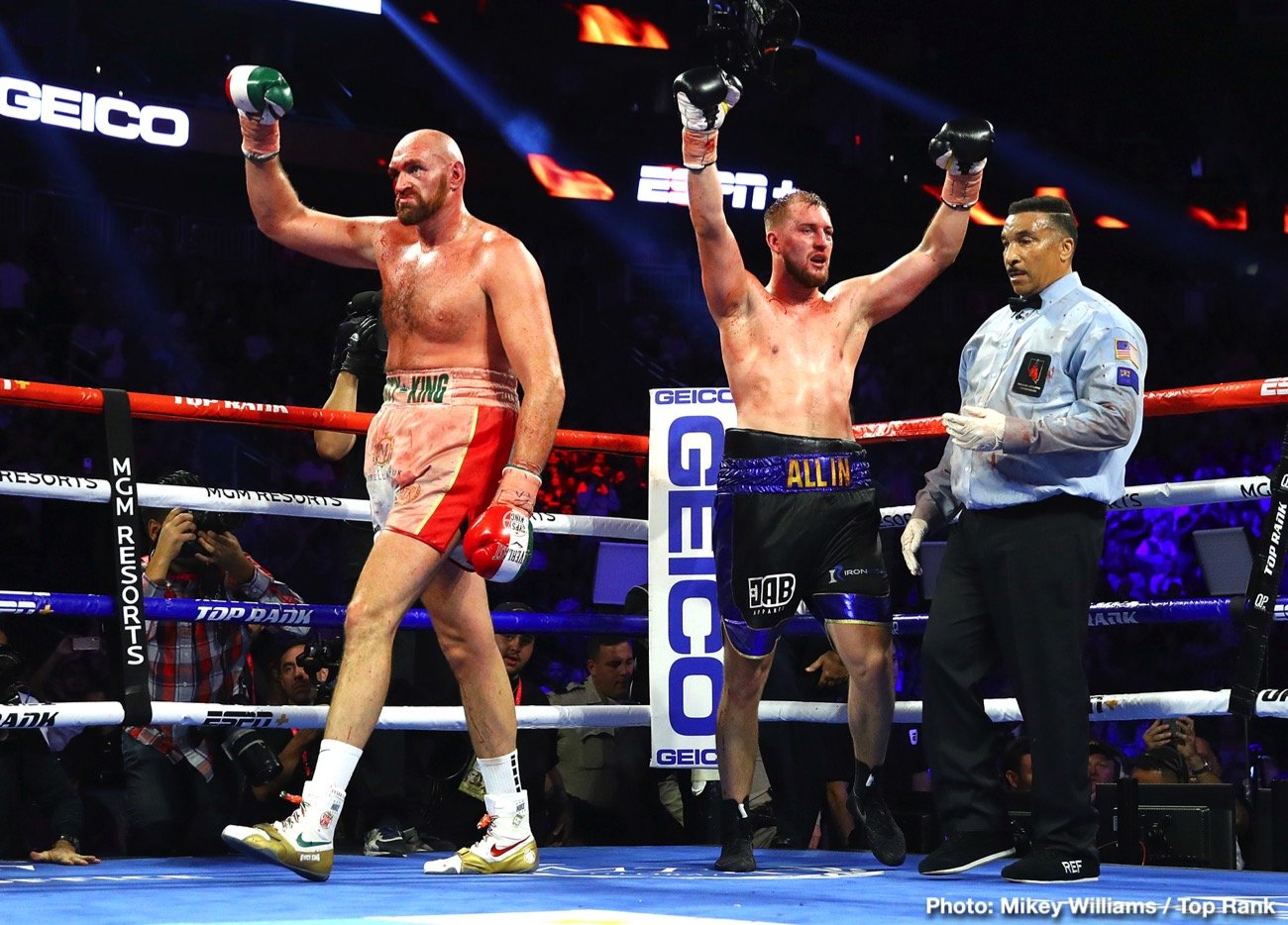 “I think Joshua punches harder. He has a lot of knockouts on his record, and Fury knocked out Wilder. I just think that Joshua has more power.

“He’s a solid puncher, and he’s not only a good puncher, but he’s fast, and he’s got good combinations.

“You would have to ask him, I’m not sure,” Wallin said when asked if Joshua was going 100% against him in sparring. We had really good sparring, and we had two amateur fights together also, and then all that sparring,” said Wallin.

It’s self-explanatory that Joshua hits harder than Fury. There are perhaps 15 to 20 heavyweights in the upper tier with more punching power and hand speed than Fury. They don’t have Fury’s huge 6’9″ height that he uses to get the better of his opponents and lean away from their shots.

It’ll be interesting to see what happens if Joshua elects to hit Fury in the breadbasket with shots all night. He’s there to be hit with body shots, as he’s leaning back and moving his upper body.

If Joshua follows the same game plan that journeyman Jerry Forrest used against Zhilei Zhang recently by attacking his body, he could wear Fury out and knock him out.