The 26-year-old Tszyu, the son of former light welterweight champion Kostya Tszyu, dropped the 36-year-old Hogan in the fifth round with a vicious left uppercut.

That punch was easily the best weapon that the young Tszyu had in his arsenal of punches tonight, as he was able to snap Hogan’s head back with that shot repeatedly from the fourth round.

Previous to that, Tszyu had been throwing many right hands to the head and body shots that didn’t do as much damage.

After #10 WBC Hogan got back up, Tszyu continued to batter him with heavy lefts to the body, uppercuts and looping right hands to the head until the Irish fighter’s corner threw in the towel to have the contest stopped. The time of the stoppage was at 2:29 of round five.

Tszyu had to deal with a cut over his left eye sustained in round two after he bumped heads with Hogan, but it wasn’t a bad enough injury to slow down his progress.

The loss for Hogan was his third straight since 2019. In his two previous fights, Hogan was stopped by WBC middleweight champion Jermall Charlo in the seventh round in December 2019 and beaten by former WBO 154-lb champion Jaime Munguia by a controversial 12 round majority decision in April 2019. 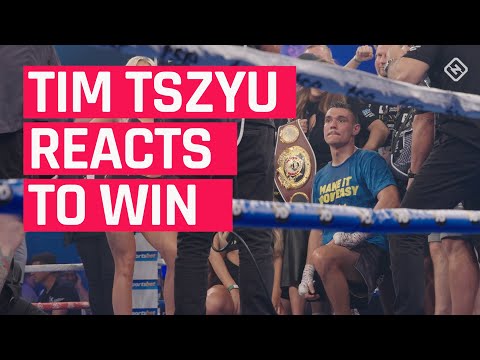 What’s unclear is why Tszyu’s management chose to match him against Hogan, a fighter that had lost his last two fights, rather than a contender that was doing better with their careers.

Perhaps a better choice for Tszyu would have been Liam Smith, Jack Culcay, Jarrett Hurd, or Bakhram Murtazaliev.

Those guys would have given Tszyu better preparation to be challenging WBO junior middleweight champion Brian Castano (17-0-1, 12 KOs).

Tszyu retained his WBO Global junior middleweight title with the win and, of course, his WBO #1, IBF #3, WBC #11 rankings.

Fighting like his famous father Kostya, Tszyu used a methodical approach to the fight, slowly walking the aging Australian residence Hogan. It was all power punches from Tszyu, unloaded on Hogan with everything he threw.

What was surprising is the British fighter’s toughness, as he took a truck-load of punishment until his corner did the right thing in pulling him out of the contest in the fifth.

Overall, it was a good performance by Tszyu, who showed power and a good punch variety. The only thing not to like was how Tszyu walked in using a straight-up stance without bending his knees. Tszyu’s father Kostya, fought with a wider stance and was better at getting out of the way of shots.

What we saw from Tim Tszyu was a guy that walking in, standing straight up, getting hit, and needing to get in close to land his shots.

Tszyu wasn’t throwing punches from the outside the way normal fighters do, which perhaps was due to his lack of hand speed. Tszyu looked on the slow side in the hand speed department, which made it necessary for him to get in close to land his heavy shots.

If Tszyu had attempted to throw his power shots from the outside, Hogan would have been able to see them coming and get out of the way.

It will be hard for Tszyu if he faces WBO 154-lb champion Brian Castano if he faces him in his next fight. Castano, 31, is better inside fighter, has a higher work rate, and much more experience than Tszyu.

The management for Tszyu should put him in with Hurd, Liam Smith, or Bakhram Murtazaliev to prepare him for what he’ll be dealing with when he eventually takes on Castano for his WBO belt.

If Tszyu fights Castano right now, he might not be ready for that level of fighter.