By Sean Jones: Andy Ruiz Jr has trimmed off a lot of weight, and he says he’s training at 100% of his capacity rather than the 40% as he gets ready for his May 1st fight against Chris ‘Nightmare’ Arreola.

Ruiz looks a lot thinner and more confident than he has in years. If he dispatches Arreola early and looks sensational, he might be a threat to the top guys.

Andy wants a trilogy match with Joshua, but he’s going to need to beat someone good like Deontay Wilder to earn that shot. There’s a good chance those two will meet in 2021 if Ruiz Jr takes care of business against Ruiz.

Ruiz (33-2, 22 KOs) is trying to turn his stalled career around with this latest comeback against former two-time heavyweight world title challenge Arreola (38-6-1, 33 KOs).

The two heavyweights will be meeting in the main event on May 1st on FOX Sports PBC Pay-Per-View from Dignity Health Sports Park in Carson, California.

Ruiz hadn’t seen action since his loss to Anthony Joshua in their rematch in December 2019, and he looked bad in that fight. Sadly, Ruiz ate his way to the 280s after celebrating his seventh-round upset win over Joshua in June 2019.

It remains to be seen if Ruiz will be an improved fighter with him training harder and coming into his fights at a lighter weight. Sometimes fighters that take off a lot of weight don’t improve.

Indeed, their game suffers after the weight loss, and they’re unable to punch with the same power they did when carrying around more weight.

“Thanks to God, I became the first Mexican heavyweight champion,” said Andy Ruiz Jr to Fighthype. “This is just the beginning. Everyone has seen me at 40 to 50%. Now I’m getting ready to be at 100%. It’s a really big difference.”

The flaws that Ruiz showed in his loss were already present throughout his career, particularly in his defeat against Joseph Parker. Losing weight and putting out more effort might not change the slow feet that Ruiz has.

It’s fair to say that if Ruiz doesn’t figure out how to cut off the ring and attack his opponents, he’s not going to have success when facing the elite.

The blueprint that Parker created and Joshua followed will be used by every quality heavyweight that faces Ruiz from this point on.

Chris Arreola probably won’t follow the blueprint because he’s someone that hasn’t shown the ability to move around the ring.

“Everyone has their own style and own journey,” Ruiz Jr said when asked if he’s the next ‘evolution of Arreola.’

“I think this was my journey, and I was born to be the first Mexican heavyweight champion because this is what I’ve been praying and wishing my whole life for,” said Ruiz

Andy’s new trainer Eddy Reynoso is going to get credit from the boxing public if he’s able to bring him all the way back to world championship status. It’s going to be a lot harder this time for Ruiz because the element of surprise is gone.

Whoever Ruiz fights from this point on will be wary of exchanging with him. Joshua looked like he hadn’t done his homework preparing for the fight, which ended up costing him. 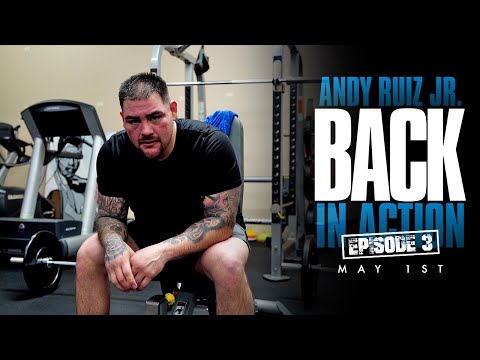 “It’s going to be a good action fight; me and him are going to go toe-to-toe,” said Ruiz Jr about his fight with Arreola on May 1st. “Like I said, anyone is dangerous.

“Anyone that is 250 lbs, 210 lbs, everyone is dangerous. It only takes one punch to change the whole fight.

“All I’m going to say is I’m going to train my a** off to win,” Ruiz Jr said of his comeback fight against Arreola.