Ruiz literally looks like an entirely different fighter from the 283-lb blob that Anthony Joshua easily out-boxed in December 2019 in their rematch in Riyadh, Saudi Arabia.

That 12 round unanimous decision defeat still angers Ruiz, as he feels that he didn’t give it his best shot in terms of his training for the contest.

Not only has Ruiz lost approximately 60 lbs in coming down from 310 lbs, but he’s also showing mobility that is arguably better than superstar Canelo (55-1-2, 37 KOs). Ruiz, 31, doesn’t have Canelo’s upper body movement yet, but he’s clearly got faster feet than him despite outweighing him by roughly 80+ lbs.

Ruiz is going to need fast feet for him to defeat former two-time heavyweight world title challenger Chris ‘The Nightmare’ Arreola (38-6-1, 33 KOs) in their fight on May 1st on FOX Sports PB Pay-Per-View at the Dignity Health Sports Park in Carson, California,

“Eddy sees the potential that I have, and he told me that I needed to be disciplined if I was going to work with him,” said Ruiz this week during his virtual news conference to discuss his fight with Arreola. 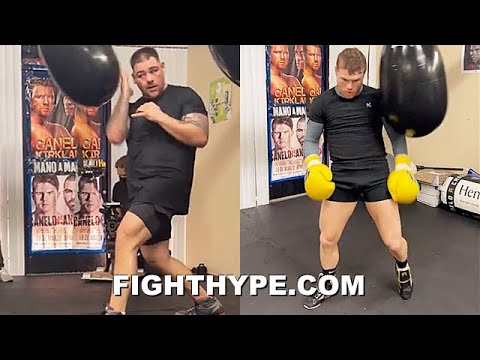 “I don’t think I’ve ever been truly 100 percent dedicated until now. It’s a blessing to be learning from Eddy every single day,” said Ruiz.

With Arreola’s incredibly high punch output and strong chin, Ruiz Jr will need to use his feet to limit the number of shots he’s hit with Arreola.

While Ruiz can lose weight and add movement to his game, he’s never going to be able to match Arreola in his punch output. Chris’s work rate is like that of a 130-pounder. He’s capable of throwing nonstop shots for an entire fight, and Ruiz isn’t built for that type of fighting.

Arreola is a freak of nature with his ability to throw punches, and these aren’t light shots that he’s throwing. The 40-year-old Arreola can throw with a lot of power, and he can do damage if Ruiz makes the mistake f standing directly in front of him for the entire fight.

In Arreola’s last fight against Adam Kownacki, he threw 1125 punches in losing a highly questionable 12 round unanimous decision in August 2019.

Arreola has the type of offense that could give Ruiz a lot of trouble if he cannot use his feet to stay away. Ruiz likes to take breathers after throwing punches, and he won’t be able to do that against Arreola because he’ll be right on top of him.

The fight took place in Brooklyn, New York, where Arreola was the B-side visiting fighter against Kownacki. Arreola feels that, at worse, he deserved a draw in that fight, and even that is him being generous.

“It wasn’t so much the punch output that improved for me in the Adam Kownacki fight, but it’s the fact that I could throw combos when I wanted to,” said Arreola.