By Dan Ambrose: Shawn Porter is focused on getting either Terence Crawford or Errol Spence Jr for his next fight. At this point in his career, Porter (31-3-1, 17 KOs) only wants the big match-ups against WBO welterweight champion Crawford (37-0, 28 KOs) and IBF/WBC champ Spence.

Crawford said last Saturday night that he still wants a fight against Manny Pacquiao next, and he’s hoping that his management can make it happen.

As long as there’s a sliver of a chance for Crawford to get his long-awaited dream match-up against the Filipino star Pacquiao, he’s not going to look in Porter’s direction.

Is Porter scaring Crawford away with his neediness?

What Porter has going against him in his hopes of landing a fight against Spence or Crawford is that he’s done NOTHING since losing to Errol in 2019.

Former IBF 147-lb champion Porter has fought just once in the last two years, beating German fringe contender Sebastian Formella by a 12 round unanimous decision in 2020.

“I haven’t said too much about it. I think my dad has spelled it out to you in terms of what I have going on and the adjustments I need to make within myself,” said Porter to Fighthype about a fight between him and Crawford. 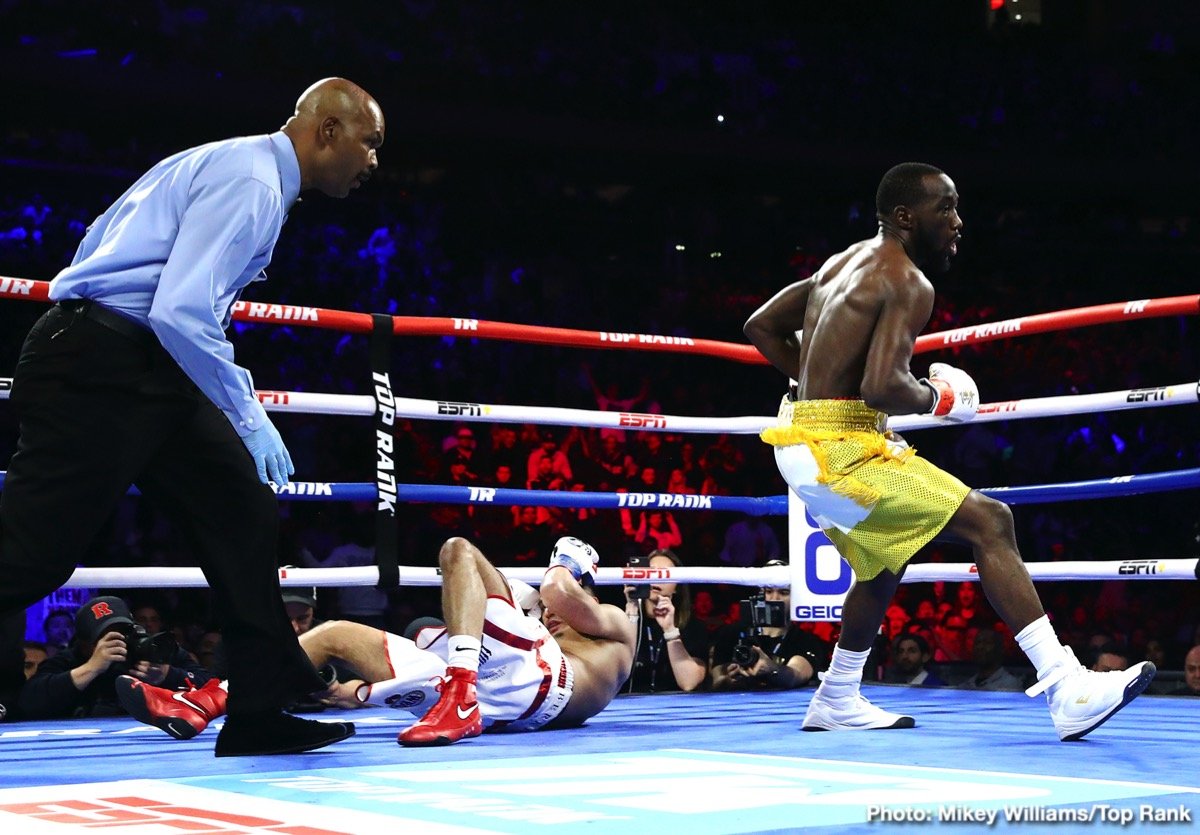 “So I think before calling out Terence Crawford or making a big statement about fighting him at all, I should definitely make sure I’m in the right space physically, mentally, spiritually. That way, I can be ready for a challenge.

“I still feel that’s the biggest fight that can be made in the welterweight division,” said Porter.

“I really dig the idea of getting in the ring with him [Crawford], and the training and preparing for him, I like that too.

“That is a fight that I would love to have shortly,” Porter said about his dream of facing Crawford.

Right now, Crawford and his promoter Bob Arum are under the delusion that they’re going t get a fight against Pacquiao.

But if they were paying attention to the news on Sunday, they’ll know that Pacquiao wants $40 million to fight with Crawford.

Arum doesn’t likely have $40 to give Pacquiao for a match against Crawford, and it’s improbable in this environment that a foreign country will come up with a huge site fee to pay to place the Pacquiao-Crawford fight there. 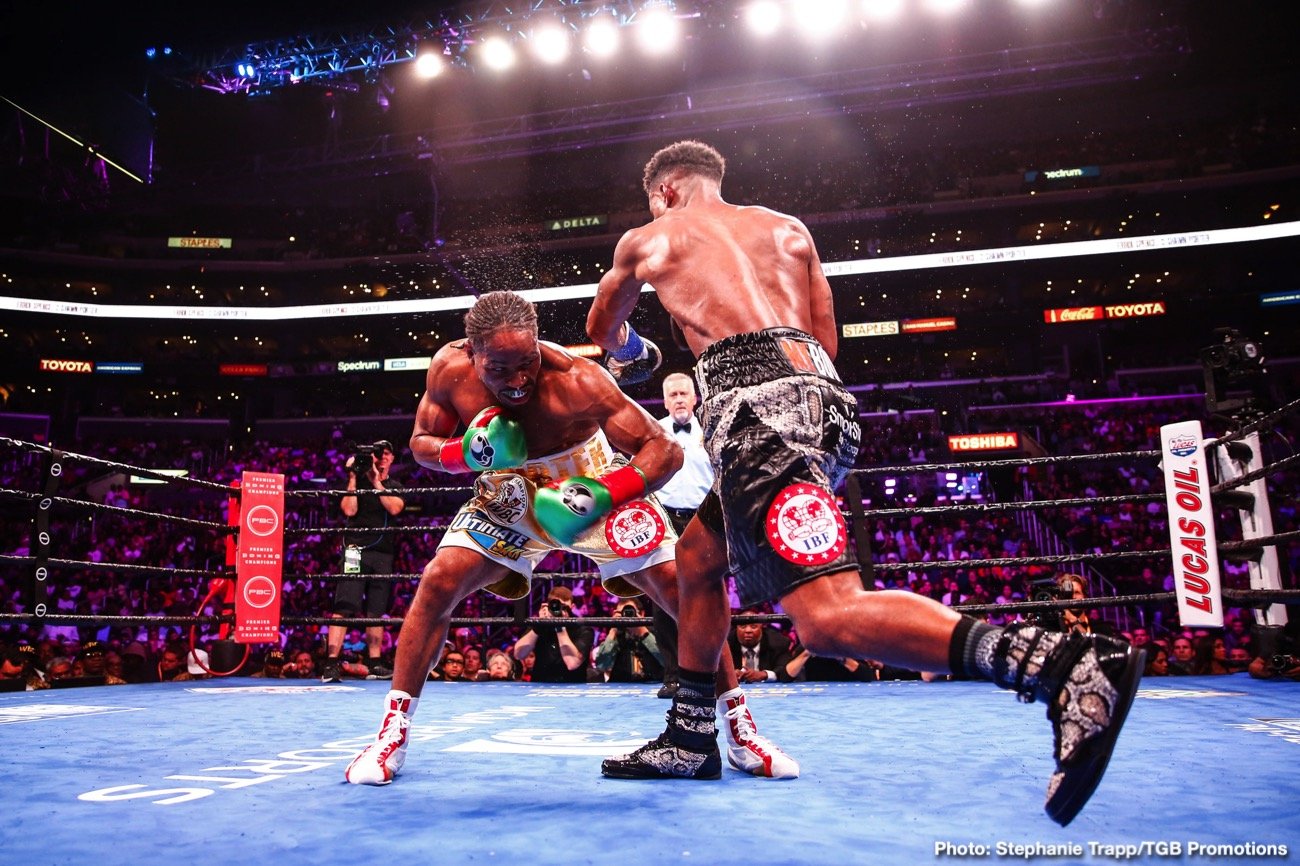 “The conversation after the fight was, ‘Oh, what about Shawn Porter and Terence Crawford?’ And I’m like, ‘What about it? I’ll show you about it.’

“I want the biggest fights that can be made, and I want to be a part of that. And I don’t want to commentate Terence Crawford and Errol Spence Jr.

“I want to fight Terence Crawford or Errol Spence Jr., So that’s kind of where the heat comes from since the fight with Formella.

“I don’t just want to commentate and do that. I’m not entirely in commentary mode and all that kind of stuff.

“I still have a few challenges out there that I see for myself. I just feel that Terence Crawford is the biggest challenge right now that they’ll give me,” said Porter.

It’s good that Porter is aiming high by targeting Crawford and Spence, but he needs to include WBA ‘Super’ welterweight champion Yordenis Ugas on his list. Porter would likely have a good chance of getting a rematch.

Ugas has been asking for a rematch with Porter ever since he lost a controversial 12 round split decision to him in March 2019. If Porter can’t fight against Crawford or Spence, Ugas would be an excellent third option.

Porter will be turning 34 in October, and he cannot sit and wait on the sidelines for the fights against Spence and Crawford.

Crawford can be outboxed

“Manny Pacquiao is [WBA Champion] in Recess right now. You always got to be better,” said Porter when asked if he’d need to be better for a fight against Crawford than he was against Spence for him to beat him.

“Even in another fight against Errol Spence, you’re asking me what adjustments I would make and what I would have done differently and so far.

“I really don’t know. I just know in my next fight, I will be better because that’s what it takes.

“So even looking at Terence Crawford, I know his style and how he likes to fight and all that kind of stuff.

“Case in point, Tyson Fury and Deontay Wilder. We did not see that coming.

“But I do think that if you’re doing the right things, you can beat whoever is across from you at whatever they do best,” said Porter.

If Porter is leaking his game plan on how he intends on attempting to beat Crawford, he could be in for a big disappointment. He’s now going to outbox Crawford, and if he tries that, he’ll be playing into his hands.

Most boxing fans believe the single best way for Porter to dethrone Crawford is to use the same game plan to beat Andre Berto and Paulie Malignaggi.


« Warrington makes statement on defeat, no mention of rematch