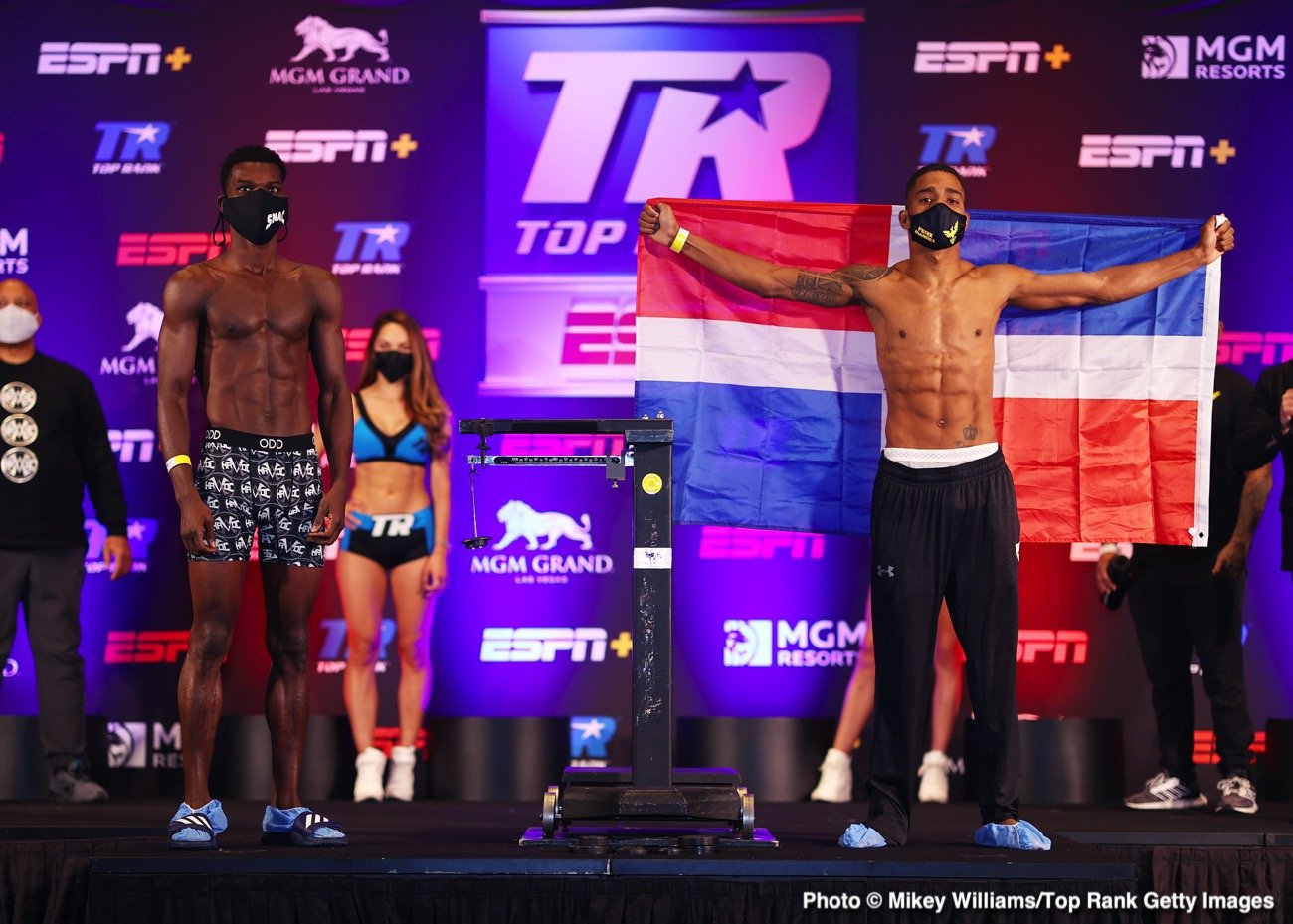 By Jim Maltzman: Richard Commey and Adam Lopez will be fighting tonight in their respective clashes on ESPN in a Top Rank card in ‘The Bubble’ at the MGM Grand in Las Vegas, Nevada. Fight fans outside the US can watch the fight on FITE TV.

The recently knocked out former IBF 135-lb champion Commey (29-3, 26 KOs) will be facing Jackson Marinez (19-1, 7 KOs) in a scheduled 10-round fight in the headliner position at light welterweight.

Lopez and Sanchez have something in common, with both having been beaten by former WBO featherweight champion Oscar Valdez in the last two years. They did give Valdez a tough time in losing, but they still lost nonetheless.

The 24-year-old Adam Lopez is the favorite for tonight for obvious reasons. He’s got the power advantage, and he’s immensely talented. He’s only lost to the best in defeats against Valdez and Stephen Fulton.

You can argue that Lopez will likely never win a world title in his career, but he’s fun to watch, and he makes it interesting.

Initially, the card was headlined by the light heavyweight battle between knockout artist Joe Smith Jr and Maxim Vlasov, but that match was capped after Vlasov tested positive for COVID-19. The vacant WBO 175-lb belt would have been on the line for that match. 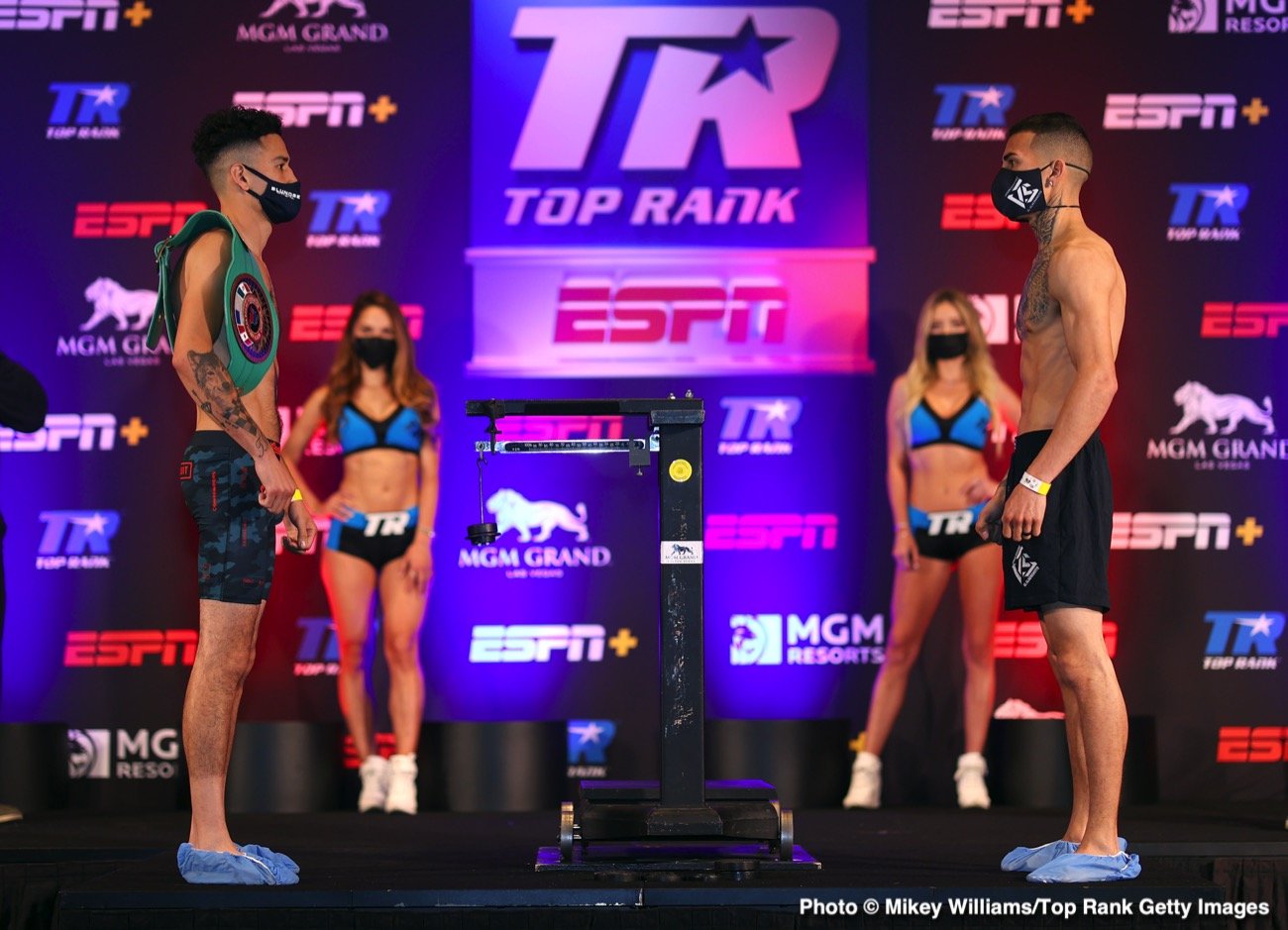 With Vlasov having pulled out due to illness, the co-feature bout between former IBF lightweight champion Commey and Marinez was moved up to the main event.

Commey weighed in at 136 lbs last Friday at the weigh-in for his match tonight against the 30-year-old Dominican Republic fighter Marinez.

For his part, Marinez came in at 135.5 lbs. Obviously, with no title on the line, Commey and Marinez is fighting a little bit above the 135-lb limit for their clash.

Tonight will be the first fight for former IBF lightweight champion Commey since he was knocked out in the second round by Teofimo Lopez on December 14, 2019, at Madison Square Garden in New York.

The pandemic has gotten in the way of the Ghanian Commey returning to the ring sooner.

Marinez fought well enough to win, but the judges gave it to the A-side fighter Romero, who boxing legend Floyd Mayweather Jr promotes.

It seemed like an easy fight to score from watching it, but the judges gave more credit to Romero based on his harder-landing shots and tuned out the constant shot that Martinez landed throughout the 12-round contest.

Marinez will be giving up power once again when he enters the ring tonight against the 33-year-old Commey. 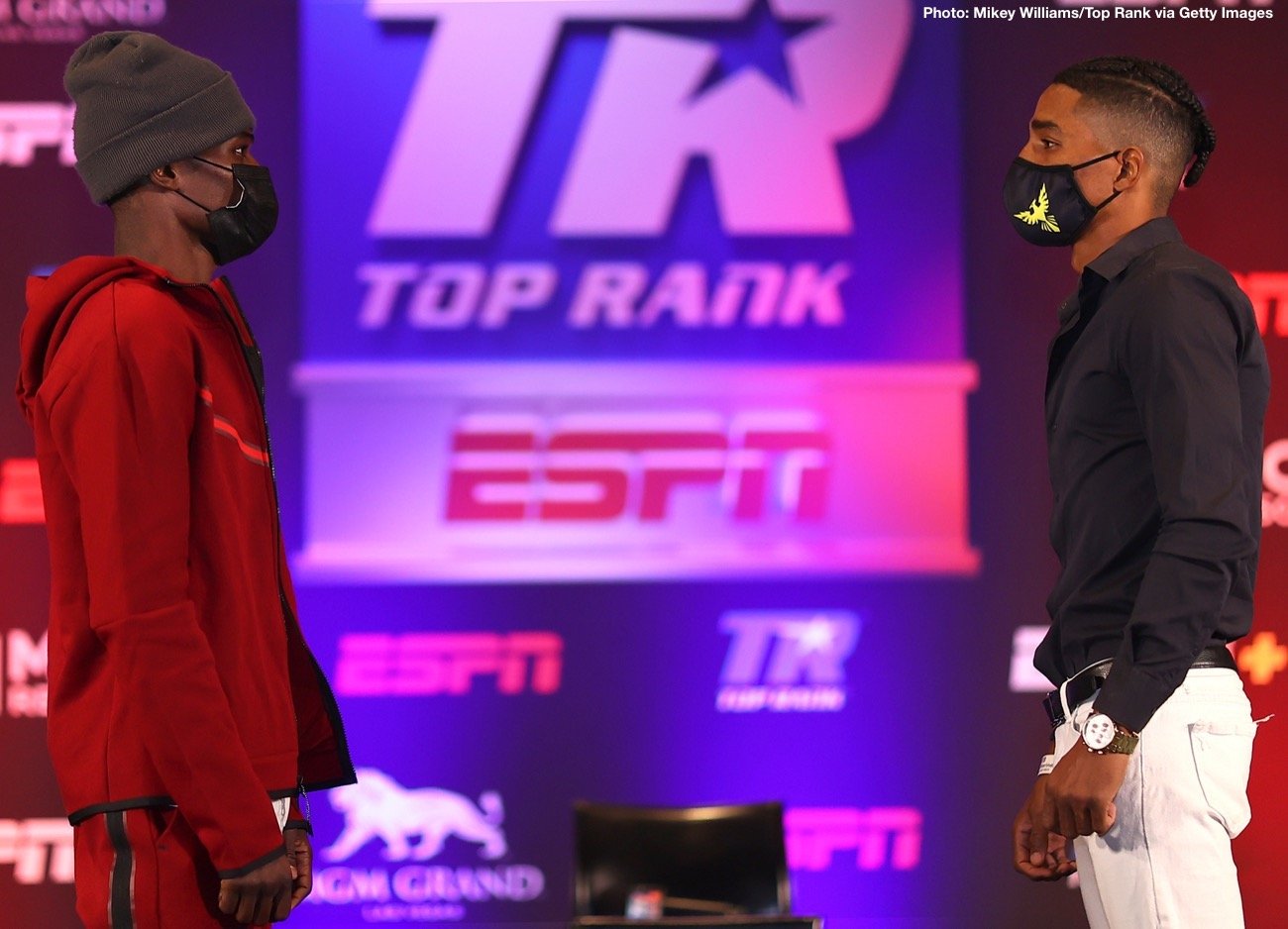 If the fight goes to the cards, there will be the potential of the judges giving it to the harder-hitting Commey, even if he’s outworked by Marinez.

Hopefully, the scoring makes sense and doesn’t enrage the boxing public as the Romero vs. Marinez fight did.

It’s a must-win fight for Commey tonight, as he can’t afford to get beaten again if he wants to keep himself in a position to get a world title shot against one of the famous lightweight champions.

In addition to his KO defeat against Teofimo last year, Commey has been beaten by Robert Easter Jr, and Denis Shafikov by close 12 round split decisions. Those guys are not players in the 135-lb division today.

A loss tonight for Commey against #5 WBA Marinez would be a disaster for his career because it will likely knock him out of the top 10 and possibly the entire first tier of the division.

Five of the 21-year-old Anderon’s seven knockouts have come in the first round, which is a testament to his punching power. The 6’4′ Anderson still has a long way to go before he is ready to take on the division’s top 15 contenders.

Other fights on tonight’s Top Rank Commey vs. Marinez card:

Andy Ruiz Jr to face Chris Arreola in the spring »