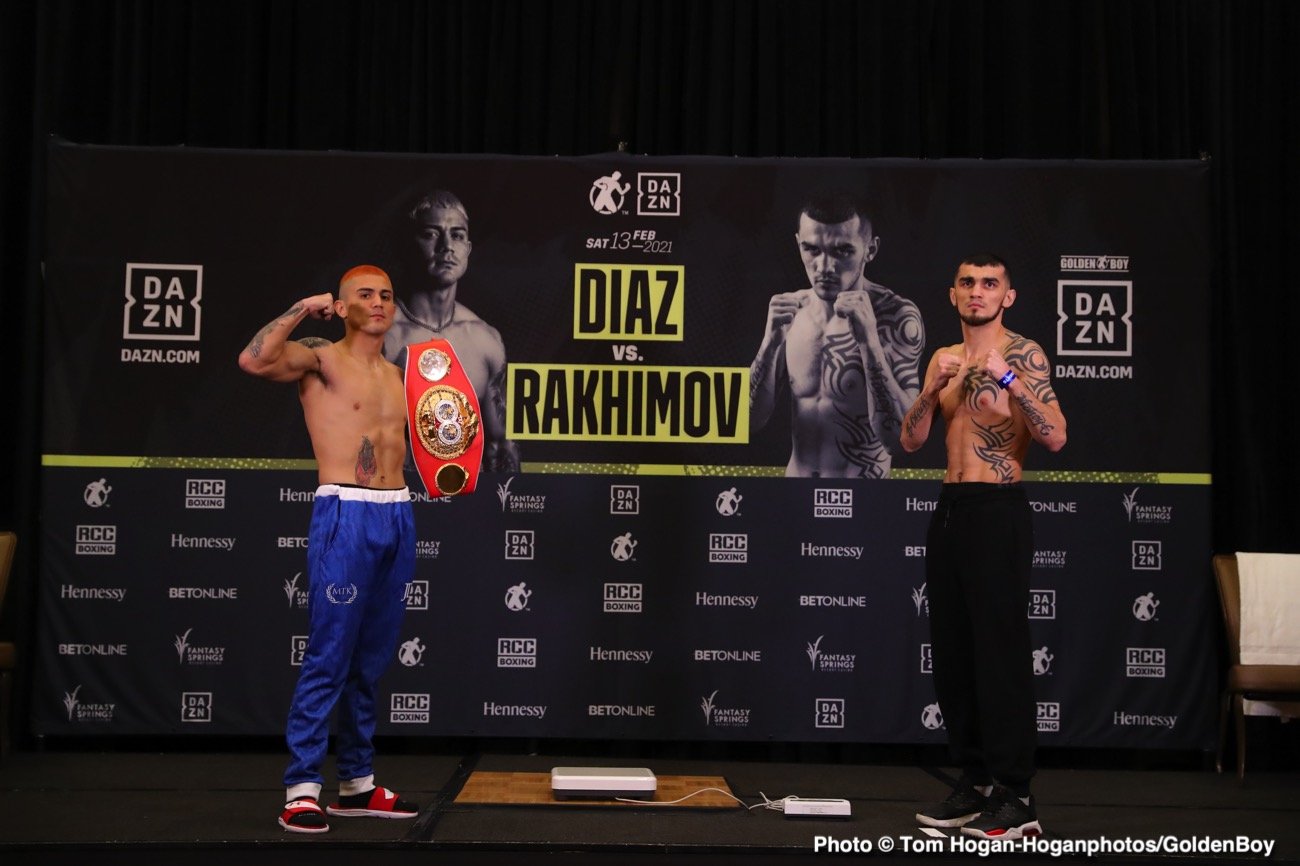 By Max Seitelman: Joseph ‘Jo Jo’ Diaz Jr shockingly came in 3.6 pounds over the super featherweight limit on Friday at the weigh-in for the defense of his IBF title against #1 Shavkat Rakhimov for their match this Saturday night on DAZN.

In a real disappointment, Diaz (31-1, 15 KOs) weighed in at a chunky looking 133.6 lbs and was subsequently stripped of his IBF 130-lb title.  As a result, the title will be on the line for the 26-year-old Russian Rakhimov (15-0, 12 KOs) but NOT for Diaz Jr when the two invade the Fantasy Springs Casino, in Indio, California.

Rakhimov showed professionalism, coming in at 129¾ lbs, and looked in great shape, which is more than you can say about Diaz Jr. His physique looked smooth as if he’d not been training hard.

With Diaz Jr having been out of the ring for 13 months since he captured the IBF 130-lb title from Tevin Farmer in January 2020, he had plenty of time to get in shape to make weight for his FIRST title defense for his belt.

Call it a lack of discipline or whatever for Diaz, but he’s now an ex-champion.

The best Diaz can hope for now is to win the fight against the unbeaten Rakhimov, and then hope that the International Boxing Federation allows him to battle for the vacant IBF title in his next match against the next highest-ranked available contender.

It’s interesting that Diaz missed weight because he’s been talking boldly about himself all week, making it sound like he was going to make weight and easily beat Rakhimov.

Diaz had to know all week that he wouldn’t make weight, as he’s looked like a rehydrated 135-pounder during interviews.  His face looked filled out, and his upper body showed no signs of resembling a 130-pounder.

This is Diaz’s fifth fight in the super featherweight division after moving up in weight from 126 in 2019. It might be a good idea for Diaz to consider going up to 135 at this point in his career.

If Diaz can’t be counted on to make weight in a reliable manner, he needs to quit the division and try his hand at fighting at 135. Who knows? Perhaps Diaz might be able to edge out one of the Four Kings at lightweight to take their place.

We’ll see if the IBF will allow former champion, #7 Tevin Farmer, to fight for his old belt next. That would give the sanctioning body a talented fighter that could potentially win the belt rather than one of these three contenders:

As the IBF champion, the 28-year-old Diaz was considered to be just a belt-holder and not the #1 guy at super featherweight.