By Dan Ambrose: Mikey Garcia still hasn’t heard anything from Manny Pacquiao about him giving him the fight that he’s been campaigning for endlessly for the last year.

Mikey thinks Pacquiao is looking for a low-risk match that pays well against Ryan Garcia or Conor McGregor rather than give him the fight.

The former four-division world champion Mikey says Pacquiao was supposed to fight him last year in July, but then their plans were messed up by the pandemic.

Many boxing fans view Mikey as just a businessman now, a fighter trying to hustle fights against top welterweights like Pacquiao.

They believe that Mikey is no longer serious about his career, and is just cashing out against fighters that he has no chance of beating.

Mikey wouldn’t be perceived like that if he’d beaten at least one credible contender at 147 in the last year, but he hasn’t. He’s fought twice at welterweight, and his record is 1-1, which isn’t ideal for the kind of fight he wants against Pacquiao.

If Mikey, 33, doesn’t get a phone call from Pacquiao’s management, he says he wants to fight one of these top 147-pounders:

Garcia would like a title shot against WBA welterweight champion Yordenis Ugas. That fight interests Mikey a great deal, as it would give him a chance to capture Ugas’ WBA ‘Super’ 147-pound title.

“I heard from [Sean] Gibbons in another interview that they still want to fight me,” said Mikey Garcia to PBC Podcast.

“Unless I hear directly from Manny, or I sit down at some table and they actually present me with an actual contract, I can’t take anything seriously.

“And if that’s going to be the case, where I’m not even pursuing the fight with Manny as much anymore,” said Mikey.

If Mikey could get his hands on that belt, he could use it as bait to get a lucrative rematch with IBF/WBC champion Errol Spence Jr. Mikey was beaten by Spence by a lopsided 12 round unanimous decision in 2019, but he wants a rematch to try and avenge that loss. The chances of that happening for Mikey are zero unless he can capture the WBA belt from Ugas.

Garcia points out that he wouldn’t have the chance to fight for a world title at light welterweight because the belt-holders, Josh Taylor and Jose Ramirez, are both with Top Rank.

Mikey letting his condition go during the pandemic wasn’t a smart move for him, as a fighter like Pacquiao would want to face someone ready to start camp.

The way that Mikey has been looking lately, he may need a fat-farm extended training camp to take the weight off before he would be ready for a fight.

Additionally, it’s not a good thing that Mikey hasn’t stayed busy during the last year because he’s been out of sight and out of mind.

With the horribly one-sided loss Mikey suffered against Spence, he needed a win over a credible opponent at 147 for him to be taken seriously as an option for Pacquiao.

“A fighter like Danny Garcia was always interesting, a fighter like Shawn Porter or Keith Thurman,” said Mikey. “I would like to go after Ugas because he’s a champion.” 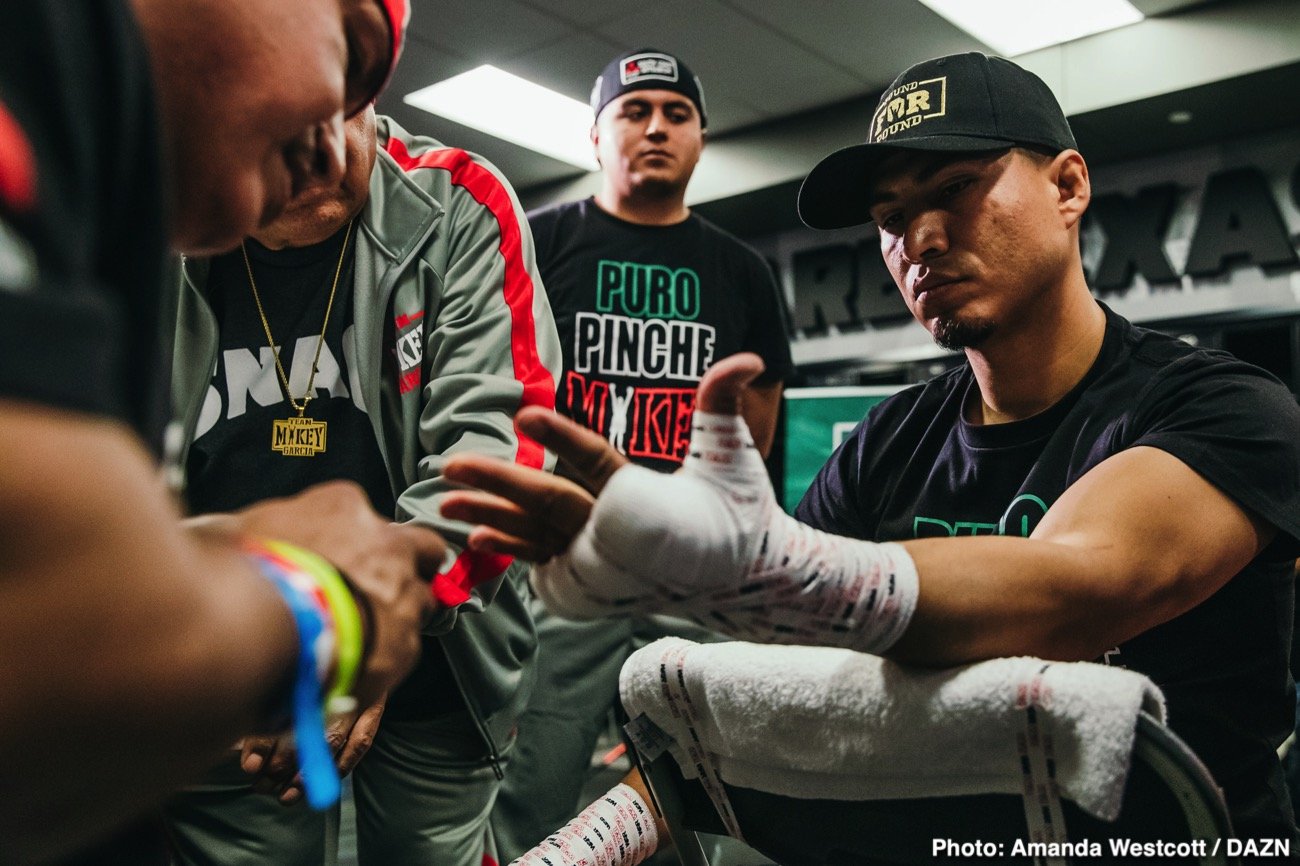 You can’t count Mikey’s victory over Jessie Vargas last year in February as a win that was impressive enough for him to get a fight against Pacquiao.

Vargas is not a major player at 147, and at the time Mikey fought him, he wasn’t ranked at all in the top 15. Years ago, Vargas captured a couple of division titles, but he didn’t beat anyone good to win those belts.

What Mikey should have done in the last 12 months is take on someone like Danny Garcia or Keith Thurman to earn a fight against Pacquiao.

Instead of doing that, Mikey sat inactive, getting fat and talking about how he’d like to face Manny.