By Max Seitelman: Former WBO heavyweight champion Joseph Parker was outweighed by his massive opponent Junior Fa by 20.3 pounds on Friday at the weigh-in for their headliner fight on DAZN on Saturday at the Spark Arena in Auckland, New Zealand.

While there’s no great deal of interest worldwide in the Parker vs. Fa fight, it’s a big deal for the New Zealanders. Both fighters are from that country, and this is a match-up to prove who’s #1 at heavyweight over there.

The Parker-Fa fight winner will get moved up the rankings and be in a better position to eventually challenge for the WBO heavyweight title in 2022 or 2023.

Parker, 29, held the WBO heavyweight title from 2016 to 2018 before losing it to Anthony Joshua by a 12-round unanimous decision. In Parker’s next fight, he lost to Dillian Whyte by a 12 round majority decision in 2018.

Since then, Parker has turned his career around with three straight victories over Alex Leapai, Alexander Flores, and Shawndell Terrel Winters.

“I train to go the distance, I train to go 12 rounds, but my goal in this fight is to go and have fun,” said Parker to Behind The Gloves on his fight against Fa.

“I know that when I have fun, I let my hands go, and I can do a lot of damage. In the past, I’ve been more cautious winning fights on points, but that’s not exciting. I know what I can do when I throw my combinations, and I want to get him out of there. That’s the goal,” said Parker.

Parker must throw more punches and aggressive on Saturday night against Fa. What’s held Parker back in the past was him not attacking his opponents and letting his hands go during his important fights.

The main reason Parker lost to Joshua and Whyte was his failure to go after those two in the way he needed for him to win.

Although Parker did show fire in the 12th round against Whyte in dropping him, it was too late by then to pull out the victory. The way that Parker fought in the final round, he would have beaten Dillian if he’d fought that way earlier.

“I just want to fight whoever is in the way for me to get another world title shot,” said Parker. “People say, ‘What about this guy?’

“But if I don’t get past Junior Fa. I want to fight all those guys, but I have to put on a good performance and be dominant,” said Parker. 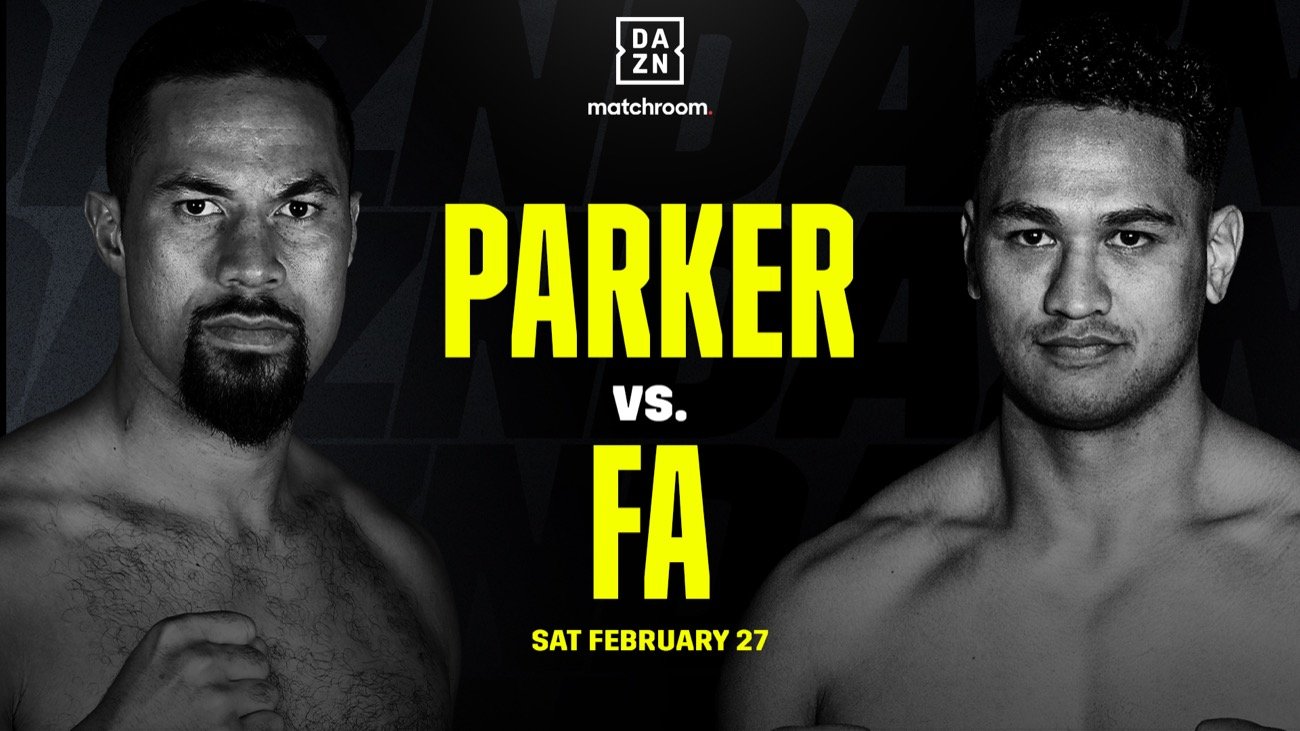 Beating Fa isn’t going to give Parker a title shot straightaway against the winner of the two Anthony Joshua vs. Tyson Fury fights. Parker will need to stay busy and keep waiting until he gets his shot.

The Joshua-Fury winner is expected to vacate the WBO title, and the belt will then go to the winner of the Oleksandr Usyk vs. Joe Joyce fight. As a result, Parker will need to face the Usyk-Joyce fight winner if he wants to recapture his WBO strap.

“There’s a lot that has been said about why I pulled out of the fight, and basically my health wasn’t 100%, so the doctor pulled me out of the fight,” said Parker in talking about him pulling out of the Chisora match because of a spider bite.

“It was one of those fights where I wanted to postpone it because it was already locked in. He spent a lot of money in training camp and sparring partners and he had to fight on that day.

“So even though I wanted to push it out, he wasn’t willing to. Now that I have Junior Fa in front of me, I have to take care of him first before I can look to Chisora.

“Chisora vs. Usyk was a good fight,” said Parker. “That was a fight where we had to see how Usyk would do against a proper heavyweight.

“Against Chisora, he was good. He got tagged a few times, but he was game. Usyk fought real smart. I think a fight with Usyk and Joe Joyce. 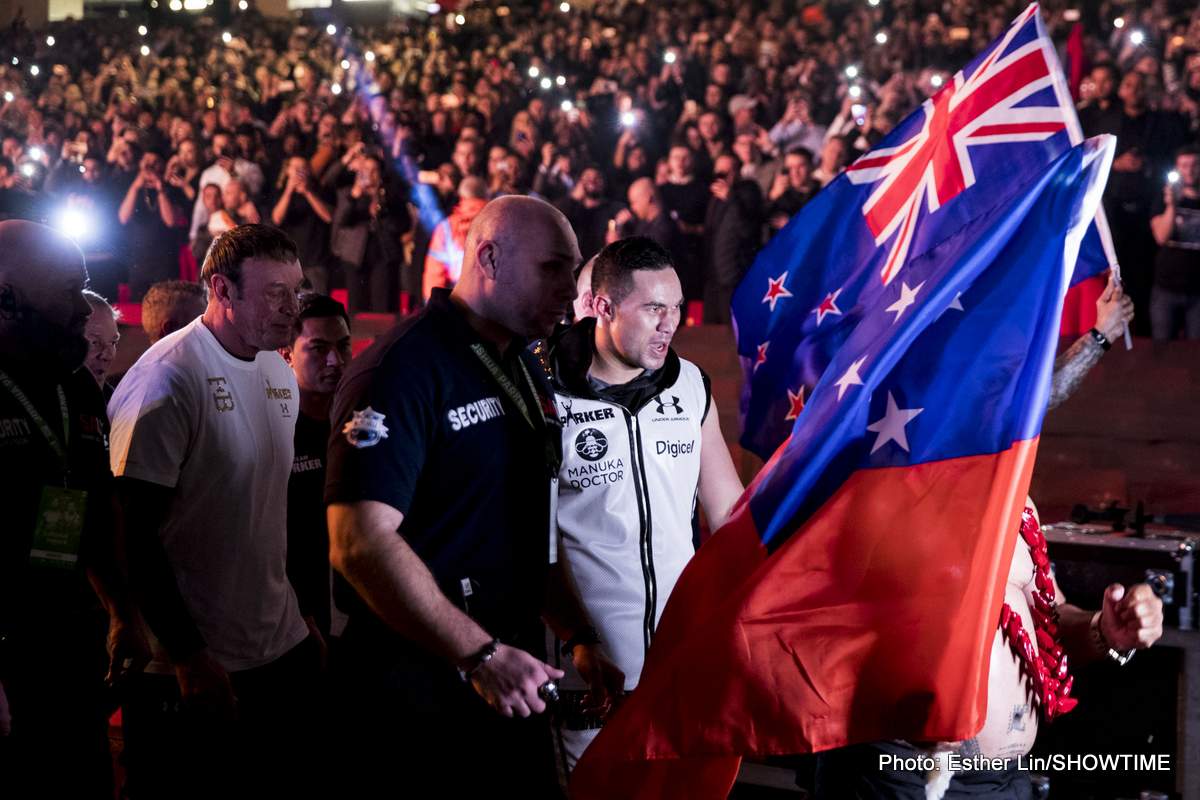 “You got the boxer, and then Joe Joyce. He’s coming off a good win [against Daniel Dubois], and he looked really good. He [Joyce] boxed really well and used his jab.

“He kind of weathered the storm in the beginning and then came back. With his experience, he was able to get the win. For me, it’s a good fight, Usyk and Joe Joyce. You can’t write Joe Joyce off,” said Parker.

Parker must take notes of the Usyk-Joyce fight because he could be meeting up with the winner of that fight at some point. If it’s Usyk, Parker will need to put a lot of pressure on him, and not let him move around freely.

“I sort of lean toward Fury more,” said Parker in picking Tyson Fury to beat Anthony Joshua. “And I like the way he moves, and we saw in his last fight that if he wants to fight you, he’ll come forward and fight you. And I think he can fight going backwards, he can fight going forwards.

“I think the old Joshua would have gotten him out of there faster,” said Parker about Joshua’s last fight against Kubrat Pulev. I think he’s a lot more cautious now.

“If you hurt someone, what are they going to do? They’re going to come and hurt you. He’s a lot more cautious, but he did what he had to do to get him out of there. He looked good in doing it too,” Parker said.