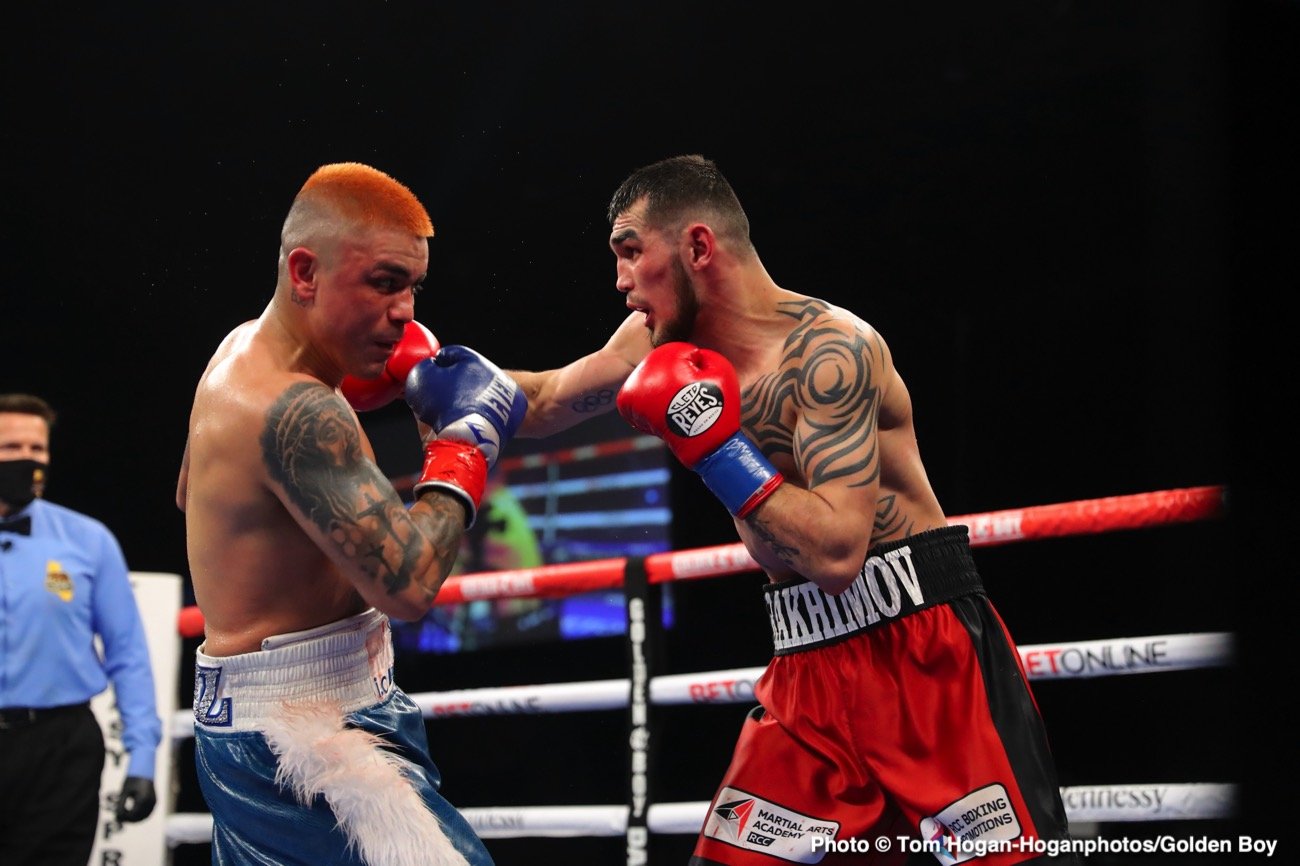 By Mark Eisner: Shavkat Rakhimov (15-0-1, 12 KOs) put in a good performance in battling the recently stripped former IBF 130-lb champion Joseph Diaz Jr (31-1-1, 15 KOs) by a competitive 12 round majority draw in their headliner match on DAZN.

Fighting without fans at the Fantasy Springs in Indio, California, the Russian fighter Rakhimov and Diaz Jr both put in good performances, but they weren’t able to impress the judges enough to get the win. The scores were as follows:

Boxing News 24 gave it to Diaz Jr by a 115-113 score based on doing the better work down the stretch against the tired Rakhimov. It was a fight where Diaz Jr had problems with the hand speed and the combination punching of Rakhimov.

That more than anything is what kept Diaz Jr from getting the win tonight, as he wasn’t as quick as Rakhimov, and was having issues when he was throwing speedy combinations in the middle rounds.

In the first two rounds, Diaz went for the knockout, landing big shots and emptying his gas tank in hopes of stopping the 26-year-old Rakhimov, but it didn’t work. Diaz didn’t have enough power to do the job on Rakhimov, and he ran out of gas.

Diaz didn’t want to admit it, but it looked like he ran out of gas in the middle rounds.

“It was a close fight. The guy was throwing a lot of combinations, but it was landing on the gloves. I thought I should have won the fight. My conditioning was good,” said Diaz.

Obviously, Rakhimov was hitting a lot more than just gloves with his punches that he was throwing. He was connecting well with shots, but he failed to throw enough in the championship rounds for him to get the ‘W’ tonight.

Joseph landed at a better rate and looked like he was in charge of the fight in the second part. You could see the difference in experience clearly from watching how more confident Diaz was compared to Rakhimov. The Russian fighter looked uncertain much of the time, and he failed to fight as aggressively as he needed to.

Rakhimov was frequently charging forward, throwing shots, and then clinching. Diaz took advantage of the time in close to throw shots, but Rakhimov acted as if he understands that you’re allowed to keep throwing punches during a clinch.

Also, Rakhimov was exposing his back to Diaz while trying to get away from him, which led to him being warned on several occasions by the referee to stop doing that. Diaz took advantage of the situation by punching Rakhimov in the back when he did this.

Rakhimov’s trainer Freddie Roach is going to need to get him to stop using this move because it’s not going to work for him during his career if he continues to turn his back to his opponents.