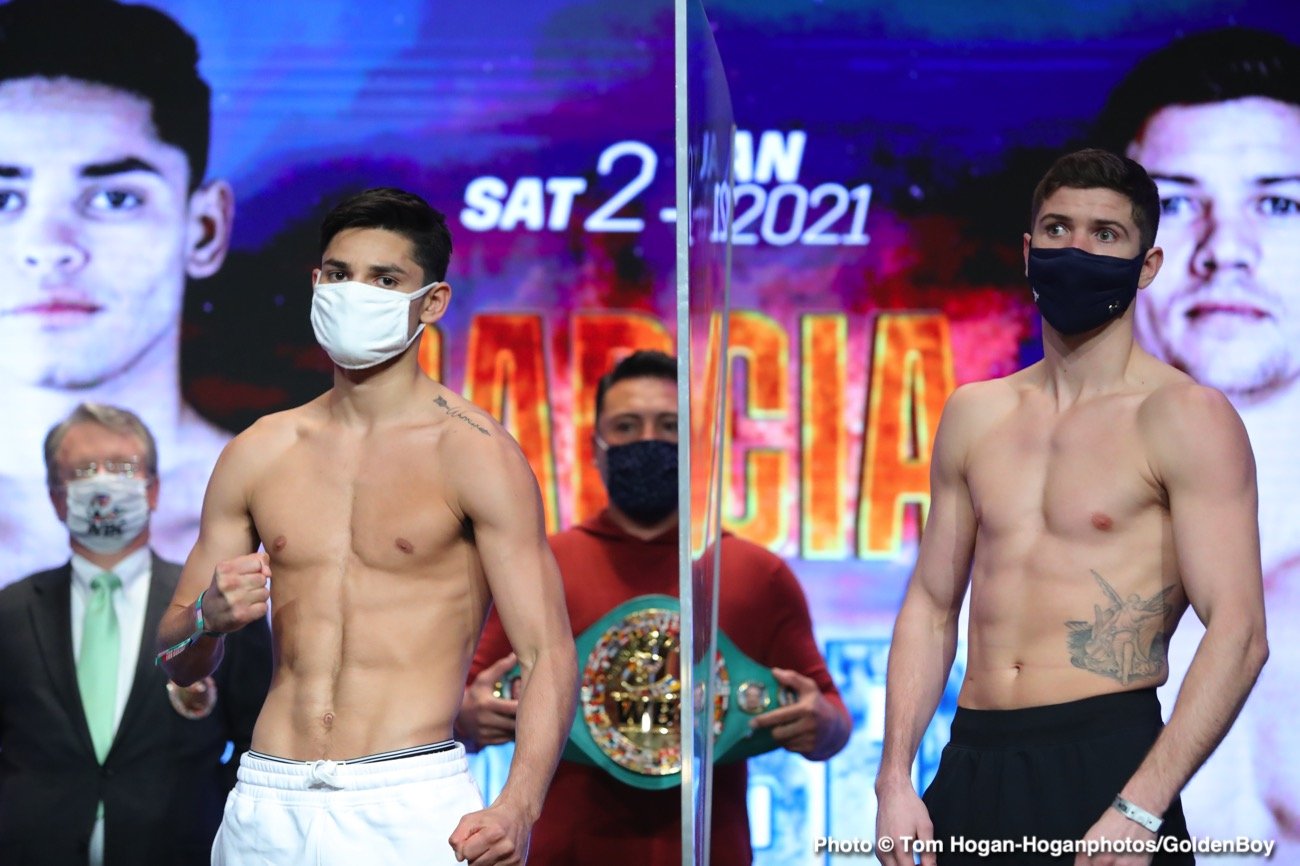 By Sean Jones: Ryan ‘Kingry’ Garcia and Luke Campbell both weighed in at 135 pounds on Friday at their weigh-in for Saturday’s match between the two lightweight talents on DAZN at the American Airlines Center in Dallas, Texas.

Of the two, the 22-year-old King Ryan surprisingly looked more drained with shadows under both eyes and appeared irritable as if he’d just eaten a bitter lemon.

In contrast, the older fighter 33-year-old Campbell looked ready to step into the ring and start fighting.

Campbell was cheerful, smiling, and much more at ease compared to Ryan. Maybe none of this will matter come Saturday when the two lightweights get in the ring to battle for the vacant interim WBC 135-lb title.

Ryan looked like he was trying hard to intimidate Campbell with his death stare, but it didn’t work. Campbell seemed oblivious to Ryan’s attempts to frighten him with the mean looks that he was giving him.

But just based on how Campbell looked, Ryan could have his hands full when he gets in there with the southpaw 2012 Olympic gold medalist

Other weights on the Garcia vs. Campbell card:

“He messaged me support, a good luck message, telling me to go out there and do the business and show them what I’m all about,” said Luke Campbell to IFL TV about Vasily Lomachenko contacting him to give him support for his fight with Ryan Garcia.

“That sounds like that [Lomachenko supporting him], so that was a nice message from him.

“It’s another fight. I’ve been in with 200 other opponents throughout my boxing career so I feel well-prepared. I’m ready for this fight.

“Yeah, the plan is to take care of business here, and we’ll see what happens next,” Campbell said when asked about his thoughts on challenging WBC lightweight champion Devin Haney if he comes out victorious against Ryan on Saturday.

“I’m going to bring that win home, and I’m going to represent the country when I beat this guy. Us Brits can do it,” said Campbell.

Vasily Lomachenko predicts a win for Campbell, and he believes he’ll have no issues evading the left hook from Ryan.

Campbell lost a competitive 12 round decision to Loma last year in an exciting fight in the UK. With that performance, Campbell gained Lomachenko’s respect.