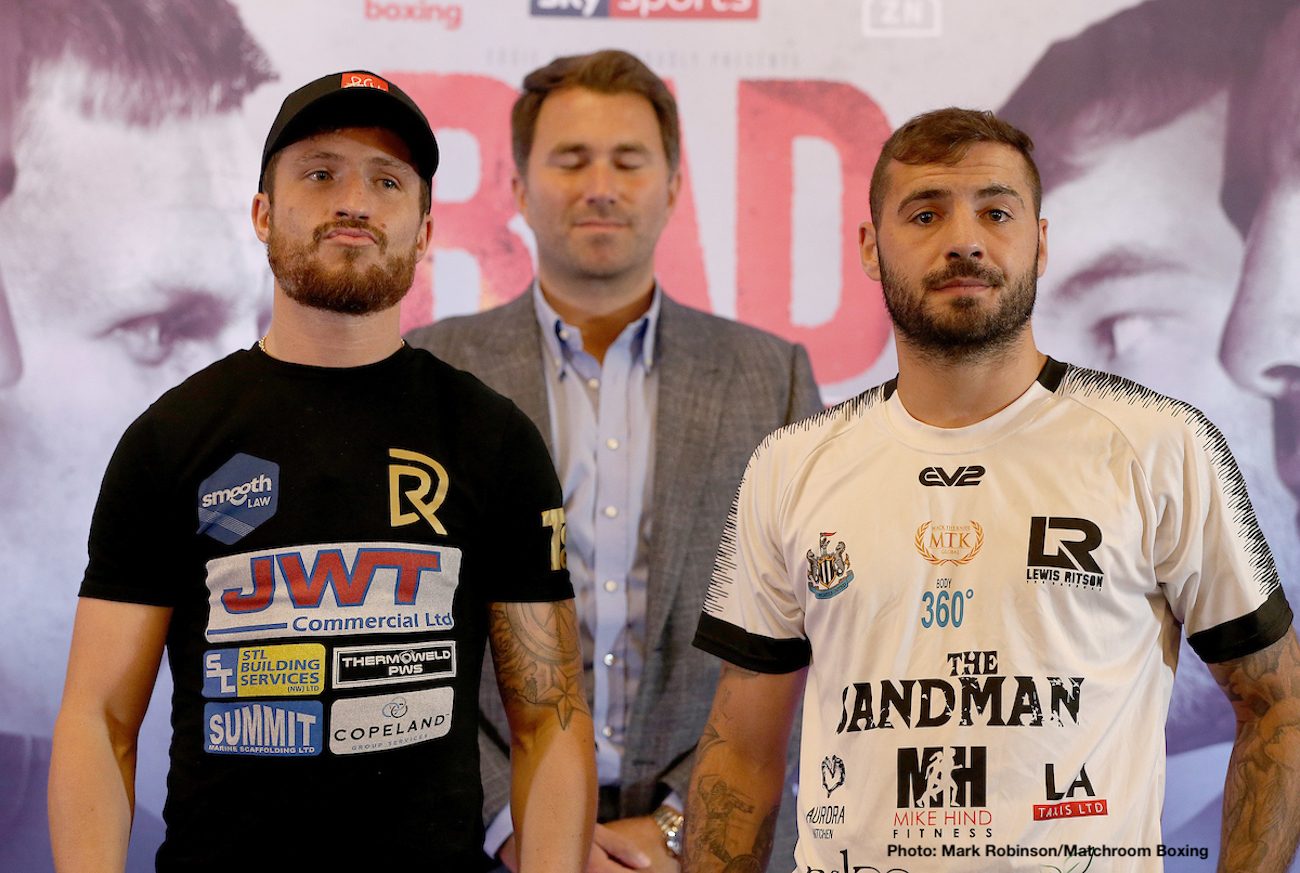 By Ian Aldous: It’s easy to forget, but in January 2020, the world was a place of normality, compared to the current conditions and restrictions we now find ourselves living under. It was back then, when Robbie Davies Jr. (20-2) decided to make a fresh start and begin training at the famous Ingle gym in Sheffield. He parted company with Dave and Joe Tonks following a hotly-disputed unanimous decision loss to Lewis Ritson, in October of the previous year.

“It cut me deep, getting beat by Lewis Ritson and not getting the decision,” the thirty-one year-old admitted. “I walked into the Ingle gym after so many weeks (away from training) and I was like someone who’d just got off the couch, when you looked at me. I wasn’t in shape like I normally am and next minute; I got told I was fighting in six/seven weeks.”

“Luckily enough, it was like the last show with crowds before the pandemic hit.”

The rebuilding process began with an eight-round points win against an Argentine journeyman determined not to be stopped. Despite learning nothing from the bout, in hindsight, Davies Jr. was just happy to have fought in 2020. Since then, he’s been doing his utmost to learn and be the very best boxer he possibly can.

“I’ve got more time to learn my craft and learn the new ways with Dom,” the super-lightweight from Liverpool explained. “As time’s gone on, I know all fighters say it when they go to a new gym, ‘I’m a new fighter’, but I honestly do believe I am. I feel like a new animal, so to speak.”

“I’m a young thirty-one. I haven’t got many miles on the clock.”

The former British, Commonwealth and European champion will remain at 140-pounds and has his sights set on two particular opponents: The man holding his old European strap, Sandor Martin, and a deserved rematch with Lewis Ritson.

“I was meant to be fighting for the European (title) in this next fight, so that would have got me straight back in there, in the mix if I’d won that,” Davies Jr. said. “I feel like I was doing too many posts on social media (because) the champion (Sandor Martin) was always the first person to view all my stories on Instagram (laughs)! I don’t follow him. He follows me and next thing; he’s moved the goalposts and says he doesn’t want to fight me in Britain. We were right up for it.”

“I honestly don’t know if it’s completely disappeared, but he wants the date to go back and he wants it in Spain now.”

2020 subsequently turned into a turbulent period of camp after camp with fight dates falling by the wayside, one after another. It was a tumultuous year for the new father, juggling family life in Liverpool and training in Sheffield, without the financial reward that an actual fight brings.

“I had a newborn in September and thought I was fighting in October. Then the goalposts got moved again and I got told I was fighting in November (or) December. Sandor Martin, the European champion had a warm-up fight in December, ready for January. So, I was like, ‘fine, let’s have it in January’. I had no Christmas. I was away a lot over Christmas; didn’t get to spend as much time with my baby and family as I’d like to. Then, when January came around, the pandemic hit again, and no fighting was allowed in January.”

Martin now appears to be getting cold feet as he has since claimed he may not be prepared, despite partaking in an eight-round warm-up bout in December.

“We’re up for fighting him whenever. I don’t really want a tune-up fight either. Get me the biggest fight you can get me. That’s the way I’m looking at it.”

If not Martin, an obvious candidate would be Newcastle’s Lewis Ritson, the WBA’s No.2 ranked 140-pounder. Their first clash in October 2019 was an instant classic. Davies Jr. ventured into a packed Newcastle Arena to settle their grudge, in a cracking contest that delighted those in attendance and viewers watching on Sky Sports. The home fighter walked away with a decision win that many, myself included, did not agree with.

“I’d love the rematch but it never gets talked about and I just don’t know why?” the Neil Marsh-managed fighter asks. “With the pandemic, or not, it’s two British kids that like to have a tear-up. It could easily be made. Dillian Whyte/Povetkin, Fowler/Fitzgerald and Courtenay/Ball – they were all good fights and straight away they’re talking about the rematches. I don’t know why mine’s never, ever spoken about.”

Ritson was on the receiving end of another ‘gift’ when claiming a subsequent decision win last October, this time against Miguel Vasquez. I’ve yet to find a single observer who concurred with the shocking scorecards, and merely illustrates the need for the rematch with Davies Jr. Both are promoted by Matchroom, so it should be simple to make.

“If there was any more I could do to push it, then I would.”

It’s a domestic showdown that makes sense. Only the staunchest of Geordies could tell you, with a straight face, that Ritson won by four or five points, as the official scorecards would have you believe. Davies Jr. avenged his only other loss and is fiercely determined to repeat that feat against Ritson.

If he’s able to reclaim the European title, it might prove to be a useful bargaining chip to help make the elusive rematch with Ritson. If not, he’ll continue to relentlessly learn under the tutelage of Dominic Ingle in Sheffield, all whilst working in the gym with the likes of Kid Galahad, Liam Williams and Willy Hutchinson – the dream team – all looking to make 2021 their year.