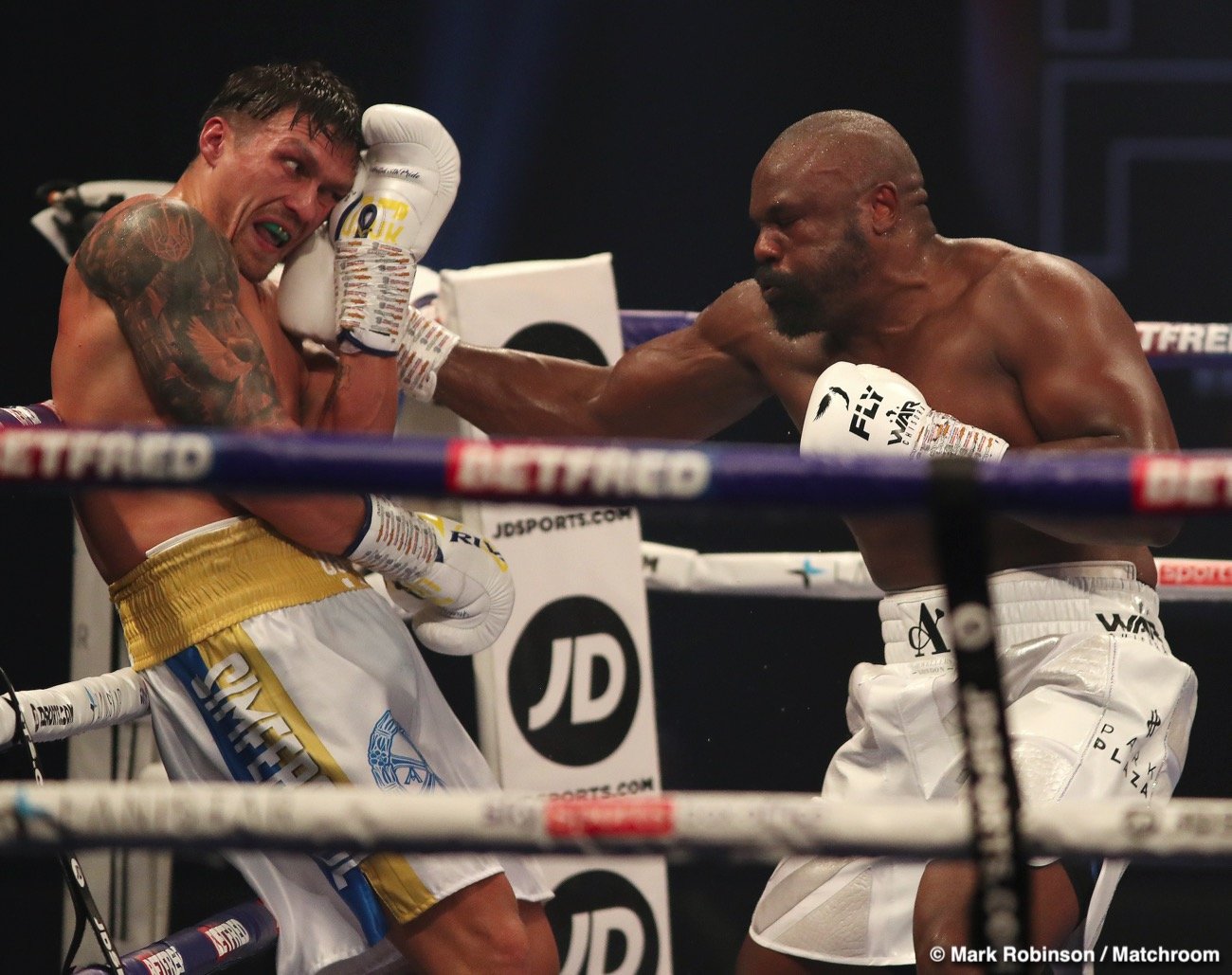 By Charles Brun: 2016 Olympic silver medalist Joe Joyce and Oleksandr Usyk are “close to a deal” for a fight for the interim WBO heavyweight title, which would allow Anthony Joshua’s match against Tyson Fury to be the undisputed championship.

Dan Rafael is reporting the news of the unbeaten Joyce (12-0, 11 KOs) and WBO mandatory Usyk (18-0, 13 KOs) to be “close” to having a fight made for them to scrap for the interim World Boxing Organization title.

It’s unclear whether the recently turned 34-year-old Usyk will be given any step aside payment from Joshua for him to agree to lt him face Fury.

If there isn’t a step aside deal in place for Usyk, it doesn’t make sense for him to let Joshua bypass him to face Fury with his WBO title at stake. Usyk would be better off telling Joshua that he’s going to need to vacate his WBO strap unless he’s willing to give him some green to step aside.

How much would be a fair price for Usyk to receive to step aside is open for debate. Charles Brun believes $5 million is a good number. That would be the kind of money that Usyk would be getting if he were to fight for a world title.

Heck, Usyk has already been passed over twice for his overdue mandated title shot for the WBO belt. Asking for $5 million is being kind on Usyk’s part if he insists on getting that total. Usyk is no spring chicken, and he can’t sit around and wait until he’s 40 until he finally gets his title shot, can he?

If Usyk forced his hand, Joshua would need to vacate his WBO title, which would make it available for the Usyk-Joyce clash. Usyk should have the full WBO title on the line for his fight with Joyce because it would help with promoting the fight.

That’s why it’s likely that Usyk is getting a sizable step aside payment to let Joshua and Fury fight for the undisputed championship.

“It’s not a done deal yet but the camps of heavyweights Oleksandr Usyk and Joe Joyce are close to a deal to meet for the vacant interim WBO title, which would clear one of the remaining hurdles to making the undisputed heavyweight title fight between Tyson Fury and Anthony Joshua,” said Dan Rafael on his newsletter site.

NEWS:   Hearn comments on Arum wanting Joshua vs. Fury in UK in 2022

It’s thought that once Joshua and Fury fight the first time in May or June, the winner will only temporarily be the undisputed champion. A week or two later, they’re expected to vacate the WBO title, and the winner of the Usyk vs. Joyce fight would then be elevated to the full WBO heavyweight champion.

If it doesn’t play out that way, the winner of the Usyk – Joyce fight would need to wait until 2022 to face the last man standing between Joshua and Fury after their two clashes. This isn’t how it’s likely to play out, though.

The Joshua vs. Fury 1 winner is expected to vacate the WBO belt, which will result in the winner of the Joyce vs. Usyk fight becoming the full champ.

If Joshua or Fury will vacate the WBO title almost immediately after their fight, it hardly seems worth all the trouble to have it on the line.

Them fighting for the undisputed championship will be a minor thing in the promotion of the fight. Yeah, some boxing fans will focus on this bit of information, but not many. The fans want to see Joshua and Fury fight because view it as a great match-up between two of te

“For sure we’re working on it,” Sam Jones, Joyce’s co-manager said to Fight Freaks Unite this week. “That’s who we want next and I am confident it’s going to happen.”

Usyk beat Joyce by a five-round decision in 2013, but that was a rail-thin Joyce, who was 30-pounds lighter than he is now. Joyce has developed his jab and improved his punching power.

Usyk could have many problems dealing with the jab from the 6’6″ Joyce, and it wouldn’t be surprising if his face gets cut up to the point where the fight needs to be halted.

Ryan Garcia: I got to put Gervonta Davis to the side »