Gervonta Davis ready to fight Ryan Garcia in May or Sept. 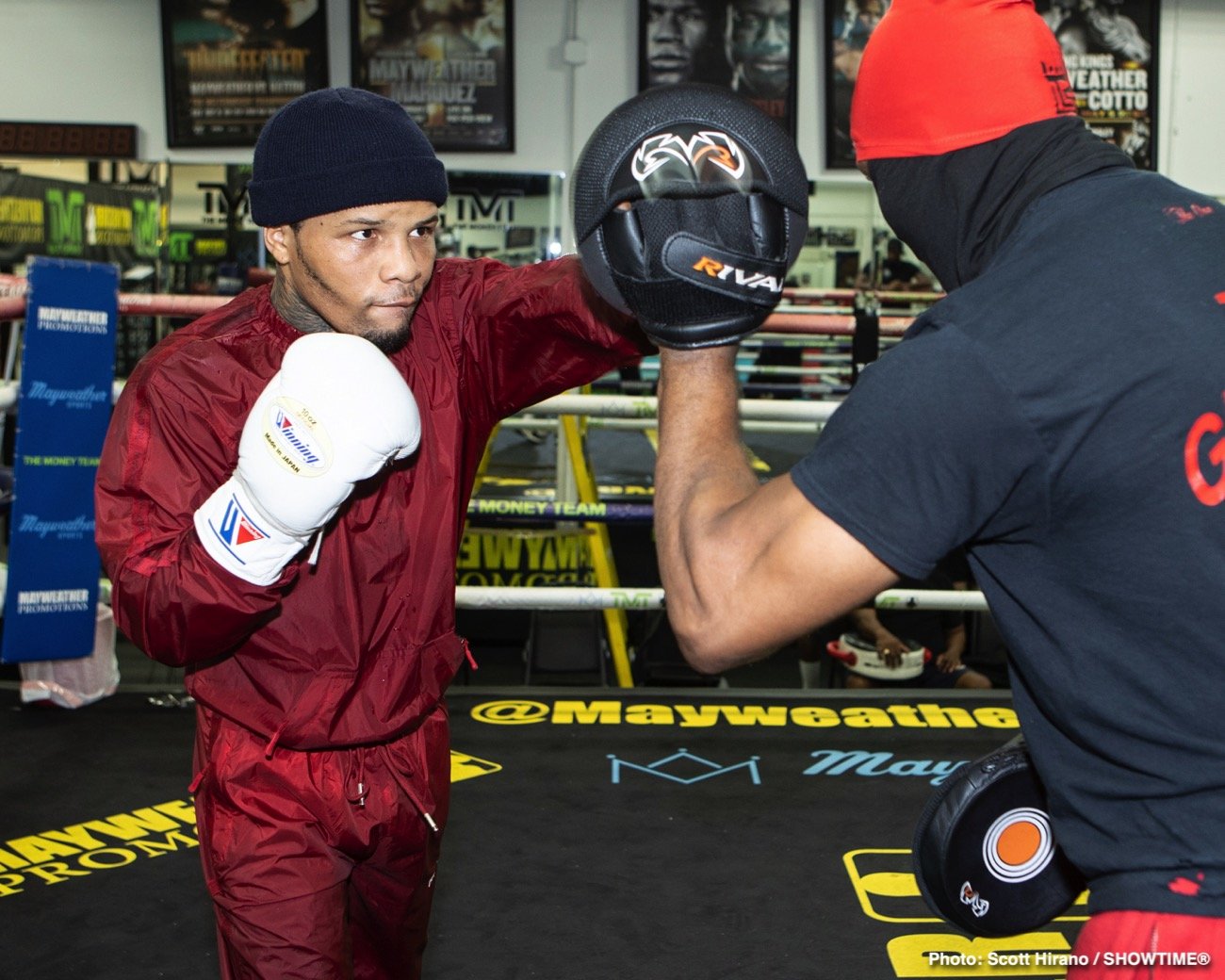 By Chris Williams: Gervonta ‘Tank’ Davis says he had a conversation with Ryan Garcia this week, and the two trash-talked and spoke about fighting.

The way that Ryan is seemingly obsessed with wanting to fight Tank and try and eat him, it’s reasonable to conclude that he’s a huge fan. There’s nothing wrong with Ryan being one of Tank’s fans, as he’s got a lot of them.

Hopefully, Ryan doesn’t come into the fight with Tank with a big chip on his shoulder, because he’s going to need to fight smart and think clearly if he wants to win.

WBA World lightweight champion Tank Davis, 26, is on another level than Ryan’s last opponent Luke Campbell, and we saw what he was able to do to him.

Campbell dropped Ryan in the second round, and repeatedly nailed him with left hands throughout their fight in Dallas, Texas last weekend.

“I’m definitely looking forward to fighting Ryan in my next fight, so I’m staying fit,” said Tank Davis to ESNEWS. “Yeah, that was my first time speaking to Ryan.

“It was just us talking trash. Him saying he’s going to knock me out in two rounds,” continued Davis. “To be honest, I think he’s a fan of mine with the way he was acting. He was acting all hyped.

“Mike was trying to see when we’re going to fight. It’s good for boxing. That’s crazy, so many millions in one basket. You know how that goes,” said Tank Davis about the millions of followers he and King Ryan have on social media.

“It’s hitting the top numbers, so we’re trying to see. And it’s me catching him with the right shot. It’s going to be tricky the first half of the fight, but once I get past it, it’s not going to take long for me to get in there and hurt him,” said Tank Davis.

Given what we saw in Ryan’s tougher than expected fight against Britain’s Luke Campbell last Saturday night, it’s reasonable to assume it won’t take long for Davis to break him down and score a knockout.

Ryan isn’t ready to take on a well-round fighter with Gervonta’s experience, and he shouldn’t be even attempting to take this fight. Golden Boy Promotions are arguably letting Ryan be the captain of his own ship, and he’s rudderless, heading his career into the rocks.

If Ryan continues to be the one that decides who he wants to fight, he’ll be washed up within a year or two. Losing to Tank will be the first blow, and from there, you can expect Ryan to want to fight Teofimo Lopez.

That could be another loss. By the time Devin Haney gets to Ryan, his confidence will be shattered, and he’ll be ready to be finished off.

“He must have some crazy power if he thinks [he’s going to knock me out],” said Davis when told about Ryan Garcia’s second-round knockout prediction. “He must think I can’t fight, I don’t know,” said Davis.

Garcia obviously knows that Tank Davis can fight, but he believes his power will be enough to carry him to victory. The ego in this one is very strong.

Ryan is so gung-ho about his own power that he believes he can knock out anyone in the 135-lb division, including Tank.

His overreliance on scoring knockouts to win his fights will eventually bite him on the backside, particularly when he gets in there with Tank.

For Ryan to avoid getting knocked out himself, he’s going to need to box Gervonta rather than brawl with him. But Ryan won’t do that if he believes that he can knockout Gervonta.

Davis wants to fight Ryan in May, not September

“Get ready, you know what’s going on,” said Tank when asked what message he has for Ryan Garcia. “We don’t even have to speak on it. I don’t know why he’s speaking on it.

“You know what’s going on. Get ready. You know the s*** is in motion, and may the best man win. Yeah, I called him,” said Davis when asked if he spoke to King Ryan ten minutes before his fight with Luke Campbell.

“I got his number. One of his girls gave it to me. I told him to handle his business, he’s going to need it. He was shocked I was on the phone, and then he was, ‘Alright.’

“Nah, I think it’ll be May. It’s not going to be September, but I don’t know. It doesn’t really matter to me,” said Tank Davis when told that Ryan said that he’d be fighting him in September. “I’ll fight him whenever.

“We’re on different sides of cultures. So for us to fight, it’s like when Floyd [Mayweather Jr] and Oscar [De La Hoya] fought. It was big.

You can understand why Ryan would prefer to fight Tank Davis in September rather than in May of this year. With crowds not likely to be back until later this year, a fight between Ryan and Davis won’t be able to take place in front of a large crowd.

Later this year, in the fall, the vaccine should be out by then, and boxing fans allowed back into sporting evens in large numbers. Ryan choosing September is a good safe bet for when fans are allowed back.

Of course, Golden Boy will need to keep its eye on the situation with the pandemic and crowds.

Gervonta was impressed by Garcia’s win over Campbell

“He did decent because that was the first time he got dropped like that, and at that high pace,” said Tank Davis on Ryan Garcia’s fight last Saturday against Luke Campbell.

“Him getting back up and acting like nothing happened, it was amazing. It was great, and he finished the job.

“I thought he did well. Yeah, I jumped up and I was shocked when I seen him get dropped, but I Tweeted right before that he runs into every shot.

“So I Tweeted right before that he’s going to run into something. He was running into shots all night. He can’t run into no shot with me for sure.

“I like fighting whoever gets in there with me. You can’t say that I’m afraid of fighting anybody if they’re not southpaw or orthodox. Whoever is in there that wants to fight me, I’m willing to fight them,” said Davis.

In failure analysis, you can see what led to Ryan getting dropped in the second round.

He had his guard down and was getting nailed repeatedly by Campbell’s left hands. It didn’t stop after the second round, though. Ryan continued to get hit with the same left-hand shots until the end of the fight.

We have to conclude that Ryan will be vulnerable to getting hit with the same kinds of shots in his next fight, be it Tank Davis or whoever.

With the likelihood of his problem continuing, Ryan will be vulnerable to getting hit repeatedly in his next fight. If Ryan’s trainer Eddy Reynoso has been lazy about fixing this problem, which has always been there, he needs to consider replacing him.

“We’re with different promotional, but if the fight makes sense, make it happen,” said Gervonta about a match between him and Vasily Lomachenko.

“I’m willing to fight all these guys. It just has to make sense. I see myself breaking him down in the later rounds and getting him out of there,” said Gervonta on his prediction for a fight against Lomachenko.

“How can I be ducking him when he never came out and said, ‘I want to fight Tank,'” said Gervonta when told that Teofimo Lopez said that he’s been ducking him.

How can he say I’m doing him. Even with the Devin situation, y’all never came out and said, ‘I want to fight Tank.’

“I don’t know,” said Tank when told that Leo Santa Cruz wants a rematch. “I wish him the best, though, whatever he does in his career.”

It’s going to be difficult for Tank Davis to get a fight against Lomachenko because the two are with rival promoters.

Unless Lomachenko and his promoters at Top Rank reach out to Mayweather Promotions to set up a fight with Davis, it’s best to let Loma stay on his side fight whoever.

With the huge number of super featherweights Top Rank has in their stable, Lomachenko has enough guys to fight for the remainder of his career.


« Adrien Broner taking his career seriously, is it too late?

Canelo Alvarez to defend against Avni Yildirim in U.S in February »