By Jeff Aronow: Gervonta ‘Tank’ Davis is on the target list for Vasyl Lomachenko when he returns to the ring in 2021 if he can’t get a rematch against Teofimo Lopez.

It would be a big risk for Lomachenko to be taking on the unbeaten WBA ‘regular’ lightweight champion Tank Davis (24-0, 23 KOs) in his first fight coming off shoulder surgery.

The surgery for Lomachenko was the second in the last two years, and it’s unclear if this problem will persist.

Lomachenko has taken a lot of criticism since his loss to Teofimo from fans, who don’t like his injury excuse. Many of them don’t believe Lomachenko was really injured.

Davis could be big trouble for Lomachenko

Tank is arguably a better fighter than Teofimo Lopez, and Lomachenko could be walking into a disaster if he takes that fight at less than 100%. If Lomachenko does face Tank Davis, he needs to make sure he’s firing on all eight cylinders.

In other words, the soon to be 33-year-old former three-division world champion Lomachenko can’t afford to go into a fight of that nature with an injured right shoulder again. 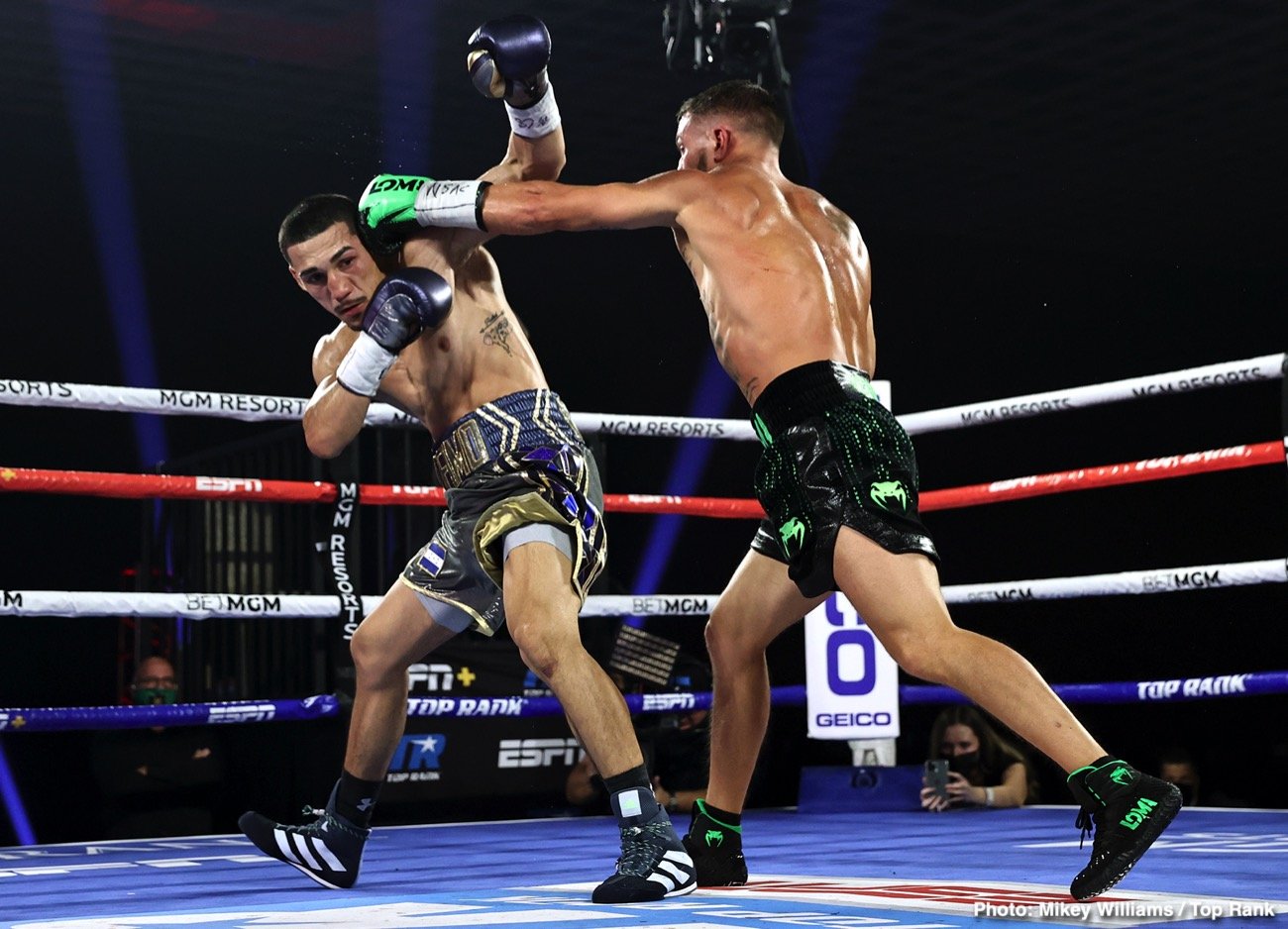 Tank might be a harder fight for Lomachenko than a rematch with Teofimo, considering the Baltimore, Maryland native has a better engine and can handle pressure a lot better.

Teofimo was falling apart against Lomachenko in the second half of their fight on October 17th, and that was against a one-armed fighter.

While it’s unlikely that Lomachenko will get a second fight with Teofimo, the good news is that he plans on staying at 135 rather than moving back down to 130.

Lomachenko has a lot more options for interesting fights at lightweight than if he were to move down to super featherweight and be stuck with no-name opposition.

The highly popular IBF/WBA/WBC [Franchise]/WBO lightweight champion Teofimo, 23, has already made it clear that he wants no part of facing Lomachenko again, and he’s leaning in the direction of an easy title defense against his IBF mandatory George Kambosos Jr. (19-0, 10 KOs) next.

Teofimo’s disinterest in facing Lomachenko again is telling, which suggests that he lacks the confidence to beat him a second time around.

“Personally, I prefer Davis, I like him more. He is more aggressive. Plus, he’s a southpaw. I like fighting southpaws,” said Lomachenko to SNOWQUEENLA.

“If we are talking about who I would want to fight next, if I had the opportunity, I’d fight him [Tank Davis]. ‘Okay, let’s go.’ I would choose him. Why not? I doubt they would make it happen right away,” said Lomachenko.

There’s little chance that Lomachenko will get a fight against Tank Davis soon, as his promoters at Mayweather Promotions want to match him against Ryan Garcia next.

If Ryan wins his fight this Saturday night against Luke Campbell, the Davis-Garcia fight will likely happen in the first half of 2021.

The only way Lomachenko will get a rematch against Teofimo is if he puts together a string of wins over the top lightweights. What could hurt Lomachenko’s chances of doing that is if he’s unable to get the top guys to fight him.

Ryan Garcia omits Lomachenko on his list of top guys he wants to face at 135, which isn’t surprising given Loma’s revelation of how their sparring sessions went.

Lomachenko said Ryan ran from him and wanted no part of mixing it up with him when they sparred. He says Ryan was preoccupied with protecting his face.

If Teofimo chooses to take only easy fights against fighters like Kambosos, it means that Lomachenko can forget about ever getting a chance to avenge his loss to him.

Although there’s no interest from U.S boxing fans in a fight between Teofimo and the little known Australian Kambosos Jr., it’s a safe fight for Lopez. Like a lot of fighters after tasting success, Teofimo has seemingly lost his interest in taking risks with his career, so he’s expected to take the fight with Kambosos Jr.

The Australian recently squeaked by Lee Selby with a close 12 round split decision on October 31. The 33-year-old Selby is well past his prime at this point in his career, and yet he still almost beat Kambosos Jr.

Despite winning the contest by a knockout, Tank, 26, struggled with the pressure and the high work rate from Santa Cruz in the first five rounds. At the time of the stoppage, Tank was ahead by the scores 48-47 x 3.